Autoblog answers all your questions about the 2018 Ford F-150

10
1 Review
1 Review
The F-Series pickup trucks are Ford's golden goose, having just marked an incredible 41 straight years as the top-selling pickup in the U.S. in 2017 and the 36th year as the best-selling vehicle of any kind. It's a remarkable streak for one of the longest-running models in the automotive world, with the F-Series dating back all the way to 1948.

The F-150 is the star, representing about two-thirds of F-Series sales. It's available in three cab styles — regular, super and crew — with either a rear- or four-wheel drive configuration and three pickup box lengths. There are seven trim levels, depending on the cab style and including the off-road Raptor variant, that bring added features.

Ford famously gave the F-150 an aluminum body and a steel chassis that benefitted from some nifty weight-savings tricks for 2015, the last time Ford gave the pickup a full redesign, to shed more than 700 pounds (in certain configurations) and help it meet tougher fuel-economy standards. The updates for 2018 are relatively minor, with new styling cues on the grille, headlights and tailgate, a rearview camera and dynamic hitch assist, more power and torque, and improved fuel efficiency. Inside, there are new materials and available interior colors, plus optional new active safety features, which are becoming more and more common on all new vehicles.

This buyer's guide aims to give you all the information you need to make an educated decision. It covers the F-150's safety and reliability ratings, engine specs, horsepower, fuel economy ratings and pricing. And we'll include a summary of the latest Autoblog test-drive review of the 2018 F-150. 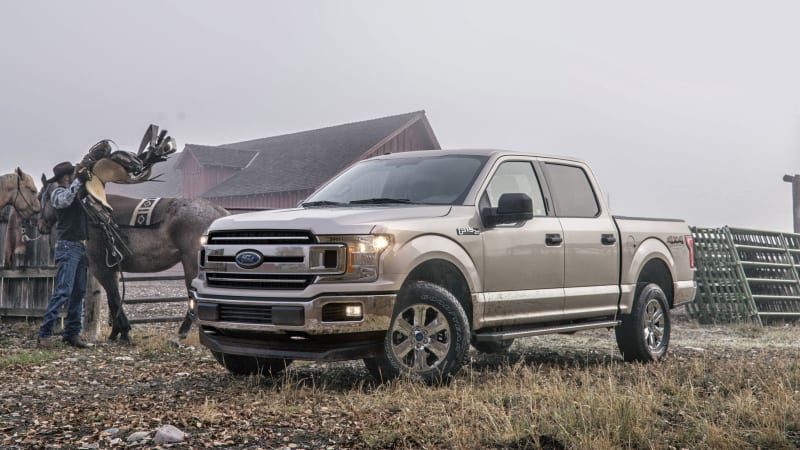 The National Highway Traffic Safety Administration has issued full reviews for only the 2018 Ford F-150 Super Crew in 4x2 and 4x4 drive trains, giving them an overall crash-test rating of five stars, earning top marks for protecting the driver and passengers against injury. It gives the F-150 five stars for both frontal and side crash protection, and four stars for rollover resistance tests. NHTSA reviewed six configurations of the 2017 model-year F-150 with identical results.

The Insurance Institute for Highway Safety says the 2018 F-150 qualifies as a "Top Safety Pick" for 2017 by virtue of its early release date, but not for the tougher criteria of the 2018 award. It earned "good" ratings for five of six crashworthiness tests but was not rated for the newer passenger-side small overlap crashes, which replicate crashes involving the front corner of a car. IIHS gives the 2018 F-150 a "superior" rating for front crash prevention but a "poor" rating for headlights, another of its new areas of measurement, and a "marginal" rating for the ease of use of its LATCH anchors for child seats.

Ratings may differ for the F-150 from other model years, so be sure to visit the NHTSA and IIHS websites to review ratings on the specific vehicle you're researching.

As of this writing, the 2018 Ford F-150 has not been included as part of the widespread Takata airbag recall, though older models were. 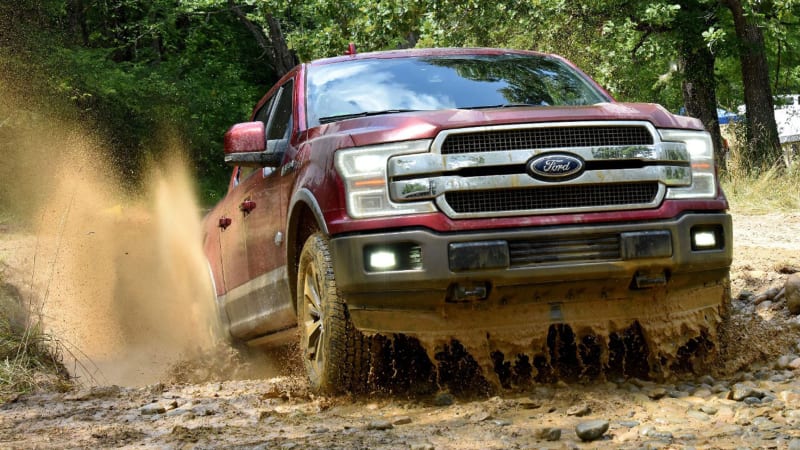 J.D. Power most recently reviewed initial quality in the 2017 F-150, which is largely similar to the 2018 model year. It gave the F-150 three out of five possible stars — "about average" — for overall quality, and the top rating of five stars each for overall performance and design, and predicted reliability. Diving deeper, J.D. Power gave the F-150 five stars for things like style and performance; four stars for comfort, instrument-panel features and the quality of body and interior features; and three stars for things like the design of features and accessories, and overall quality.

We should note that Autoblog has voiced some issues with the way J.D. Power weighs serious and less-serious reliability issues. You can read more about that here.

Ford has issued several recalls of the F-150:
In all cases, Ford said it will issue fixes at dealerships. 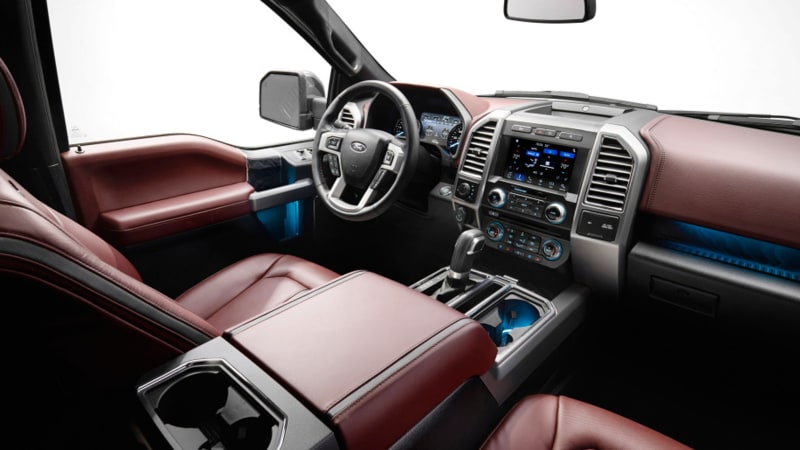 How much interior and cargo room does the Ford F-150 offer?

Seating capacity ranges in the 2018 Ford F-150 from three in the Regular Cab up to six people in the SuperCrew, so passenger volume likewise varies, from 64.6 cubic feet in the RegularCab to 131.8 in the SuperCrew. Bed volume also ranges from 52.8 up to 77.4 cubic feet, depending on whether you choose a 5.5-, 6.5- or 8-foot bed. (Note that not every bed length is available with every cabin.)

Since SuperCrew is the most popular F-150 variant, we'll use that cabin size for comparison's sake with two competitors: 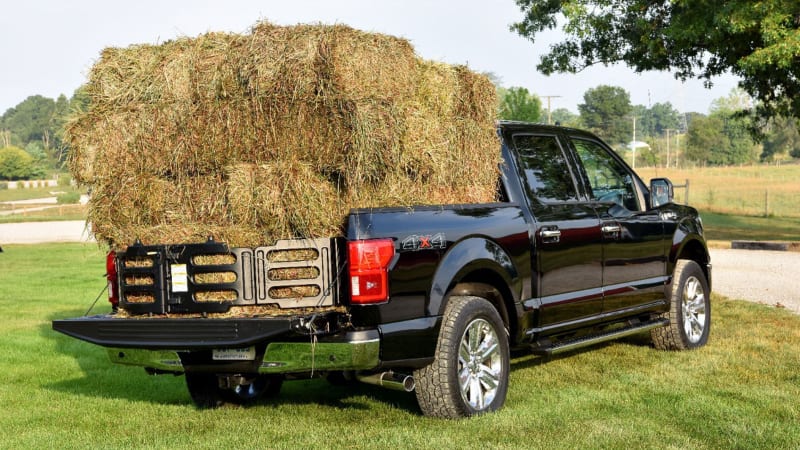 How much payload and towing capacity does the Ford F-150 have?

Use Autoblog's Smart Car Buying program powered by TrueCar to search out competitive local pricing and savings on the 2018 Ford F-150. 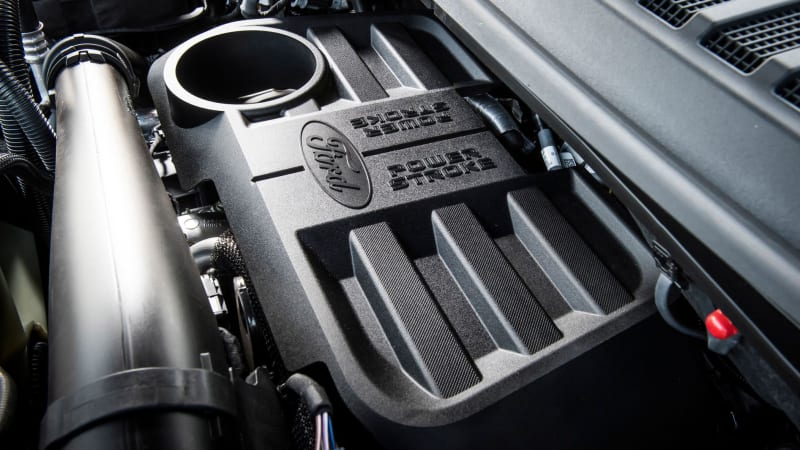 What are the Ford F-150's engines and specs?

Ford has updated the range of powertrains on the 2018 F-150. All come with automatic stop-start. In addition, a diesel version is due in spring 2018, wearing the Power Stroke name, to feature a turbocharged 3.0-liter V6 that puts out 250 horsepower and 440 pound-feet of torque. Ford's engine meets emissions requirements for all 50 states and is expected to boost fuel economy to around 30 mpg on the highway.

What kind of fuel economy does a Ford F-150 get?

Fuel-efficiency ratings will vary by model and rear- or four-wheel-drive powertrains. We'll describe the range of EPA ratings for each engine in turn:
Additionally, the EPA has rated E85 flex-fuel versions of the 3.3-liter V6, which gets 13-14 mpg in the city and 17-19 mpg on the highway, and the 5.0-liter V8, which gets 11-12 mpg city and 14-17 on the highway. Both will be available later in the year.

The EPA has not yet rated the fuel economy of the Power Stroke diesel engine. 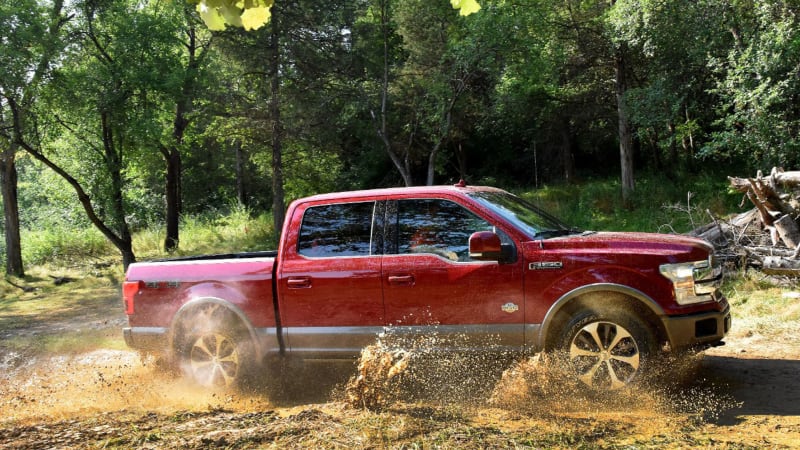 Does the Ford F-150 have a four-wheel drive option?

In his First Drive review of the 2018 F-150, Autoblog's Reese Counts writes that "The 2018 F-150 is indisputably the best and most capable truck the company has ever produced. From the base work trim to the luxurious Limited model to the hardcore Raptor, there's an F-150 for each and every potential buyer."