Aviator’s rear-drive platform will underpin the next Explorer

NEW YORK — As we mentioned last night, underneath the new Lincoln Aviator "concept" there appears to be an independent rear suspension lifted right from the Ford Mustang parts bin. And while it's pretty cool on its face that Mustang rear-drive platform bits are being reused in the broader Ford universe, what this means for the next Explorer could be really cool.

A quick caveat: The Aviator here in New York is very close to the production version, but it's not technically a production car. It looks hand-built, with temporary exhaust and some show-car touches. The suspension underneath looks exactly like a Mustang's, but the actual production Aviator will almost certainly use beefier components with the same basic design and geometry, since the Aviator will be much heavier than the smaller Mustang. That being said, we're fairly confident that even at this early stage, the Mustang-derived suspension seen in New York is a preview of what'll be under the production Aviator.

Furthermore, Ford won't say it, but based on what we're seeing on Aviator, it's a safe bet that Ford will utilize the Aviator platform for the next Explorer. That would enable the economies of scale necessary to produce a brand new rear-drive-based SUV platform in the first place. It also means that the Explorer should be available without AWD — and given the stable of powerful EcoBoost engines, and the competent 10-speed automatic in the parts bin, a rear-drive Explorer has a shot at being a decent driver. Aviator wouldn't go rear-drive-based if driving dynamics weren't important; Explorer should inherit these priorities. 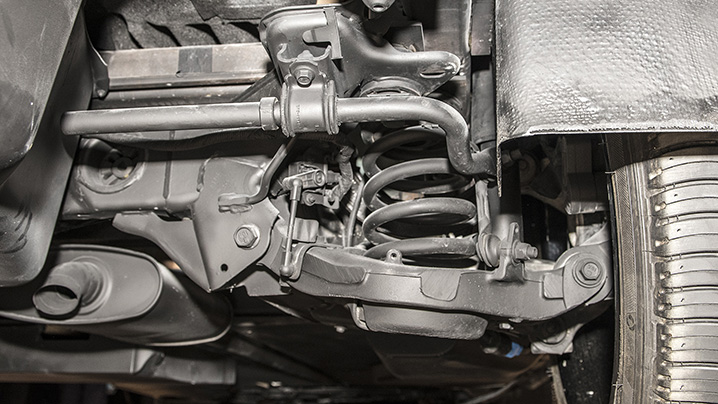 More evidence: The Explorer spy shots we saw back in February sure share the Aviator's general proportions. Even back then, before Aviator was revealed, we were hypothesizing that an EcoBoost 3.5-liter-powered version could boast as much as 400 horsepower, if the Expedition's tune were adopted. Suddenly, the Explorer seems very interesting.

So, an EcoBoost, rear-drive Explorer sure sounds like something Ford Performance would be interested in, right? We knew an Explorer ST is coming, but with 365-400 horsepower potential and a chassis designed with dynamics in mind, it doesn't seem like as much of a stretch as the Edge ST. And a performance-oriented AWD system is a possibility, too. That's an area where Ford has been gathering experience at a rapid pace.

What do we not expect from a new Explorer? A V8. If you have visions of a Coyote-powered Explorer, a sort of four-door V8 Mustang, you shouldn't hold your breath. Look at Ford's Ranger strategy: a single EcoBoost powertrain. Ford's so heavily invested in EcoBoost that putting a V8 in the Explorer, however possible, doesn't mesh with the overarching strategy. Expect a range of EcoBoost four- and six-cylinder engines, similar to what are available in the current Explorer. After all, the 2.3-liter EcoBoost engine already does longitudinally-oriented duty in the Mustang, so why not the Explorer, too?

To be clear, this is all just informed speculation based on Ford's existing strategies, what we've gleaned from the Aviator preview, and Ford Performance's recently articulated expansion of the ST line. But our confidence in a rear-drive-based Explorer is high, and an ST version is also more likely than not. This should make you excited, because anything that injects some excitement in the mainstream SUV space is exciting to us.