Trying the new Compass and other Jeeps on for size

James Riswick
If any brand has license to sell several like-sized SUVs, it's Jeep, which invented the concept in the first place. Yet, with the Cherokee, Renegade, and the redesigned 2017 Jeep Compass revealed at the LA Auto Show, just how like-sized is this trio of compact SUVs?

Well, as it turns out, that answer is more complicated than just looking at various spreadsheets of specifications. After the cover was pulled off the new Compass, I managed to explore each back-to-back-to-back to see how their back seats and cargo areas compare.

Perhaps obviously, the Renegade is the smallest of the trio no matter how you look it. Well, it actually has the most headroom, but rear legroom is cramped (a 6-footer can't sit behind another 6-footer) and it's quite obvious the cargo area is about nine cubic feet smaller with the rear seats raised. However, the Cherokee and Compass are surprisingly similar both on paper and in person – and even more surprisingly, the newer, smaller-on-the-outside Compass is actually a bit more spacious despite being nine inches shorter in overall length. When seated in back, my knees were just touching the driver seat when it was motored most of the way back to accommodate my 6-foot-3 frame. However, the Cherokee's slightly chunkier seatback meant the Compass actually had a bit more rear legroom. I then set the passenger seat to a more average distance and again, the Compass had a slight advantage. The Cherokee did have a bit more under-thigh support, however, which indicates the seat is mounted a bit higher.

But that creates a problem, as headroom is more significantly affected when the panoramic sunroof is specified. In the Cherokee, my head was into the sunroof cavity and resting against its rigid surround. In the Compass, there was just enough clearance. It should be a difference, both in terms of headroom and perceived roominess that those of average height should notice. 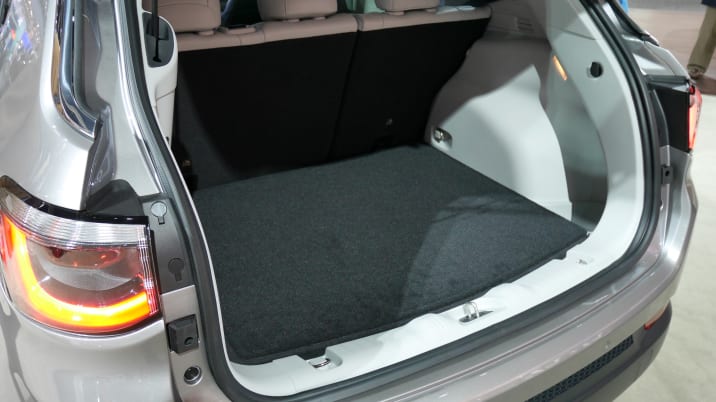 As for their cargo areas, the Compass' is larger and more useable. With the rear seats raised, it has 27.2 cubic feet versus the Cherokee's 24.6. You can scoot its sliding seat forward to nearly equal the Compass, but of course doing so reduces its rear legroom. The main reason is width. The Cherokee is noticeably narrow and it gets worse when equipped with the optional subwoofer. In terms of maximum cargo volume with the rear seats lowered, the Compass has 59.8 cubic feet to the Cherokee's 54.9. It should be noted that neither holds a candle to the Honda CR-V's and Toyota RAV4's of the world.

So, just because the Cherokee is the bigger SUV on the outside doesn't mean the same is true on the inside. That leaves its available V6 engine and Active Drive II 4x4 system, higher ground clearance and perhaps greater refinement as reasons you might prefer it, but with the 2017 Compass and its many improvements, the differences between these two SUVs -- and the reasons to buy one instead of another – are harder than ever to identify. 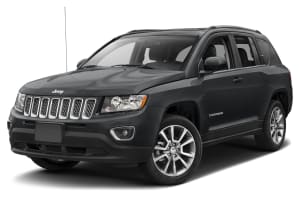