Here's what the Bullitt adds to the Mustang GT. Ford announced the return of the Bullitt Mustang at the Detroit Auto Show, and it was a hit. It even ended up as one of our favorite cars from the show. A big part of that has to do with the beautiful, subtle, throwback looks to Steve McQueen's 1968 Mustang GT from the "Bullitt" movie. But the 2018 Bullitt Mustang adds more than just extra style. To see how much it adds, we've broken down key differences and similarities between the 2018 Bullitt Mustang and the most feature-packed modern Mustang that it's based on, the Mustang GT Premium trim, in the chart below. It's followed by a more in-depth analysis. 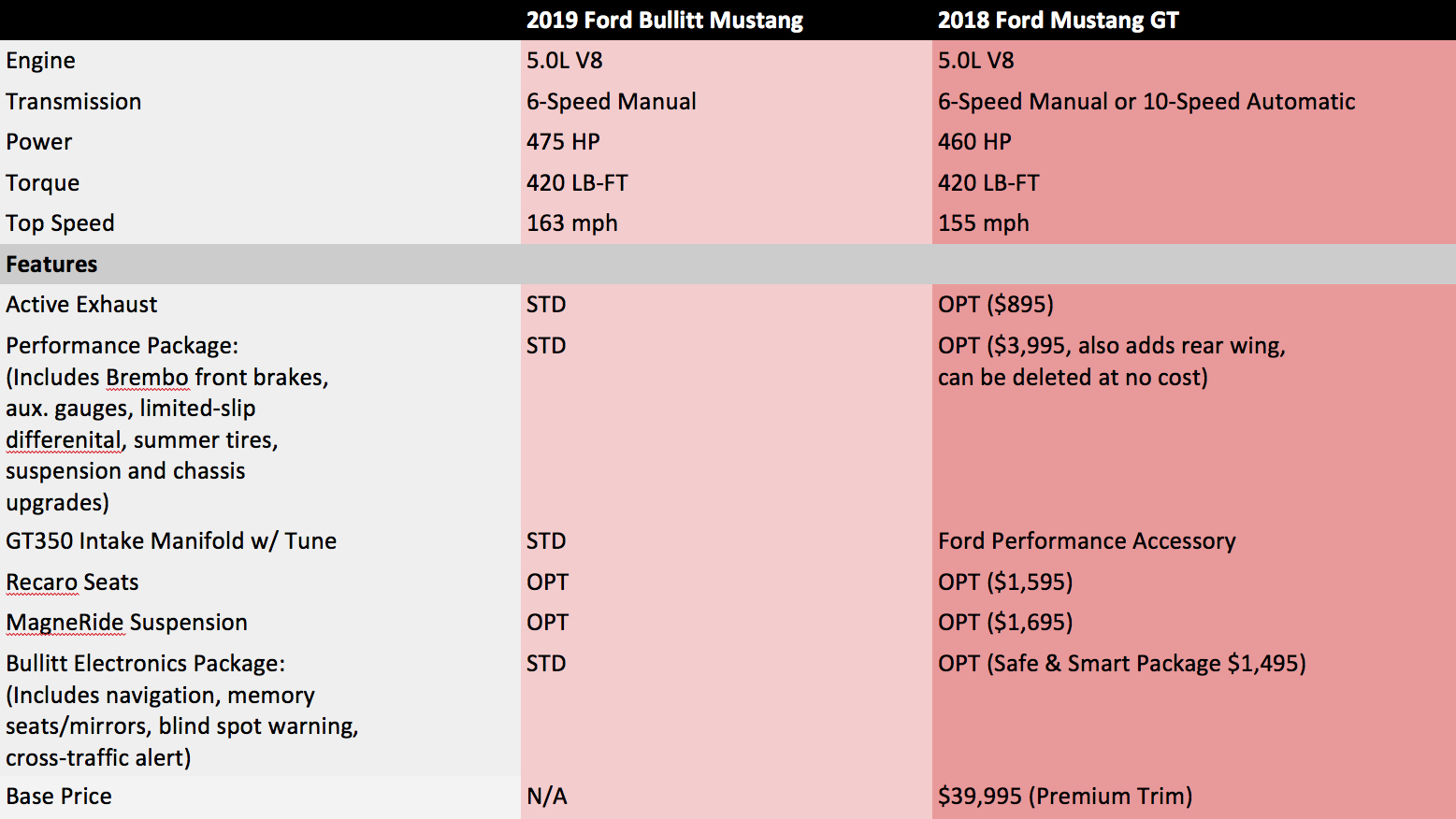 The most notable area in which the Bullitt Mustang differs from the Mustang GT is in performance. Ford has said it will make at least 15 more horsepower than the regular one for 475 total, though torque remains unchanged at 420 pound-feet. This power gain is due to an intake package that includes the Shelby GT350 intake manifold, 87-mm throttle body and engine tune. These parts are currently available as an extra cost package through Ford Performance for the 2014 to 2017 Mustang models, but at the moment, there doesn't appear to be a package for the 2018 model. On those older Mustangs, the package, called the Power Pack 3, increases power from 435 horsepower to 472, and torque from 400 pound-feet to 405. That package also costs $2,469.

Besides offering more power, the Bullitt gets a higher top speed than the Mustang GT, hitting 163 mph instead of 155. The Bullitt is only available for those who can work a clutch pedal, since it's only available with a six-speed manual. Regular Mustang GTs offer a 10-speed automatic as an option, which also includes a "Drag Mode" that can launch the car to 60 mph in under 4 seconds. No 0-60 time for the Bullitt has been provided yet. Finally, the Bullitt includes the Performance Package, which is a nearly $4,000 option on a Mustang GT. That package adds Brembo 6-piston front brake calipers with bigger rotors, oil pressure and vacuum gauges, a limited-slip differential with a shorter gear ratio, stiffer springs, various braces, summer tires and a thicker rear anti-roll bar.

Since the Bullitt Mustang is based on the Mustang GT Premium, they both share upgrades to their lower-trim brethren. These include leather heated and cooled seats, heated mirrors, different drive modes, automatic climate control, nine-speaker sound system, and SYNC 3. The last of those recently gained additional Waze functionality. The Bullitt then picks up some additional features that are optional on a Mustang GT Premium. As already mentioned, it features the Performance Package, but it also has something called the Bullitt Electronics Package. This comes with navigation, memory seats and mirrors, blind spot warning and cross-traffic alert. These features all are available on a GT Premium in the Safe and Smart Package that costs $1,495. The Bullitt also gets an active exhaust as a standard feature. To get one on the Premium GT, you'll have to shell out $895. Both still have options, though. Each can have Recaro seats added and the magnetic suspension. On the Mustang GT, the seats cost $1,595, and the suspension costs $1,695. Another note on the Bullitt's Recaro seats, the Recaro logo is stitched in a green thread to match the Dark Highland Green exterior.

Ford hasn't released pricing for the Bullitt Mustang or its options. A Mustang GT Premium starts at $39,995. For a comparably equipped GT Premium, before the intake upgrades, has a retail price of $46,380. It wouldn't be surprising if the Bullitt Mustang costs at least that much, if not a bit more for its unique colors, badging and wheels as well as the upgraded intake tract.

Speaking of colors and such, these are easily the most distinguishing features of the Bullitt Mustang, and will surely be the deciding factor for many purchases. It gets a unique badge-less black grille with a thin chrome surround, a Bullitt badge on the tail in place of the GT badge and black five-spoke wheels with silver rims. It's also only available in Dark Highland Green, similar to the movie car, or Shadow Black. These unique body parts and the Dark Highland Green paint are not available on the Mustang GT. However, the Mustang GT can be had in Shadow Black along with 10 other colors. There are also a few interior colors, and, if you're willing to do without the Performance Package, different wheels are available.