Brighton, U.K. - Don't let the badge fool you – the new compact Jaguar crossover is very much gasoline-fuelled. Confusion over the name clearly fooled a few launch attendees though, pre-drive discussion focused on whether it would have sufficient battery endurance to get us the 60 miles to lunch in Brighton, an iconic seaside resort on England's southern coast. Such are the priorities of jet-lagged roadtesters, the relief palpable when it was realised good ol' internal combustion power means a range of over 400 miles by the quoted EPA combined figure. And our fish 'n' chips wouldn't be going cold.

The fully-electric I-Pace will join the crossover line-up eventually, but for now the E-Pace is a more conventional junior partner to the F-Pace, the fastest selling vehicle Jaguar has ever built. Why wouldn't it want to capitalise on that with a smaller, more affordable but equally stylish second model line? With a $38,600 starting price it's nearly $3,500 cheaper than the equivalent entry points to the F-Pace and Evoque ranges but, as we'll see, with a character of its own.

If the E-Pace looks like a slightly truncated F-Pace with some sharper body detailing and a sportier face, then little wonder. The basic lines are familiar but it's 13.3 inches shorter overall and 7.6 inches less in wheelbase. It looks taller as a result but is more or less identical to the F-Pace in height, with harder edges, reverse cuts in the flanks that catch the light, and a slinky trunk lid helping make it look lower and wider than it actually is. 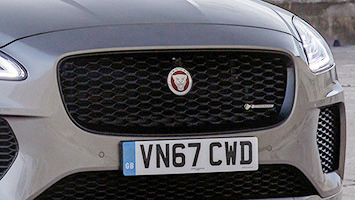 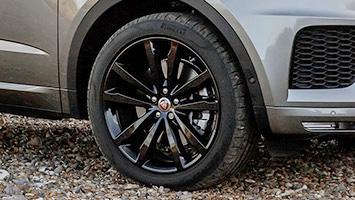 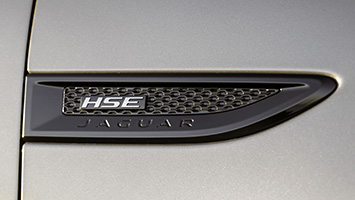 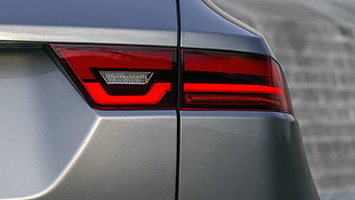 The major difference under the skin is the E-Pace's transverse engine layout, the basic foundations shared with the Evoque and distantly related to Ford's EUCD platform. This is a Washington's axe situation, though, as the fundamental layout and center floorpan are similar to the Evoque's, but the front subframe and rear suspension all new.

The powertrain is more closely related, being based on Jaguar Land Rover's 2.0-litre Ingenium turbocharged gasoline engine and driving all four wheels through a nine-speed automatic transmission. There are two power options – 246 horsepower for the standard car and 296 hp for the R-Dynamic models. Also used on the Evoque, the Active Driveline system on R-Dynamic models is based around GKN's Twinster rear-axle unit, with full torque vectoring across the rear axle when engaged. And if this is suddenly ringing bells that's because, yes, it's the same hardware corrupted by Ford to turn the Focus RS into an oversteering, Drift Mode enhanced hoonigan.

Unlike Ford, Jaguar doesn't overspeed the rear axle to contrive that oversteering balance, though it was apparently considered early in development. Durability concerns and the fact that soccer moms are probably more interested in all-weather traction than going full Ken Block put paid to that idea, but the power advantage over close rivals like the 228 hp BMW X1 xDrive28i and 208 hp Mercedes GLA250 mean Jaguar has the sportiest option in its class. 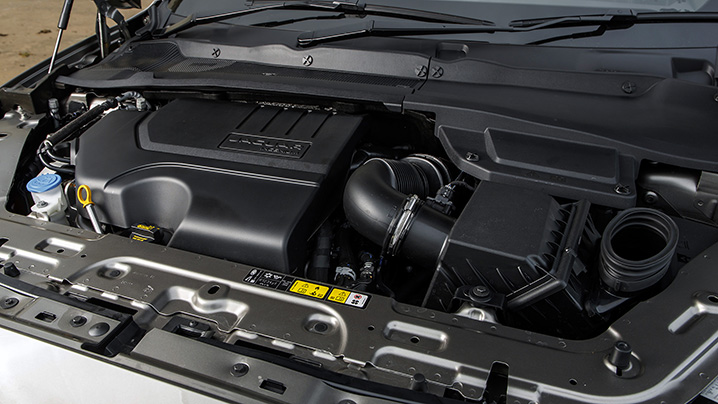 The E-Pace's power makes itself felt in the first few miles of the test route. Jaguar could have played home advantage and routed us onto suitably smooth and flattering roads. Instead we're straight onto the bumpy, concrete-surfaced orbital expressway that surrounds London before heading off along tight and twisty English lanes whose occasionally haphazard pavement is covered with a slippery carpet of wet leaves.

Our test car is the more powerful model, more or less equivalent to the $53,100 MSRP R-Dynamic HSE topping Stateside pricelists. For a limited period there's also a $53,550 First Edition model with unique Caldera Red paint and 20-inch wheels using the 246-hp motor. Jaguar has always loved big wheels, and the 20s on this car look good but the thin sidewalls can't blunt the intrusion of expansion joints and potholes. Constantly variable dampers as part of the Active Dynamics package will be available in due course but our test cars have passive struts, so below 30 mph the E-Pace shows a brittle side.

As the speeds increase this diminishes and the brand's trademark body control comes to the fore. The Integral Link rear suspension is key here, variations of this set-up used across the Jaguar and Land Rover ranges and designed to both improve wheel control and packaging, with less intrusion to trunk space than the Evoque's setup. In the Jaguar style, the E-Pace feels as composed and stable in the middle of its damper stroke as it does when settled, this flowing character helped by well-weighted and positive steering. 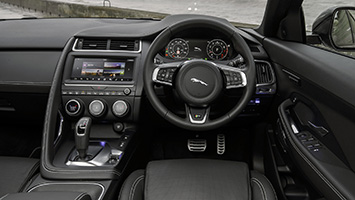 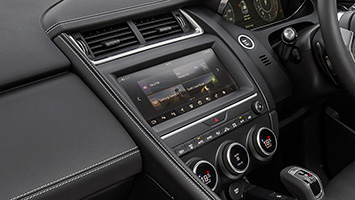 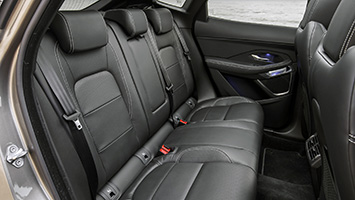 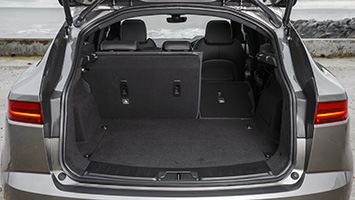 While it sounds a little rough and unrefined at lower speeds the engine pulls hard, delivering peak torque from just 1,500 rpm and exploiting its strong mid-range through all nine gears. Aggressive throttle inputs can have it howling like a CVT, especially in the sportier Dynamic mode, but generally the transmission is smooth and unobtrusive. Our test car didn't have the shift paddles coming on customer R-Dynamic models, but purists will like the selector's 'correct' alignment of back for upshifts and forward for down if you're using the manual mode.

Stated aims for the interior design include a low-slung seat position and tall beltline to contrive a sense of sitting in a low-slung car – despite being in a tall-riding crossover. Go figure, but the F-Type style passenger grab handle and driver-oriented dash help contrive a sporting atmosphere, and the combination of a standard 10-inch Touch Pro screen for infotainment and large, tactile rotary controls for heating and ventilation work well. The optional multi-configurable 12.3-inch TFT Interactive Driver Display and next-gen full color HUD demonstrate JLR has got its act together with the tech too.

And even on slippery roads, the handling balance is true to the dynamic promise. Sure, you're still in a tall, nose-heavy crossover, but the front axle has bite. On this Active Driveline-equipped car there's a rear-driven sense of being pushed into the turns that contrasts with that of being hauled out by the Haldex-style systems in most rivals. It's safe and secure in these conditions as you'd hope of a family oriented crossover. But with enough sparkle to make it fun when you're on your own.

The development team may have nicknamed the E-Pace 'the cub' and hidden cutesy motifs to this effect around the car. Its position in the range and supporting role to the F-Pace is clear enough but, baby or not, Jaguar has given its little crossover claws of its own.