The British SUV that thinks it's a sport sedan. We know what you're thinking, and we tend to agree: The world probably doesn't need another crossover. But premium European automakers keep building them because people keep buying them. Before we even got behind the wheel of the 2017 F-Pace, we knew that it would be Jaguar's best-selling model by year's end. Now that we've driven the brand's first crossover, it's apparent that there is more to the F-Pace than future sales success. This is a real Jaguar.

It would have been easy for Jaguar to borrow a platform from corporate sibling Land Rover. Instead, Jaguar's engineers decided to chart their own course, starting with the aluminum underpinnings of the XE sedan. As it turns out, that was a brilliant decision. The F-Pace looks and drives like a proper Jaguar, but it has some surprises hiding under its shapely sheetmetal that make it the most practical vehicle the brand has ever offered. 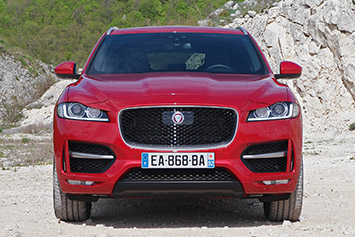 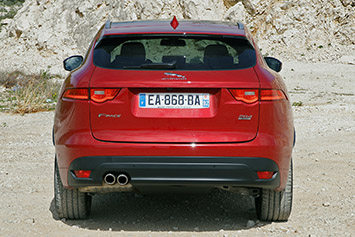 The F-Pace sports a familiar face, with a voluminous chrome-ringed grille flanked by twin air intakes that are almost as large. Long horizontal headlamps flow into the fenders, and just behind the front wheels sit additional vents that are the only extraneous bit of styling flair on the entire vehicle. The overall look is smooth and taut, with lots of surface tension along the car's bodysides.

Not that Jaguar would have done it, but we're glad this is not an overwrought Lexus RX clone. The F-Pace's proportions emphasize the chassis' rear-drive roots, although Jaguar will only sell the crossover with all-wheel drive in the US. By default, 90 percent of engine torque is routed to the rear wheels, and that can drop to as little as 10 percent as dictated by available traction.

While the good old KISS acronym applies to the car's styling, it applies equally well to the driving dynamics with one slight modification: keep it sporty, stupid. A rigid aluminum chassis – it would be all-aluminum if the rear floor weren't steel to ensure proper 50/50 weight distribution – is derived from the same architecture as the XE sedan, rejiggered to sit higher off the ground and allow for greater suspension travel. As you'd expect, the F-Pace drives a heck of a lot like a sport sedan, only giving up the illusion if you notice how high you're sitting from the road. 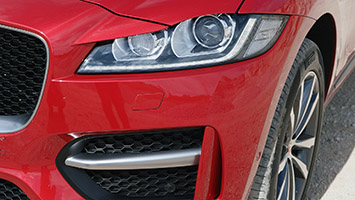 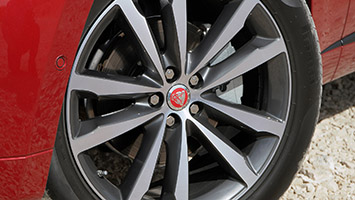 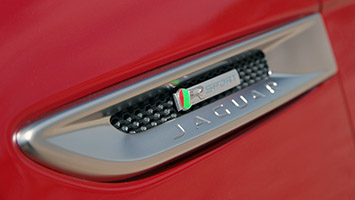 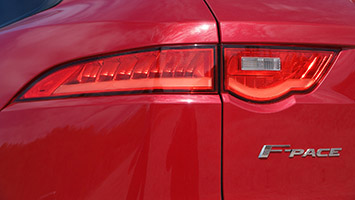 Jaguar has nailed the driving dynamics of the F-Pace. Steering is linear and, in Dynamic mode, perfectly damped. The ride on models equipped with adaptive suspension is firm and controlled, even with massive 22-inch wheels fitted. Eighteen- and 20-inch wheels come standard on the lower grades, and only the first 275 First Edition models will come with the Pirelli P Zero tires our test cars wore. Still, all-season rubber isn't likely to stamp out the F-Pace's delightfully frisky behavior.

We kicked off our F-Pace experience in the top-rung, 380-hp S in Caesium Blue First Edition trim. The limited-edition treatment has a houndstooth pattern embossed in the leather and printed in the door panel trim, plus just about every option available for the crossover. Dynamically, it's identical to other S models, and it's definitely not lacking for power. The run to 60 miles per hour clocks in at just 5.1 seconds, and the engine is still pulling hard well into triple-digit speeds. Like most Jaguars, the F-Pace S sounds downright wicked with the throttle pinned. There's very little supercharger whine inside the cabin, and none of the popping and sputtering antics of an F-Type with this engine. Instead, the exhaust note is smooth and refined, though always audible.

Although the four-cylinder diesel only offers up 180 horsepower, it counters with 318 pound-feet of torque from 1,750 through 2,500 rpm. That's not much less than the 332 lb-ft of the supercharged V6. A mash on the accelerator pedal doesn't bring an instant rush of power from the small diesel, but once underway the single variable-geometry turbocharger spools up nicely and delivers a satisfying mid-range shove. Zero-to-60 sprints happen in a reasonable 8.2 seconds. Don't expect to hear any soul-stirring music from the oil-burner, and do expect to feel some low-resonance vibration through the floor and interior touch points at around-town speeds. 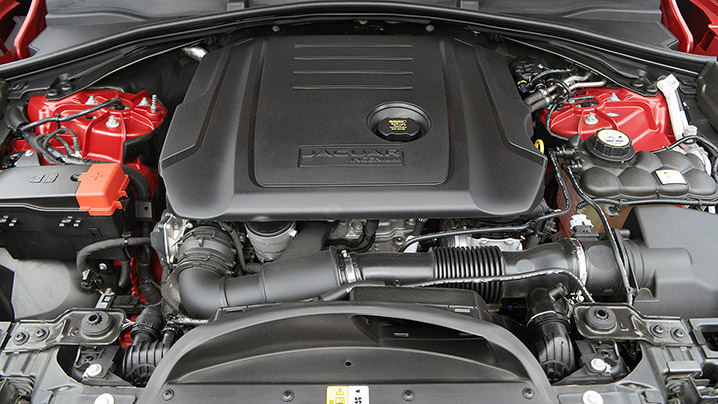 A 340-hp version of the supercharged 3.0-liter, dubbed 35t, is expected to be the volume engine in the States. We weren't able to sample it during this drive, but on paper it's only a couple of ticks slower to 60 than the 380-horse version. The engine is also offered in this tune in other newer Jaguars where we've found it just about as satisfying as the S version.

An eight-speed ZF automatic is the only transmission available, which is just as well. It works perfectly, and in S mode holds gears and fires off shifts exactly as we want. There are shift paddles, but we didn't find much need for them. Our only real complaint with the car's behavior is that throttle response is a bit too abrupt in Dynamic mode and with the transmission in Sport, tossing heads in ways the car's well-sorted suspension doesn't.

Think of the 2017 F-Pace as a Jaguar for all roads and you'll be on the right track. When the surface gets really cruddy, you'll want to dial back from Dynamic and into normal mode, which tones down the firmness and mellows out the ride. Dive into the menus of the infotainment system, and you can opt for Dynamic steering while letting the softer suspension soak up the imperfections. 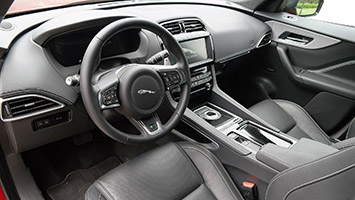 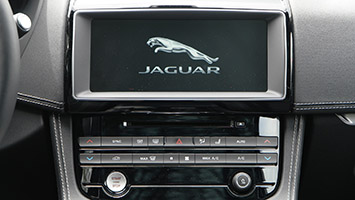 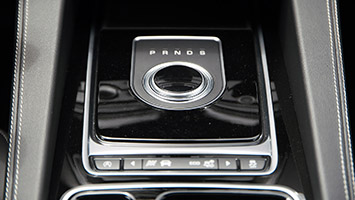 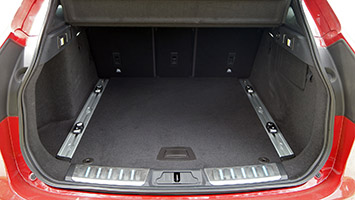 When the going gets truly tough – as in the road disappears and is replaced by dirt, mud, rocks, or gravel – the F-Pace is still surprisingly capable. It's no Land Rover, but why would it be? The Jaguar crossover was designed solely as an on-road vehicle, according to designer Wayne Burgess, but once it was completed the engineers found out it performed much better than expected in off-road settings. In addition to all-wheel drive, electronic goodies like Adaptive Surface Response and All Surface Progress Control – cruise control for the dirt, basically – keep even the greenest off-road drivers well within the limits of the car's capabilities.

The F-Pace isn't just the most confident Jaguar on rough surfaces, it's also the most practical in everyday life. There's a useful 33.5 cubic feet of cargo space behind the rear seats and, just as important, enough room in the second row for two life-size adults. That gives Jaguar a real advantage over the Porsche Macan, which offers just under 18 cubes in the cargo area and has a rear seat that's better for containing shopping bags than schlepping friends.

A big panoramic sunroof helps the F-Pace's cabin feel airy and welcoming. That's good, since the interior styling is the weakest point of the package. There's nothing particularly eye-catching inside, excepting perhaps Jaguar's latest InControl Touch Pro infotainment system. When so equipped, there's a 10-inch LCD atop the center stack in addition to a 12-inch digital cluster in place of traditional gauges. Apple CarPlay and Android Auto support are promised soon. 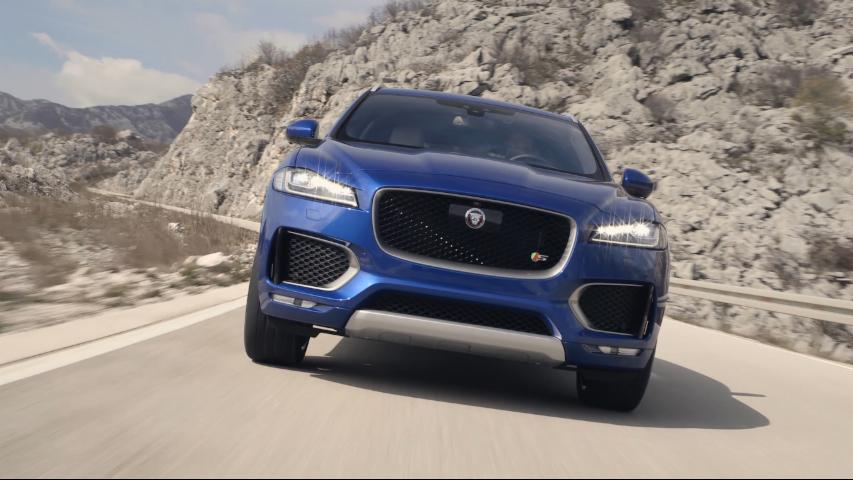 Jaguar expects buyers to cross-shop the Audi Q5, BMW X3 and X4, Mercedes GLC, and Porsche Macan. Throw in some potential Lexus NX and Volvo XC60 conquests, and you're looking at huge potential for Jaguar to sell lots of crossovers. Interestingly, the diesel is packaged as the base engine, with prices starting at $41,985. Stepping up to the 35t brings a base price of $43,385, while top-level F-Pace S models cost at least $57,695. Those prices put the F-Pace dead center in its target market, splitting the difference between the X3 and X4, closely mimicking the Q5, and coming in well below the Macan. 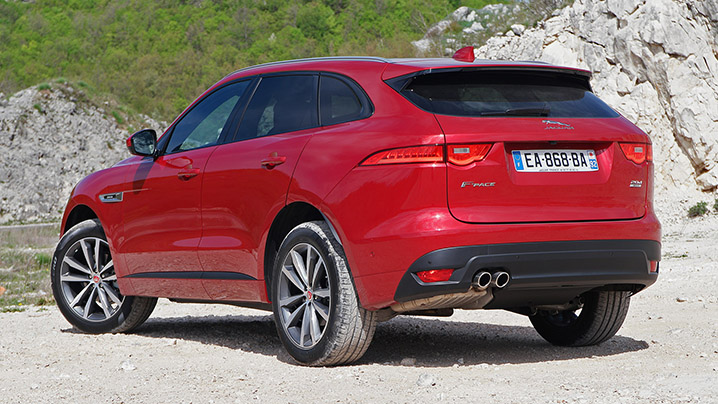 We'll need some back-to-back time in the F-Pace and its primary competitors – particularly the BMW and Porsche offerings – to know if the Jag is the best of the bunch or just one of the best. Either way, it's extremely compelling, and it fully deserves its future spot atop Jaguar's sales charts. In the end, then, you were wrong. The world really did need another crossover. 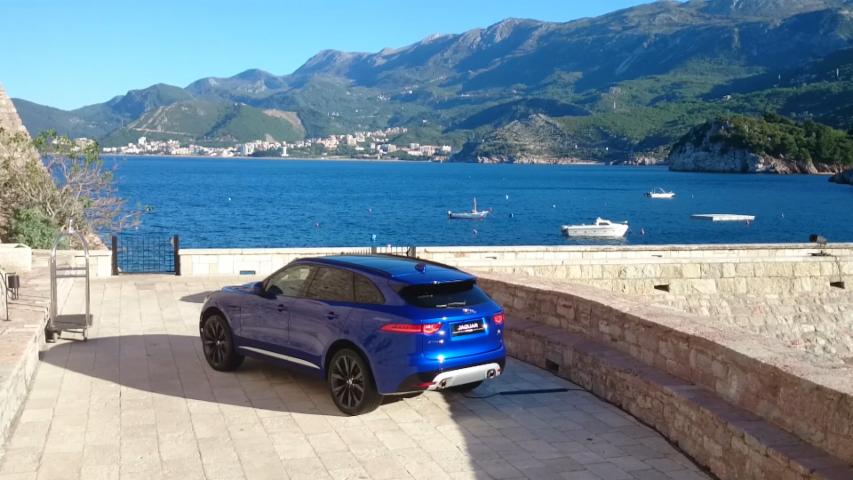