This one is loaded with Ford Performance parts.

View All Specs
It seems all the stops were pulled when developing the Ford Shelby GT350. Everything, from the engine to the suspension to the car's styling, looks and feels the part. Yes, it's a Mustang, but it doesn't just feel like a Mustang with more power. It's more than the sum of its parts. And this particular car has a number of extras (some good, some a little unnecessary) from Ford Performance. The best part is all of these parts are covered for 3 years or 36,000 miles.
Senior Producer Christopher McGraw: "Look what color it is," Reese — our associate editor and vehicle manager extraordinaire — said as he handed me the familiar bulbous key fob adorned with a Cobra. I looked down at the tag.

The Ford Shelby Mustang GT350 has always been one of my favorite cars. Growing up, I had a model of a 1965 GT350 sitting on my shelf. The same model now sits on my desk at work. This is the fourth GT350 that I have had the pleasure of driving, and what makes this one different are the added Ford Performance parts.

There's not a whole lot to say. This car is about as perfect as you can get at this price point. The Ford Performance shifter improves it, but only slightly. Personally, I'd lose the windshield decal and Ford Performance emblems on the side, and instead opt for the regular GT350 variants. The only gripe I can muster is that it doesn't play well on wet pavement, but that's hardly surprising. It sounds great in sport exhaust mode, though it was nice to be able to toggle that on and off while pulling out of my driveway at 6:30 in the morning. Nice for the neighbors at least.

It's good to listen to, great to look at and even better to drive.

Associate Editor Reese Counts: At the heart of the GT350 is what I believe to be one of the best engines any automaker has ever produced. This eight-cylinder ode to joy packs everything I love about naturally aspirated engines into a 5.2-liter package. Power comes on smoothly, kicking and screaming all the way to the 8,250 rpm redline. The flat-plane crank helps the revs crest and fall as quickly as the lines on a heart-rate monitor. Then there's the sound. It's a mix of deep, hairy-chested American muscle with a heaping dose of Italian seasoning. It's a wholly unique thing.

The car isn't perfect. Visibility is limited, especially at night. On the highway, the tires like to catch the grooves. It was a little unnerving, especially in the rain. It doesn't help that the steering is a little dead on center. It never felt out of control, just not as buttoned down as a lot of other cars.

Still, I love this car. It's beautiful, though Grabber Blue isn't my thing. All of the Ford Performance parts really do make this car better. Unlike a lot of setups, the suspension doesn't really affect ride quality. The lowering springs did make it look pretty mean. If it was my money, I'd ditch the exhaust and all the dumb graphics and stick with the short-throw shifter, suspension and oil separator. Hopefully prices settle down a bit, because I'd really like to find one of these in a few years.


Consumer Editor Jeremy Korzeniewski: As much as I understand the need for alternative powertrains in these days of rampant fuel over-use and carbon emission woes, I still love the sound of internal combustion. And there may not be a better example of the breed than the Ford Mustang Shelby GT350. Especially when you flick the console-mounted switch to open up the free-flowing exhaust.

Not only is the aural experience just about perfect, so is the engine. The V8's flat-plane crank design lends itself to high-rpm blasts, and while I didn't get a chance to drive the GT350 on a race track, even accelerating down Woodward Avenue (in first and second gears only, of course) is a blast. We probably don't have many more years of big, naturally aspirated V8 engines to enjoy; the GT350's is not to be missed.

Senior Editor, Green, John Beltz Snyder: It's been sort of a rainy week here in Southeast Michigan, so my drive home in the Shelby GT350 was a bit squirrelly. Over the years, I've known a few cars that'll bite your head off if you look at them sideways, and a good chunk of those were Mustang variants. So getting in the Shelby to head into heavy highway traffic in the wet was only made more fraught by firing up the car to hear the roar of the 5.2-liter V-8. Of course, I hit the toggle to switch the exhaust to Sport (read: loud as all heck) mode. Needless to say, my senses were tingling as I made my way home, wipers slapping the rain off the windshield.

This morning, though, the roads were dry, and the Shelby was much more compliant. I was able to lay into the throttle from low speeds and feel the fast but linear tug of the engine as the sound of the exhaust drowned out every other noise in the world. This car has a lot of power, but in the right conditions, it feels entirely manageable, and much easier to take full advantage of. The tiny, clicky throws of the manual shifter only make it more enjoyable, and every gear swap felt buttery smooth as I let off the clutch and got back onto the throttle. I went from thinking, "How could anyone manage to get this thing safely around a track?" to saying to myself, "I need to flog this thing on a track."


This gauge in the @Ford Shelby GT350 is one I haven't seen in a car before. @therealautoblog pic.twitter.com/j7lFFm9Jod 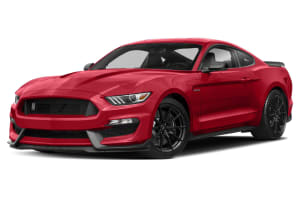