Seyth Miersma
View All Specs
Red meat. America's signature protein has necessarily violent origins. Slaughter, butcher, open flames and iron – you don't need a recently lapsed vegetarian (me) to lay it out for you. Of course the blood and the cuts are all part of the appeal, a reminder with every forkful of beef that we still like to be visceral creatures in an increasingly sanitized world.

There is much in the makeup of Ford's Mustang that matches these carnivorous tendencies. Not only does it offer a hint of violence with potential for speed every time the engine kicks over, it's also the motive meal we Americans salivate over more than any other. Ford's pony car is among the most popular car searches online, year in and year out, and truly special versions stress servers and storm forum spaces when they hit the streets.

I'll be honest, I've been just as frothed and drooling to see and drive the 2016 Ford Shelby GT350 as the rest of you netziens, too. Engineers have hacked and carved away at the stock car, to make a wicked V8 morsel that's bloody-minded and racetrack ready. 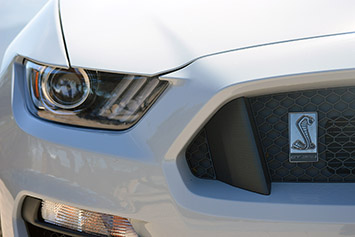 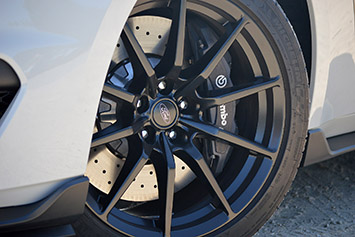 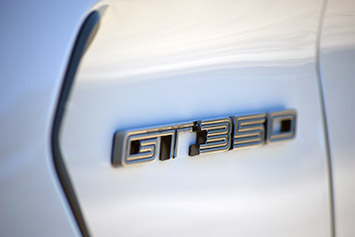 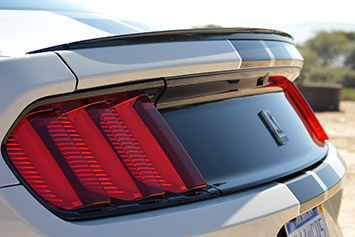 The flat-plane crank V8 revs to the moon and sounds like a supercar when spinning hard.

The palpitating heart of newest Shelby is a 5.2-liter, naturally aspirated V8 engine that bucks the current, popular trends for performance cars, while also breaking new ground for Ford. Fast cars from all over the world have made impressive numbers using turbos and superchargers in recent years, but Ford wanted revs to make its racing machine go right. So the company tossed out the forced-induction formula, and created a flat-plane crank V8 that revs to the moon and sounds like a supercar when spinning hard.

The light, strong crankshaft reduces inertial mass in the engine and allows for a mind-blowing redline at 8,250 rpm. Perhaps more importantly it makes for beautiful rising wave of available torque as one digs deeper into the throttle, which feels like fast magic when doing something like climbing the hill to The Corkscrew at Mazda Raceway Laguna Seca. At 526 horsepower and 429 pound-feet of torque, some 102-hp per liter, there's enough power for staggering acceleration whenever you ask for it. Providing, of course, you keep the pot boiling at three grand or more. To call the power delivery below that mark "weak" would be ludicrous, but it does feel more inert there than the cars in the turbo-quick jet set that's so popular these days.

And, as I said, the wonderful noises the car makes are worth the price of a little low-end torque. A dual-mode exhaust lets you run quiet if you're driving easy, but I can't recommend either. I drove from Laguna Seca to Big Sur, and the sound of that Italian-accented American voice was never better than when banging off cliff sides and echoing out over the ocean. 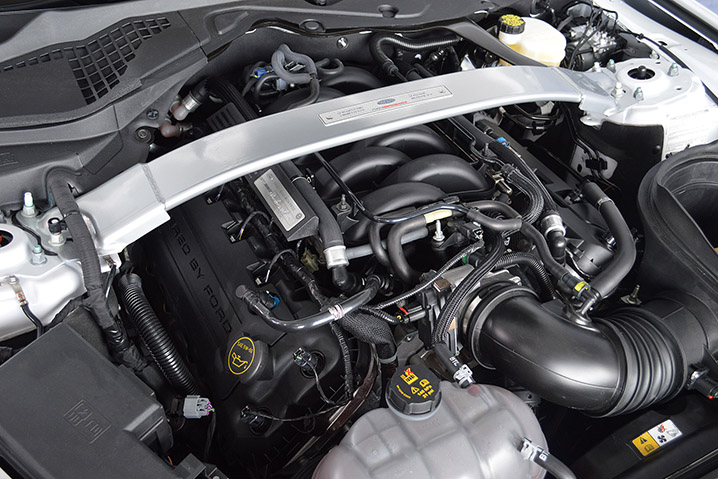 The pinned-down feeling on the public roads turned to "stuck to the Earth" at track speeds.

Ford mated its new halo engine to a six-speed manual transmission from Tremec that, frankly, sets a high-water mark for muscle car shifters. A medium-weight clutch and short-throw lever allowed me to move briskly up the ladder, and downshifts were snappy, too. Even on the track, banging from third to second to set up for Turn 11's right angle, the box worked smoothly. Considering I've had the misfortune of using several disagreeable Mustang manuals in the past, this felt like a major step forward.

The first-ever MagneRide dampers on a Mustang fall into that quantum leap category, as well. Even riding on rubber-band tires and 19-inch wheels, I found ride quality on the street drive to be completely acceptable. You might not love daily driving the GT350 on Snow Belt roads, but the most conforming suspension mode ("Normal") wasn't harsh on Cali's coast. Sport and Track modes up the stiffness at the corners, and the flatness with which I was able to dispatch them. The pinned-down feeling on the public roads turned to "stuck to the Earth" at track speeds, the chassis doing good work in keeping my contact patch fat and my ego growing.

Now, I'd hoped that Ford would have allotted enough time for me to drive both the standard GT350 and its even-more-focused GT350R counterpart equally. Sadly, that wasn't the case. I didn't get the R on the road drive at all, and the one-session I had on the track was simply a tartare appetizer to the lesser car's steak dinner. But it was enough of a taste to tell you, definitively: These tires are mind-blowing. Ford worked with Michelin to develop a set of Pilot Sport Cup 2 tires (riding on the incredible carbon-fiber wheels) that are as maniacally sticky as any I've sampled. Forget for a second they're fitted to a sub-$100,000 vehicle; this rubber would be at home on any supercar worth half a million. And even though I only had four laps to try (come on, Ford!), I couldn't begin to get the rubber to give up on any high-g section of Laguna's swooping course. Naturally, it's a moral imperative that we get the GT350R on track and angry with Chevy's Z/28 Camaro – there can be only one. 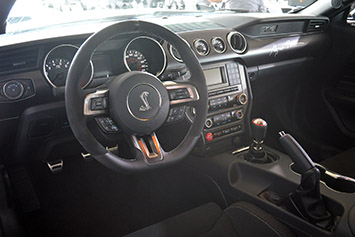 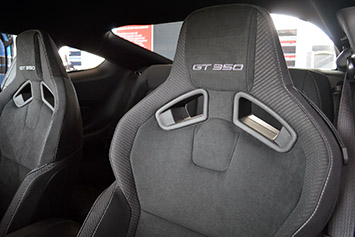 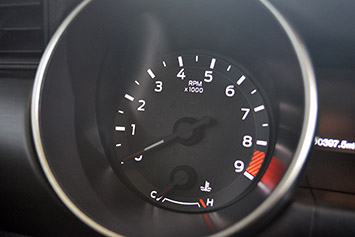 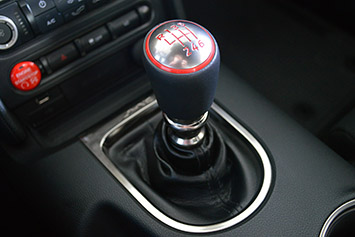 Ford worked with Michelin to develop a set of Pilot Sport Cup 2 tires that are as maniacally sticky as any I've sampled.

The sticker rubber also delivered a lot more tire information to the steering wheel. The R offered a good sense of grip via my fingertips, at least on the track. But during street driving, I found the GT350 to be a bit wooly in terms of steering feel. Still, the electronic rack offered three effort levels; I found the heaviest Sport setting to be the most appropriate for the car, and the best matched to the very quick bite at turn-in.

I won't insult you by making a judgement on the Shelby's styling – your eyes and mine work equally well, presumably, though our taste in coupe design might have nothing in common. I will say that, for one, I didn't hear a man-jack among my fellow journalists saying anything bad about the aggressive look. What's more, Ford has really just confidently updated the visual vibe of the Mustang we've already come to know.

The GT350 will first come in two optional flavors – a Track Package and a Technology Package. The tech car has the smallest rear spoiler, a much more livable suite of infotainment inside, and non-Recaro seats that are softer, less supportive, and better for daily driving than the race buckets. The track-pack car has a much more spartan interior with a poverty spec (these days) head unit, and seats starchy enough to keep even my big Dutch ass firmly planted in a corner. It also has a taller rear spoiler, which makes it easier to pick out of a crowd. (Oh, and for those wondering, our photos show a tech-pack exterior with a track-pack interior, as I ended up photographing multiple vehicles. Buy me a beer someday and I'll tell you why.)

The GT350 is the rare-steak sporting machine that delightfully feeds our fastest dreams.

In basic configuration, the GT350 is a rather screaming good deal, too. The base price is $48,695 when you've added on the $900 destination charge, which might seem like a lot for a Mustang, but not very much for a BMW M4-level performance car. My guess is you'll see a lot of Shelby's optioned up in the mid fifties, with the big options packs adding lots of content but for thousands more ($7,500 for the tech pack and $6,500 for the track pack, for instance). The GT350R runs a stiffer $62,195, but that still undercuts that Z/28 by about ten grand, and it has carbon fiber wheels. I know, I know... I'm a nerd.

A month ago, my fellow editor Greg Migliore got a ride along in the Shelby in Western Michigan. Now, it's important to note that, among Greg's many fine qualities, his prescient sense for finding free food is perhaps the most astonishing. I once looked up from a plate of lukewarm auto show pasta mush to see Migliore holding a plate of fresh sushi and a glass of scotch, telling me that I'd just missed out on the Lexus lunch. True story (mostly). So, when I read that he'd passed on a big spread of BBQ to fit in a few more right-seat laps in the Shelby, I knew the car would be damn good. As it turns out, Greg and I were both right.

The GT350 is the rare-steak sporting machine that delightfully feeds our fastest dreams. The hot, bloody bite that makes any normal, safe, and friendly car so bland by comparison. Bon appetit. 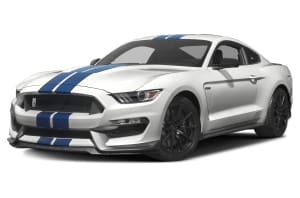