It looks to be the same green as previous cars.

Reese Counts
Update: Ford contacted Autoblog saying that it did not create this window sticker.

The 2018 Ford Mustang hasn't even hit showrooms, but there's already rumors and leaks suggesting new variants of the refreshed car. Today, Mustang6G.com released a small image of a window sticker for a new Bullitt Mustang. While it does look like a real Ford window sticker, it's difficult to say for certain if it's real. Still, this isn't the first leak pointing toward a Bullitt Mustang, but it is the most detailed.

Earlier this year, a Ford video starring Dwayne Johnson had a few interesting cars in the backdrop, including a Boss 302 and a sketch of a Mustang painted in a green similar to past Bullitt models. This new window sticker lists "Highland Green Metallic" as the color, similar to the "Dark Highland Green" used on past cars. This seems to match the color of the car in the backdrop of the Ford video. Zooming in on the image shows that the car is equipped with the Coyote 5.0L V8 and a the new 10-speed automatic. Expect a manual to be available as well. 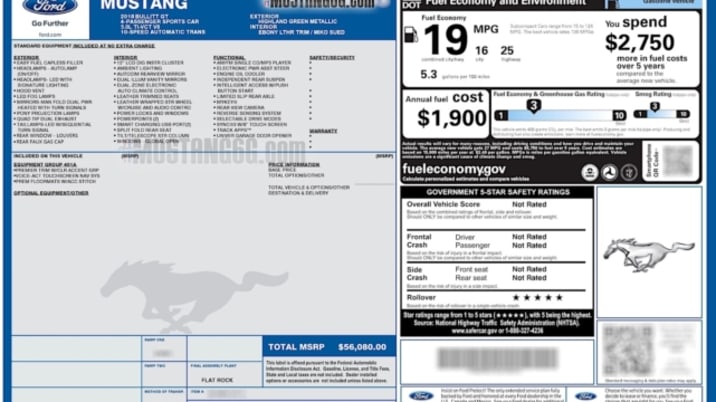 The pricing breakdown is a little strange. There's no pricing for individual options or destination, just a final MSRP of $56,080. That's roughly $20,000 more than a base Mustang GT, though the Bullitt GT includes things like the LCD instrument cluster and a full leather interior. Other Bullitt touches are likely to include unique wheels and possibly front and rear fascias.

Since this is just a leak, there's no way to say when the car will go on sale. We don't even know when the standard model will go on sale. Another leak from Mustang6G.com showed another window sticker that revealed the car's fuel economy. It seems someone within Ford has been handing out Monroneys to the public.