More powerful and more efficient, sounds good to us So fuel economy is usually one of the last things that's on the mind of a muscle-car or sports-car buyer, especially one that makes 460 horsepower such as the 2018 Mustang GT. But if a car can be any more frugal than it is, that's always a nice bonus. According to a window sticker found by online forum Mustang6G.com, the new Mustang GT is slightly more efficient than the outgoing model. 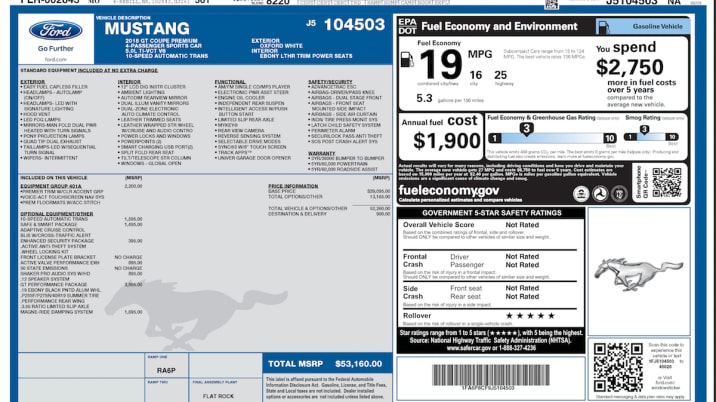 In each EPA fuel economy category (city, highway, and combined), the new Mustang picked up an extra mpg. It now gets 16 mpg in the city, 25 on the highway, and 19 combined. It's not an extraordinary improvement, but it's not terrible considering that the engine also makes 25 more horsepower and 20 more pound-feet of torque than the previous model.

It should also be noted that this fuel economy rating is only for the 10-speed automatic Mustang GT. It's possible that the manual transmission model will have a different rating. On the previous model, opting for the six-speed manual would also yield an extra mpg on the highway (25 vs. 24). It's possible the new Mustang's fuel economy gain is because of the 10-speed automatic, so we wouldn't really expect any change to the current manual Mustang's fuel economy.