It's an all-wheel-drive crossover. It plugs in. And it's coming to America at just the right time. View All Specs
SANTA CATALINA ISLAND, Calif. — For years now, while the Mitsubishi brand has languished here in the U.S., other parts of the world have been enjoying the Outlander PHEV. It's Europe's best-selling plug-in hybrid, and Mitsubishi has been improving on it over the years, testing it, refining the technology and punishing the vehicle in competitions like the Baja Portalegre 500 and the Asia Cross Country Rally. Now, as electric vehicles begin to gain greater acceptance, and as Mitsu turns its brand around, it will finally offer the Outlander PHEV in America at the end of this year.

As Mitsubishi prepares to launch the Outlander PHEV stateside, we had the rare opportunity to drive it across the interior of Santa Catalina Island, off the coast of Los Angeles, to test it out on some rugged, scenic roads.

Sitting inside the Outlander PHEV, we were actually pleased with the interior. It was simple and clean, and the plastics didn't feel especially cheap. Sure, it wasn't the thoughtful design or plush touch points of the other available plug-in crossovers on the market, but the Outlander PHEV also doesn't share the same price tag. We definitely found it to be more attractive and appealing than the inside of, say, a Chevrolet Equinox. If you were expecting a pile of hot garbage from Mitsubishi, you're way off. 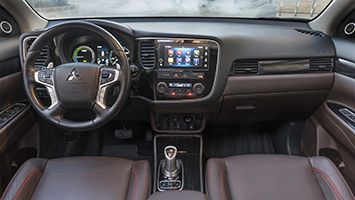 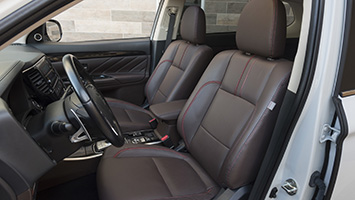 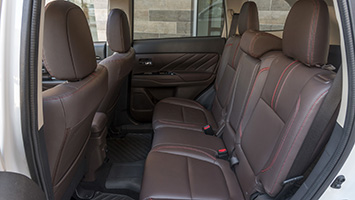 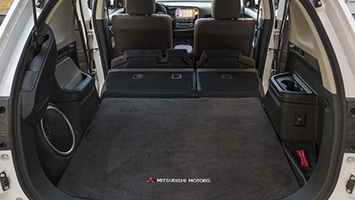 When we popped open the rear liftgate to take a look, we found our near-ideal tailgating vehicle. In the rear cargo area was a ton of space, a large speaker, cupholders and a standard three-prong outlet, perfect for plugging in a slow cooker, blender, or any other appliance you could find useful at a football game or campsite. Later, when we would take a break from our drive at Catalina Island's Shark Harbor, we'd be treated to a smoothie prepared in a blender plugged into that AC outlet.

If you happen to use all 12 kWh of energy, the gas engine will fire up to serve as a generator. The Toyota 4Runner may have had the "Party Mode" button, but the Outlander PHEV would be our pick for the stadium parking lot.

As we passed through a gate at the edge of the town of Avalon and headed up a dirt road across the interior of Catalina Island, we were quickly impressed with the way the Outlander PHEV handled the rocky, dusty trails from which most drivers are normally prohibited. The steering feel was light but communicative, and we were really able to tell what was going on between the front wheels and the rugged surface beneath them.

For green drivers, having three driver-selectable modes available, along with various levels of regeneration, gives a sense of control. Mitsubishi took the geeky route. "But for a normal customer, they just want to drive this vehicle like any other vehicle — they don't need to."


It remained composed in the corners, its low center of gravity and Super-All Wheel Control (S-AWC) four-wheel-drive system minimizing roll and providing stability. It took a fair amount of effort to get this thing to give up any traction, and we weren't keen on attracting the ire of conservancy rangers by flagrantly breaking the island's 25 mile-per-hour speed limit on blind corners to do so.

The Outlander PHEV borrows those fantastic paddle shifters we loved so much in the Lancer Evolution. They serve a different purpose here, though, as this plug-in only uses a single, fixed reduction gear. Instead, the paddles adjust the strength of the regenerative braking. There are five levels of regen (six if you count the zero-regen setting), allowing you to choose between coasting, and something near one-pedal driving. While full regen won't bring you to a complete stop, it will slow you down significantly. We found the varied range of regeneration especially useful when descending a steep, bumpy hill. 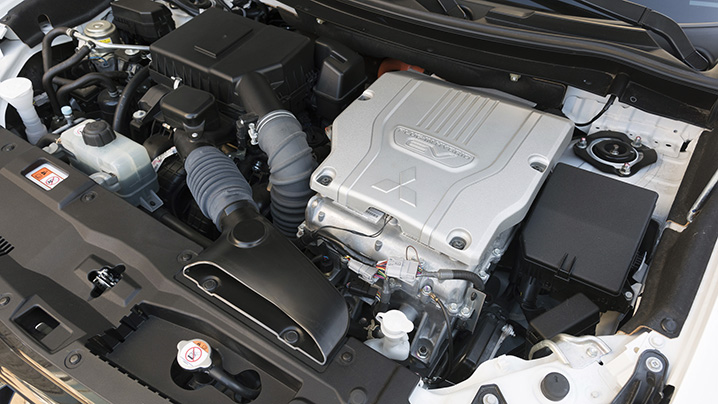 The car has two suites of drive modes, one automatic, the other selected by the driver. The car will automatically choose between all-electric, parallel hybrid (using both the gasoline and electric motors to drive the wheels) and series hybrid (gas motor works as a generator) driving. It selects whichever of the three modes will provide the most efficient driving under the current driving situation, whether cruising through town or on the highway, or towing or driving uphill.

The three driver-selectable modes are chosen via buttons on the center console. The EV button makes all-electric driving a priority, but the gas engine can still come on if the situation (low charge or heavy acceleration, for instance) requires it. The Battery Save button maintains up to 90 percent of the battery's charge (that extra 10 percent allows room to take advantage of the regenerative braking without wasting that free energy). Battery Charge mode keeps the engine running in order to charge the lithium ion battery, making sure you always have enough power when you need it. We found that the vehicle had ample power climbing the steep Catalina hills in EV mode, and if the engine ever came on, we didn't notice. When not in EV mode, the engine was still quiet, and we only heard it working hard when we were really pushing the car with a low charge.

For green drivers, having those modes available, along with various levels of regeneration, gives a sense of control. On some electrified vehicles — the Chrysler Pacifica Hybrid and Hyundai Ioniq Hybrid and Plug-In come to mind – that level of interaction is limited in order to provide an approachable, straightforward driving experience for the mainstream buyer. Mitsubishi took the geeky route. 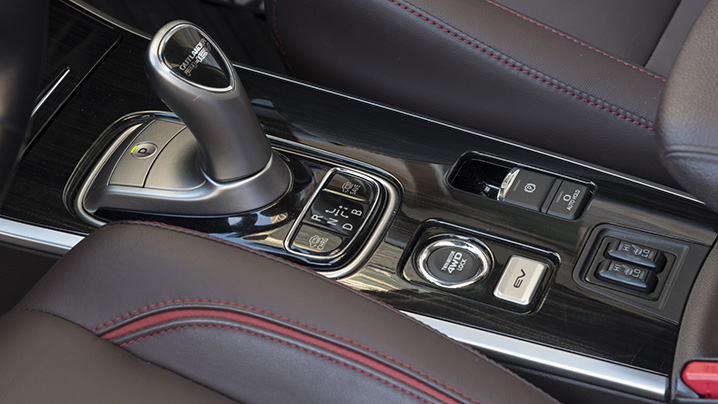 "From our market research, some of the real EV or PHEV, more knowledgeable customers want that control of their battery," Nate Berg told us. Berg is Mitsubishi's senior manager of product planning. "But for a normal customer, they just want to drive this vehicle like any other vehicle — 'I don't want to press buttons, I don't want to worry about modes' — they don't need to."

It's the sort of thing that once you know the car, you'll be able to use your experience and know-how to plan your routes for maximum efficiency. An entertaining challenge, to be sure.

The timing sure seems right to introduce the Outlander PHEV to America. Yes, gas prices are low, but demand for electrified vehicles is increasing, and seemingly everybody (but Dodge) is getting in on the action. Plus, the Outlander PHEV has a segment advantage. America's hunger for crossovers and SUVs seems insatiable right now, and this one is priced within reach of a lot more customers than other PHEV CUVs (and it offers DC fast charging).

By the way, EV driving range and fuel economy figures will be released soon, but Mitsubishi says it expects to exceed the premium competition (which offer about 14 miles of EV range).

The Outlander PHEV could also stand to do well in fleet sales. It's already proven itself in Europe, and if it's good enough for the Ukrainian police, it'll be good enough for U.S. companies or organizations that want to project a greener image and save money on fuel costs. 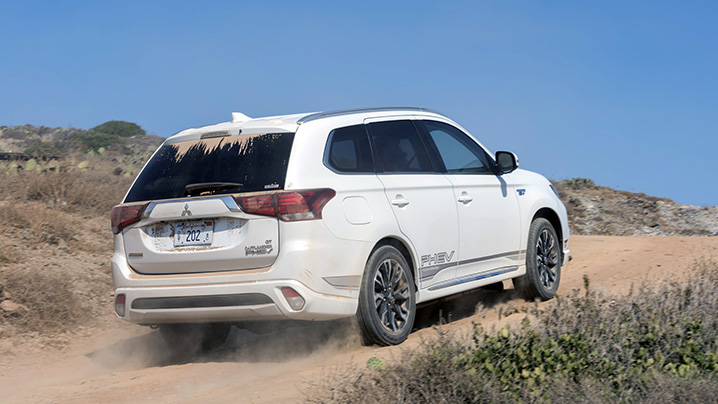 So is the Mitsubishi Outlander PHEV something we'd consider owning? Absolutely. Put it on our short list for now, and we'll get back to you to confirm once we've had the chance to drive the vehicle on the highway. If you're someone who wants to do most of their driving under electric power, but needs the freedom and practicality of an all-wheel-drive crossover, we'd definitely recommend giving this one a test drive, particularly if you live in a single-car household.

Take a look again at that last sentence. Mitsubishi may have fallen off your radar over the past decade, but the set of needs this vehicle serves is a pretty huge and underserved sweet spot.

The Outlander PHEV will hit U.S. dealerships in late December 2017 with a starting MSRP of $35,535. A fully loaded version costs $41,235. The vehicle is also eligible for a federal tax credit of $5,836, as well as any local incentives. 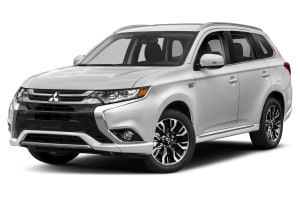