James Riswick
Volvo wagons are back! They're even cool, and it's fantastic. Hipsters are driving the old ones around to pick up gourmet doughnuts and sixers of quadruple IPA, while the new ones are some of the best-looking cars on the road. Sure, the XC90 and XC60 are crossovers, but they have a lot more in common with wagons than ye olde SUVs. And then there's the new Volvo V90 wagon and its Cross Country off-roadish sibling, which are equal parts utilitarian and gorgeous.

As the luck of scheduling would have it, there was a 2017 Volvo V90 Cross Country sitting in my garage the week before setting off for the 2017 Volvo XC60 first drive in Spain. I wouldn't be able to compare and contrast the two directly – driving them days and continents apart somewhat quells scientific results – but there was more than enough time to determine how they're similar, how they're different and why you might prefer one wagon (quasi or real deal) over the other.

For starters, the V90 CC is the bigger and more comfortable vehicle. According to the spec sheet, the new XC60 has more rear legroom (38 inches versus 35.9) but in practice, I had more legroom in the V90 CC with the front seats set to a comparable position. And although I didn't have one handy, I'm wagering that a rear-facing child seat will fit better in the V90 CC, which can also be had with integrated child booster seats unavailable in the XC60. 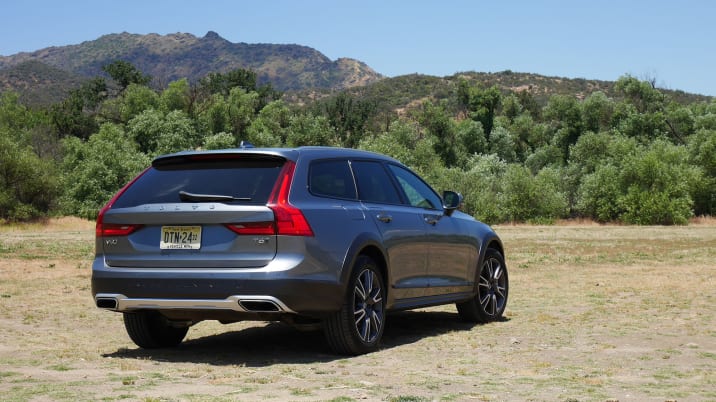 Cargo capacity goes to the V90 CC. Its cargo area is deeper and despite not being as boxy as old Volvo wagons, there's still more space to be found up high where it could matter for carrying dogs or bulkier items. The V90 CC is also 5 inches shorter in height than the XC60, making it easier to load things onto the roof – a virtual wagon certainty, if driving around Oregon and Colorado is any indication.

And then there's the matter of comfort. The V90 CC is one of the most comfortable-riding cars I've driven in recent memory, soaking up bumps exceptionally well on its 19-inch wheels, high-profile tires and optional rear air suspension. It doesn't succumb to high-frequency bumps (say on Southern California highways) as the S90 sedan does, and never comes close to exhibiting the harshness of the XC90 on 20- or 21-inch wheels. It was difficult to gauge the XC60's ride due to the excellent Spanish roads, but it certainly felt more like the S90 and XC90, and I would strongly advise sticking with its 18- or 19-inch wheels.

Doing so likely won't match the V90 CC's buttery smoothness, but it should still maintain the XC60's dynamic advantages. In short, it's the sharper, more engaging vehicle to drive. Whereas the V90 wallows about in turns and seems as interested in tackling a mountain road as a Corolla-driving septuagenarian, the XC60 exhibits a crisper turn-in and tauter body control. You're also sitting closer to the front wheels in a more eager position that perceptually encourages you to toss it around a bit versus its more laid-back sibling. Sport utility, indeed. Inside, the two Volvos look awfully similar at first glance and don't really differ much on second and third glances, either. Both share the same control layout with the same air vents bordering the same standard vertically-oriented Sensus touchscreen. It's been updated in both cars from its original version, with four "tiles" now perpetually on-screen allowing for quick access to the most popular menu screens: navigation, telephone, audio and the currently used app, which would probably be Apple CarPlay and Android Auto. In the case of the latter, this setup allows you to view the Apple/Android and Volvo controls simultaneously, eliminating the annoying go-between experienced in most other cars.

There are differences, though. Note the placement of the dash trim in both – the V90's is placed separately in larger blocks whereas the XC60's snakes in one piece along the bottom. The wood trim color itself differs in both, while the XC60 has a little Swedish flag embossed in the metal trim under the passenger-side air vent. From there, there are quality differences too. The XC60 has matte-finish window switches as the old model did, whereas the V90 has richer gloss buttons. No big deal, really, as the center console knobs and buttons are the same. The center console itself is different, though, as the XC60's lacks the V90's leather(ish) wrapping that certainly elevates the cabin. The seats and their leather are the same, as is most of the available feature content. 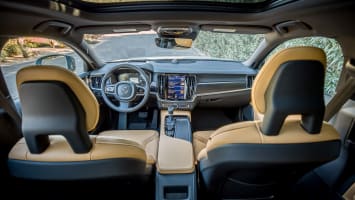 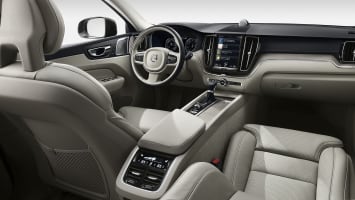 Of course, how much of that feature content you get standard does differ. The V90 Cross Country only comes in T6 AWD guise and therefore only with the turbo- and supercharged 4-cylinder engine good for 316 horsepower and 295 pound-feet of torque. The base price is $55,300 and the only options worth considering are the rear air suspension, a 19-speaker Bowers & Wilkins sound system, a Convenience package (auto parking, surround-view parking camera, a cargo organizer) and the Luxury package (four-zone auto climate control, fancier but stain-attracting Nappa leather, front seats with additional adjustments and massage, heated rear seats and rear side sunshades).

Unlike the V90 CC, you can get the XC60 with a less powerful engine that starts at $42,495. The base XC60 T6 AWD Momentum model starts at $45,875, but you have to pay extra for things like the LED headlights, drive mode settings, adaptive cruise control, the all-digital gauges and navigation that are included on the V90 CC. You can get that stuff on the XC60 for around $52,000. When equipped equally to my $64,640 Cross Country press car, an XC60 would hit the register at around $60,445.

Clearly, then, the 2018 XC60 is the cheaper car, and there's something to be said for its greater variety of powertrains and trim levels. However, it's also smaller, less comfortable and ever-so-slightly less luxurious, which would seem to warrant the price gap. I'd personally prefer the V90 CC – despite its body cladding and lift, it's still a real wagon, and what kind of automotive writer would I be if I didn't choose the wagon?