The XC90 is bigger, but this crossover is more important. The 2018 Volvo XC60 should really elicit a stronger reaction, but it just doesn't. Blame its 90 series siblings, which already exhausted "wow" reactions that could've gone to the XC60. Even excellence can become expected. There's also the matter of its predecessor – sure, it was dated, but gradual improvements to what was always a solid car allowed it to be Volvo's best-seller to the very end.

So, there's very little surprising about the 2018 XC60, but that ultimately means Volvo is in a very good place with its second-generation compact luxury SUV. It rides on the same Scalable Product Architecture (SPA) platform as the XC90, S90, and V90, sharing their double wishbone front axle setup and integral link rear axle with transverse leaf springs. Yes, like a Corvette. It can also be specified with the XC90's four-corner air suspension with automatic leveling and computer controlled dampers.

Yet, despite the similarities in componentry, the XC60 was tuned for what Volvo calls "inspired confidence." The 90 cars are going for "relaxed confidence." Marketing talk yes, but it's on-point. We drove the XC60 and V90 Cross Country back-to-back, and the 60 feels more engaging and slightly playful, with a sharper turn-in and tauter body control. It might even coax you into playing with it on a twisting mountain road. 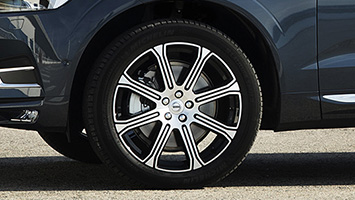 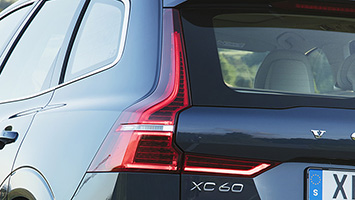 Ah, if only there was one of those around. Our drive route around Barcelona was an interminable series of roundabouts connecting stretches of motorway and mildly meandering country roads. The briefest winding bits were inevitably clogged by box trucks and there was even an inordinate number of student drivers everywhere.

Judging the ride was also difficult, but in this case, it's because the Spanish roads are too good. There was no way to tell if the nervousness experienced in the S90 and XC90 over high-frequency bumps carries over, but the XC60's ride certainly feels more similar to those cars than the truly supple Cross Country. Either way, sticking with the 18- or 19-inch wheels is highly recommended – anything bigger could make things harsh, as in the XC90.

But it's a good thing that the XC60 is cut from the same cloth as its siblings. The old car always lacked some refinement, specifically related to its primary controls. The throttle tip-in and steering effort lacked polish, and in general, it just didn't feel as refined nor mechanically sophisticated as its contemporaries. That's no longer the case.

Like the XC90, all three XC60 models have 2.0-liter four-cylinders with different means of power enhancement. While they can seem out of place in the bigger, heavier XC90, their sound and power delivery play much better in the XC60's segment that's almost entirely powered by engines of equal cylinder count. 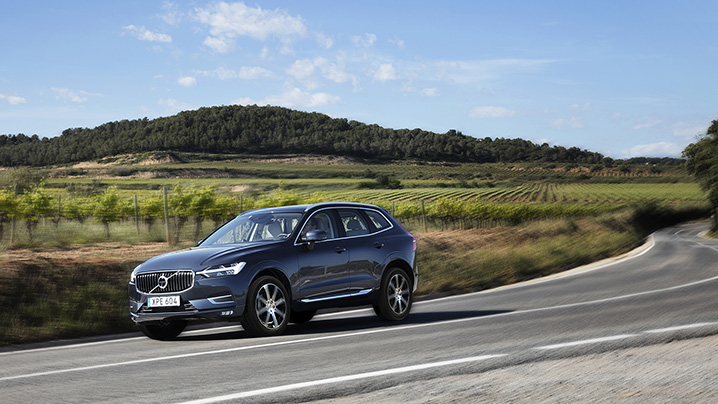 The T5's inline-4 is turbocharged to produce 250 horsepower and 258 pound-feet of torque, and is likely to be your best bet given its competitors' similar outputs and estimated 0-to-60 times (6.4 seconds would be within a few ticks of the Mercedes-Benz GLC300). Only the T6 was sampled in Spain, but we found the T5 to be more than capable in the slightly heavier S90 T5 that also managed to get 29 mpg in a week of mixed driving (bettering the EPA estimates).

By contrast, the T6 engine has returned worse fuel economy than the government would indicate and judging by the in-car meter in Barcelona, that's unlikely to change in the XC60. The T6 has a turbo- and supercharger, with the former working all the time and the latter working up to about 3,500 rpm to provide a deeper well of low-end power. You can actually hear it whine a bit. The combo is certainly effective, producing 316 hp and 295 lb-ft of torque, and sending the XC60 to 60 mph in an estimated 5.6 seconds. That would theoretically be on-par with a Porsche Macan S and BMW X3 xDrive35i, but it never feels that quick.

Then again, a whole bunch of electricity might be better still, as the T8 plug-in hybrid pairs the T6 engine with a rear electric motor and a battery pack underneath the center console. Its total system output is 400 hp and about 470 lb-ft of torque, good for an estimated 0-60 time of 4.9 seconds. Like the other engines' fuel economy estimates, T8 EPA range estimates haven't been released, but one would assume they'd better the heavier XC90 T8's 14-mile all-electric range and 54-MPGe estimate.

Apart from the T8, though, the XC60's engines are roughly the same as the previous model's. The same cannot be said about its size. Mark II gains 2.4 inches in overall length and 3.9 inches of wheelbase, but loses 1.6 inches of height to create a longer, lower and more elegant profile. Ground clearance is down from 9.1 inches, but the remaining 8.5 is more than most offer. 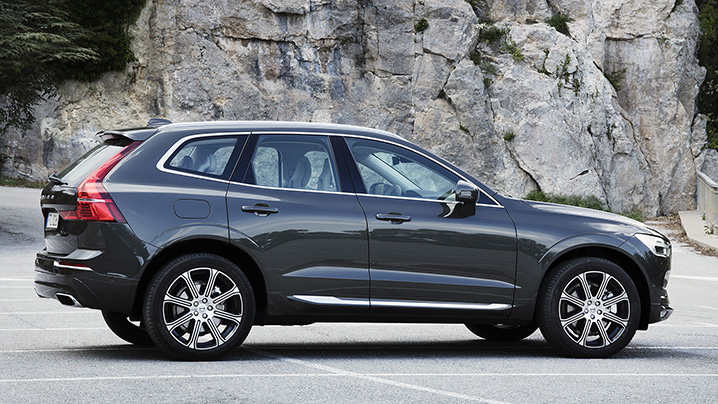 Sadly, that lower height does chew into overall cargo capacity. Although dimensions from floor to seatback are within a cubic-foot from generation to generation, total cargo capacity has been reduced to 63.3 cubic feet from 67.4. That's actually still pretty good for a segment typically in the 50s, but if you're looking to haul bulkier items and stay in the Volvo family, the V90 and XC90 are still the way to go.

Rear legroom is also up by 1.6 inch and despite the lower roof and non-reclining seatback, someone 6-foot-3 still has plenty of headroom below the standard panoramic sunroof. The previous model wasn't particularly popular with parents (75 percent of buyers were sans child), which probably explains why you can no longer get the integrated child booster seats. Instead, every XC60 gets an under-seat tray for storing tablets or, possibly more likely, hiding garbage.

Up front, the modern design is hard to distinguish from its pricier siblings. The main visual difference is the sliver of metal or wood that snakes its way under the air vents and Sensus touchscreen, ending on the passenger side above a little Swedish flag embossed in the adjacent metal trim. The Inscription trim's light-colored open-pore "Driftwood" is particularly nice. However, we'd caution against opting for the upgrade Nappa leather in lighter colors – it absorbs denim dye like a sponge. Volvo is "aware of the problem," but in our experience with low-mile test cars at least, the standard leather better resists the dangers of Levi Strauss & Co. 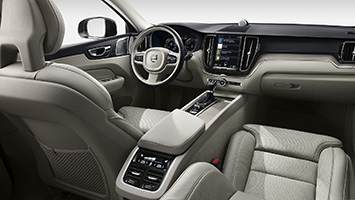 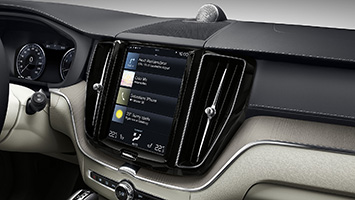 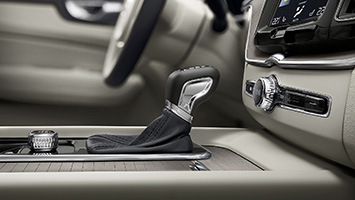 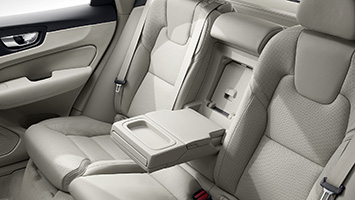 Really, though, the differences in quality between the XC60 and the 90 are seemingly negligible. Volvo certainly didn't cheap out on feature content, either, as even the base XC60 T5 at $42,495 comes with LED headlights with Thor's Hammer accents, 10-speaker audio, a power liftgate and Volvo's 9-inch Sensus touchscreen. The latter has been upgraded to always show four main "tiles," keeping audio, navigation, and telephone buttons on-screen to prevent going between menus. They even remain, along with the always-present climate controls, when standard Apple CarPlay and Android Auto are in use. Going between the OEM and Apple/Android systems can be an exercise in frustration in virtually every other car.

Perhaps most impressively, though, virtually all of Volvo's latest safety tech enhancements come standard, including a low- and high-speed collision avoidance system that detects pedestrians, cyclists and large animals. Not only does it automatically brake when needed, but unique to the XC60 (for now), it also helps the driver steer at speeds between 31 and 62 mph. Also standard are a driver inattention monitor and an advanced lane-departure warning system that can automatically steer to avoid oncoming cars. Blind-spot warning, the Park Assist automatic parking system, and Volvo's Pilot Assist adaptive cruise control with steering assist are optional.

Indeed, you get an awful lot of car for your money in the 2018 XC60. To get the same standard infotainment and safety tech on an Audi Q5 or Mercedes-Benz GLC300 (both of which have comparable base prices), you'd have to spend a lot more on additional options that would raise the price by as much as $10,000. That gap disappears when you slather on equipment, though, as our T6 AWD Inscription test car with virtually every available option would likely hit the register at $60,640 – a comparably loaded GLC300, admittedly with less power, would be about the same price. A Q5 would be a few thousand less.

But no matter the dollars and sense, the XC60 should definitely be considered alongside that pair or anything else in the segment. It has the equipment, space, quality and safety to be considered a smart buy, along with the style and character to make it an impulse one. Just don't expect many surprises.