Our trip to try out the Volvo V90 Cross Country started with a visit to a massive Swedish failure. Stockholm's Vasa Museum houses a 17th century war ship that sank not far from its harbor. The reason it sank was that it was too tall and top-heavy, and it tipped enough that water came in through the gun decks. It was an odd place to start a trip focused on a Volvo that is taller and more top-heavy than your average wagon. But after having driven the new V90 Cross Country, we have a feeling it won't suffer the same fate as that old ship.

While it has the crossover look, the Cross Country is a wagon built on a strong foundation. Inside and out, the car is generally the same as the S90 sedan and upcoming V90 wagon, and that means it shares the same simple, elegant interior and broad-shouldered stance. It has been updated with a few Cross Country exclusives, most obvious being its increased ride height – about 2.4 inches higher for a total of 8.3 inches of ground clearance. And, like other wagon-cum-crossovers, it has big plastic fender flares, plus more aggressive front and rear bumpers. If you're not into the rugged look, those contrasting plastic bits can be changed to body color with the addition of an available Luxury Package.

The interior, which has solid visibility thanks to the low beltline and generous amounts of glass, also features some model-exclusive touches such as fancy "pearl" stitching on the seats, red gauges, and an available dark wood finish on the dashboard. The latter feels very premium, though it's so dark you may have to lean in pretty close to tell that it really is wood. In fact, my co-pilot initially mistook it for plastic. In fairness to him and the trim, the sun was still coming up.

Mechanically, the car is mostly the same as its normal-height brethren. Under the hood is Volvo's T6 twin-charged 2.0-liter four-cylinder, which sends 316 horsepower and 295 pound-feet of torque to all four wheels. It's a thoroughly responsive little engine, exhibiting almost no lag when pressing the pedal, and plenty of pull when flooring said pedal. You can even hear a satisfying hint of supercharger whine coming from the blower. Power goes through an eight-speed automatic transmission that is generally very smooth in any of the three main drive modes – Eco, Comfort, and Dynamic. However, in Eco and Comfort, it can be sluggish to downshift, and the manual mode is a bit slow to change gears, too. It's also worth noting that the V90 Cross Country features the same "All Wheel Drive" drive mode as its XC90 crossover cousin. This mode adjusts throttle and steering to assist with driving on rougher terrain, but is only available at speeds under 25 mph. It also will engage hill descent control as needed. 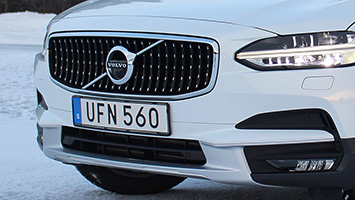 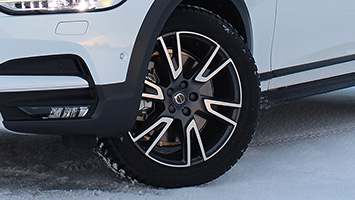 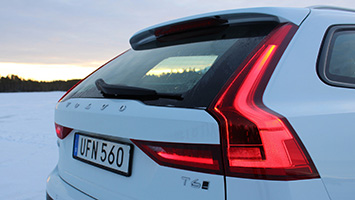 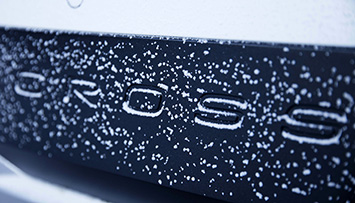 The Cross Country's smooth ride comes courtesy of mildly retuned suspension, and, in the case of the car we tested, an optional rear air suspension for load leveling. Volvo explained that it doesn't offer air suspension at the front because it wouldn't fit under the car's hood and fenders. Volvo also developed special tires for the Cross Country's new suspension, but we didn't get to sample them because our test car was instead equipped with aftermarket studded tires for the icy Swedish road conditions and so we could drive on a frozen lake. So while we can't vouch for the effectiveness of the stock tires, we did find the updated suspension to be quite nice. Driving on fairly rough Swedish back roads, the Cross Country managed to smooth out the various bumps and dips without feeling floaty or uncontrolled. Occasionally more abrupt bumps and sudden crests would make themselves known, but the car never felt uncomfortable.

Handling in the Cross Country is much like in the S90 and V90 – the car feels quite secure in corners, with just some mild body roll. In fact, it doesn't really feel as though it's sitting another two inches in the air. On an ice course, we learned that the Cross Country will perform big drifts admirably. The non-defeatable traction control provides a wide berth for sliding shenanigans when set to the less-intrusive sport mode. The car's seatbelt pre-tensioners don't always get the message, resulting in a pretty intense constriction around the torso from time to time. Still, the average driver probably won't be running into this issue, and if they do, there's probably reason to pull the belts tight. 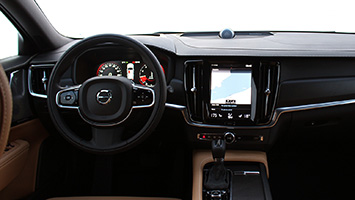 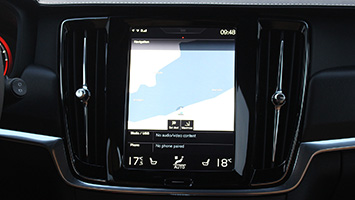 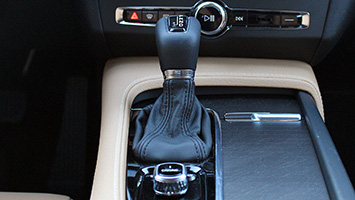 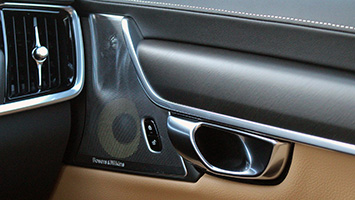 As fun as it was to powerslide this big car on the ice, that's as enthusiastic and sporty as it gets. The steering itself is weighted nicely, even when it becomes heavier in Dynamic mode, and it's precise and accurate even just off-center. However, it lacks much feel, and it has a slow steering ratio. This was of course evident in our furious steering and counter-steering on the lake, but also when making 90-degree turns on the street. The brake pedal is also a bit soft, but we found it more linear and predictable than that of the last S90 we drove.

Chances are the average lifted Volvo wagon buyer isn't looking for something sporty. If you're willing to trade in some back-road dynamism, you'll find the V90 Cross Country is one of the most pleasant and relaxing wagons money can buy. As for how much money, you'll be spending at least $56,250 for a bare-bones V90 Cross Country when they hit dealers around March. That undercuts the outgoing Mercedes E-Class wagon, which retails for $60,825. This means the Cross Country will probably be cheaper than both the updated E-Class wagon and its new raised All Terrain variant. 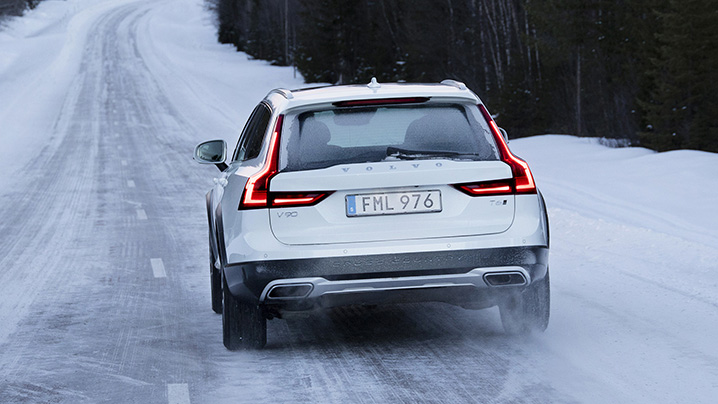 Really, the Cross Country's closest competition by price may be internal. The XC90 crossover starts at $46,745 for a front-wheel-drive T5 model, and $53,245 for the all-wheel-drive T6, which has the same engine and drivetrain as the Cross Country. Not only that, but the XC90 offers more traditional SUV styling cues, more cargo space, and a third-row seat. However, if you're like us, you'll be willing to pay a little more money for the Cross Country's sexy wagon lines. Or you can wait for the lower, standard V90 coming later this year with an even lower price.