This balanced coupe with BMW's typical competent handling and clean, cautious styling suffers from a frustrating infotainment system and a lack of personality.

9
View All Specs
Add a Review
While we love the M2, not every version of the BMW 2 Series is a barnstormer. The looks and size promise a small, nimble sports coupe, but non-M or M-Performance variants fall a little flat on a back road. Then again, not everyone is in the market for a sports car. Some just want a handsome coupe that's relatively easy to fit into a parking space.

In the US, the 2 Series is offered in two flavors, the 230i and the M240i. Both are available with or without BMW's xDrive all-wheel drive system. Our Valencia Orange test car was a 230i with xDrive. It has a slick eight-speed automatic, though a manual transmission is available across the board. The 2 Series starts at $34,145, decent for the class. That said, options can easily send the 230i well over $40,000.

Associate Editor Joel Stocksdale: I can't say I came away loving the BMW 230i. It has a lot going for it. It's an attractive little coupe, and as a fan of small cars, the size was great. I also was impressed to find that it had a commodious trunk for such a small coupe. The turbocharged four-cylinder's 248 horsepower and 258 pound-feet of torque are plenty to have fun with, and will get you up to speed much more quickly than you would expect.

But it's in the details that the 230i let me down. Despite being a sporty little coupe, you sit somewhat high off the ground. It felt more like a tiny economy sedan than a backroads bomber. I also found it to lean and wallow more in corners than I would want in a sports coupe, even with $2,300 Track Handling Package. In addition, the steering, while nicely weighted and precise, is shockingly numb. Add in a slightly laggy engine, and the car lacks the precision and nimbleness that makes little coupes fun.

But maybe the entry-level BMW 230i isn't meant for sports car people. If you just want a comfortable ride, good power, and stylish looks, it does the job admirably. But if you need something more lively, make sure you pick out the performance options, or maybe consider something else.

Editor-in Chief Greg Migliore: I had some fun in the BMW 230i. It looks good. It's reasonably peppy. The steering is decent. It's just a nice car to have on a summer night. That being said, it's expensive. We have a lot of options on this thing, but the $50,070 sticker is lofty. As an enthusiast, I feel like there's better ways to spend your money. Sure, this is a personal luxury coupe and that's pretty niche these days, but this one lacks that singular special quality. BMW openly traces the 2 Series' lineage to the 2002, which seems ambitious. I really enjoyed driving the 230i, but it wouldn't rank high on my shopping list.

Enjoyed some seat time in the @BMW 230i. It's so orange! pic.twitter.com/W9LHfeVyGj


Senior Editor, Green John Beltz Snyder: After a long day writing about muscular Dodges, and with the dense commuter traffic having already cleared by the time I set out, I headed home in the 230i xDrive. That drive was almost a form of high-speed meditation. The itchy, uneasy feeling one feels in their brain after a period of intense focus was replaced with the simple, clear mind that comes with connecting with a balanced coupe on uncomplicated roads. It feels really cathartic to wring this car out.

2.0-liter turbo motors are generally enjoyable, and this one is no exception. It's responsive, and supremely tidy feeling. On my commute, I didn't notice any turbo lag, with BMW's twin-scroll setup providing predictably linear response. I enjoyed playing around with the powertrain, feeling its smooth acceleration, quick shifts, and reassuring but unobtrusive engine note. In the few corners I encountered on my drive, I was able to push the Bimmer fast and steady around the bends with plenty of grip ­– adding power made it feel more stable, even – and little sense of weight to fight.

The next morning was a lazier commute, and I just enjoyed the comfort and ease of the 230i. This car would make a great companion for the varied, contemplative driving of a solo road trip. Let's just pretend that the sticker price on this particular tester isn't $50k.

Managing Editor Greg Rasa: With an hour to spare midday to photograph this car, I dashed around town looking for settings that would complement the Valencia Orange. It's a smashing combo with the cream leather interior, and Valencia describes the color perfectly. Props to any automaker that offers anything beyond the usual depressing palette of black, white, silver, gray, and darker gray. Here's to colorful cars.

Ducking down roads and zipping in and out of circle drives, the 230i seemed nimble and responsive in around-town maneuvers. I lucked upon a long line of traffic cones and pulled the 230i up for an orange-on-orange shot. Since it was near a construction zone, it seemed imprudent to run them, so who knows how the car might have responded. But it sure looked good sitting there.

It's a nice car inside, and if two places with a vestigial backseat are all you really need, there's a just-right feel to its size. The driver's seat was a good fit and brought back memories of a BMW I owned long ago, as it shares a feature that in my youth seemed so exotic - a seat-bottom thigh extension. The car's enjoyable around town, and I'm sure it would be comfortable on a long trip. But, yeah, $50 grand? There are other cars, even other BMWs, that compete for that kind of money.

Do love that color, though - but sadly, Valencia Orange does not appear to be available on the sibling M240i.

Associate Editor Reese Counts: I really like the size of the 2-Series. It's the smallest BMW sold in the US, but for a young married guy with no kids, you really don't need anything bigger. If you get out the tape measure, you'll find that it's within an inch or two in every dimension as the E46 3-Series, which says more about the 3-Series than it does for this 230i xDrive. It shares the same engines as the current 3 and 4-Series, but the smaller size and lower weight make it feel lighter on its feet. In my opinion, it's more fun than the larger cars, too.

That said, this is not the 2-Series I would choose. First off, I'm not sure I could buy a BMW with fewer than six cylinders. This is a lovely little 2.0-liter turbocharged inline-four, but the current inline-six is as smooth as Jif creamy, and as wonderful to listen as the remastered version of Abbey Road. It's an engine that begs to be revved out, and the 2.0-liter just doesn't have the same character.

Then there's the price. As others have mentioned, this one stickers for just over $50k. I priced a perfect performance version (manual, summer tires, moonroof delete, limited-slip, etc.) of the current M240i, and it came out several thousand less than this 230i. The M2 starts at just a few grand more. The 2-Series is currently my favorite BMW. Just not this 2-Series.

Senior Producer Christopher McGraw: I spent one night in the BMW 230i, most of it on the highway. On the inside, it was pretty comfortable; I even found the rear seats to be tolerable, but at 5'7" that's not really a ringing endorsement. The tech is there, even if it takes a few tries to pair your bluetooth (my experience with more than one BMW), and this particular vehicle came with wireless Apple CarPlay, a personal favorite.

On the outside, it looks great. Valencia Orange might be my new favorite color for BMW that isn't blue. The eight-speed automatic shifted with ease, and the paddles were responsive. I didn't notice a ton of turbo lag, and the steering was tight. All that said, I still did a bit of disconnect from the road that I didn't feel in the M2, which is only $2,000 more, and with a sticker north of $50,000, I'm not sure that this is the car I'd choose. 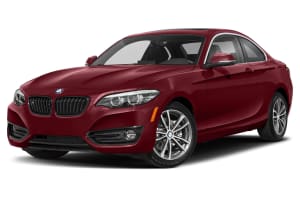