"If you're not hurt, we'll be really pissed. If you are hurt, we'll still be pissed, but not quite as pissed."

These are the words from Jim Wilder, the vehicle development manager of the 2018 Dodge Challenger SRT Demon, that echo through our head as we slide behind the wheel of the car for the first time. He was warning us about driving beyond our abilities, and keeping the car out of the wall. With 840 horsepower and 770 pound-feet of torque on tap from its supercharged, 6.7-liter V8, the Demon does 0-60 miles per hour in 2.3 seconds, and 0-30 mph in a second flat. If something does go wrong, it'll happen quickly.

Following that talk, we had our guts sloshed as a passenger in a blurry eighth-mile run, giving us a taste of the G forces (the Demon can pull 1.8 G in a straight line) we'd feel when we got in the driver's seat for our own pass down the drag strip. We're already sweating.

It had rained - you could describe it as torrential - the day before. The grassy parking areas surrounding Lucas Oil Raceway were still flooded, but any water on the pavement had evaporated and hung in the air. Combined with the heat, we were sticky and uncomfortable.

In Drag Mode, the Dodge Demon's air conditioning turns off. Any condensation that it could leave on the track would be a problem, plus we need to reduce parasitic power losses for a faster run. The system is still working, though, the refrigerant diverted to the chiller system cooling the air coming into the engine. There's still condensation, but the Demon collects it on a catch pad to keep it from ending up on the pavement. 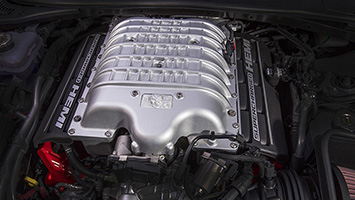 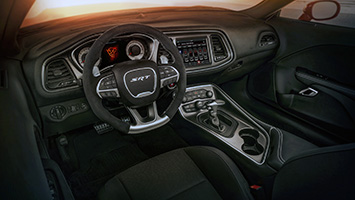 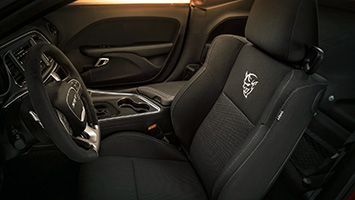 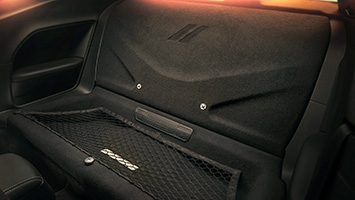 We're also required to roll the windows up when entering the drag strip. For one thing, it helps keep the smoke out of the cabin during the pre-staging burnout. So, yeah, it's hot as Hell in the Demon.

We pull through the water box and run through the sequence – which involves holding the "OK" button on the steering wheel usually used to navigate menus, and applying a specific amount of brake pressure before getting on the throttle to initiate the burnout. This gets any crud off the rear tires and heats up the rubber.

There are multiple ways to launch the Demon. We had an instructor sitting in the passenger seat as we pulled up to the beams that trigger the Christmas tree at Lucas Oil Raceway. He walks us through the most complicated of the three he had explained to us just minutes before when we were in the passenger seat. With our left foot on the brake, we pull on both of the shifter paddles on the back of the steering wheel. Next, we gingerly apply throttle with the right foot, bringing the RPMs up to between 1,100 and 1,200, and let go of one paddle. "Off the brake," the instructor tells us. Overriding every bit of our muscle memory from years of driving that tells us it's a bad idea, we lift our left foot. Our finger on the remaining shift paddle is what keeps us still. 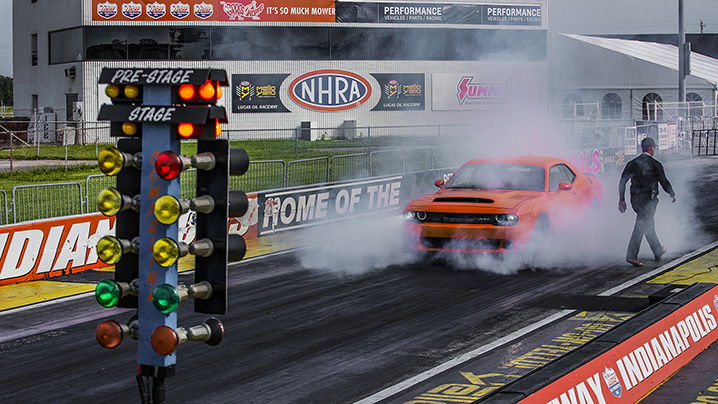 The man in the passenger seat (whom we can't see on account of our limited view from the helmet and the tunnel vision that accompanies the adrenaline hit one gets just before launching a satanic, 840-horsepower car down a narrow drag strip) says, "Off the other paddle, and gas."

We comply, our finger lifting off the second paddle, and our foot rolling hard into the right pedal. In an instant, the engine roars to life, and the weight shifts to the rear wheels as they bite into the sticky pavement. As the Demon pulls our skeleton and the rest of our organs forward, our eyes and stomach seem to float in place for a moment. Eventually, they catch up, and we notice the whine of the 2.7-liter-per-rev supercharger, before the automatic transmission makes its first quick but jarring shift. Third gear arrives in another instant, and the car revs and shifts again with our right foot planted on the floor. We're still headed dead straight, we realize with relief as the eighth-mile marker approaches, the car shifting into fifth gear. We're off the gas, and we coast down the drag strip to our exit, chuckling to ourselves.

Once we realize we made it through our first pass intact, we begin to sweat again as our body decides it's safe to resume normal functions. We pull off the strip, roll down the windows, and head back to the staging area. We've got two more runs to go before we have to give up our seat to the next driver.

A second time, we roll up the windows, pull through the water box, spin our tires, and set up our run. A second time, our instructor walks us through the launch procedure. This time, a little more confident, we let go of the second paddle and dig into the accelerator, though not nearly as smoothly as our first launch. The rear wheels hop, but eventually bite and the Demon takes off. We're glad just to be headed straight as the dizzying G forces build and release, build and release as the car rows through its gears. 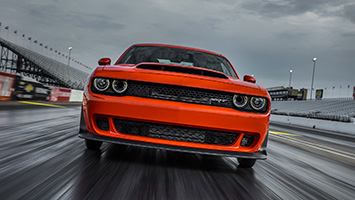 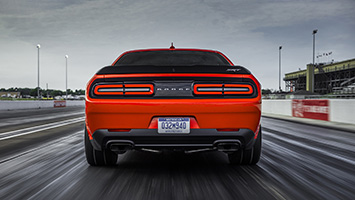 This time, we're already thinking about our next run even before we reach our marker. As we finish our run, we're telling our instructor about how that launch felt, excited about how well the Demon communicated its grip to us, and how the car was already telling us how to drive it better. Within minutes of hurtling down the drag strip as a terrified passenger before getting behind the wheel ourself – our first time on a proper drag strip, mind you – we're remembering the articles we had read damning the Dodge Demon as a car unfit for the road, and thinking them silly.

We're not afraid of the car anymore; perhaps we've come under the Demon's sinister spell. The fearsome beast, proclaimed by Dodge as "not domesticated," has lulled us into thinking it easily tamed.

More likely, the car is performing just as calmly as intended. Dodge made this car for the drag strip, and engineered it to go fast in a straight line. To take full advantage of the power on offer, the Demon's TransBrake holds the upgraded transmission's output shaft to send more torque to the rear wheels at launch. In Drag Mode, the suspension is tuned to shift more weight to the rear tires. Those tires are a set of grippy Nitto 315/40ZR18 drag radials created specifically for this car, and Dodge claims they provide 40-percent more launch force than the Hellcat tires. In order to survive the strains associated with the added power, the Demon has strengthened connecting rods and pistons, thicker rear half shafts, and improved materials in various components.

We pull through the water box ahead of our final run. We go through the somewhat cumbersome procedure to build brake pressure and spin the wheels, then set up our launch. Our instructor asks us if we want him to talk us through the steps again, or let us just do the paddle/brake/throttle sequence by memory, and we opt for the former. This time, it goes smoothly, and our timing is great. We nail the launch, getting into the throttle quickly without breaking grip on the rear wheels. The Demon surges forward, again leaving our stomach behind, but we're getting used to the feel of the longitudinal G forces and the roar of the exhaust. Our run isn't timed, but it certainly feels like the fastest of the three. Our instructor reinforces this feeling, telling us we've got the hang of the thing. We are officially partners with the Demon. 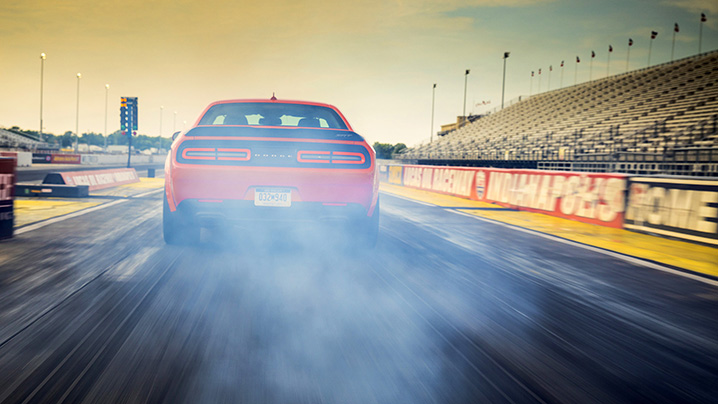 We coast toward the exit of the drag strip, sweaty and laughing. We roll down the windows and soak in the grumble of the exhaust, the smell of tire smoke lingering in the humid breeze as others take their turns on the track.

We know the Dodge Demon is an unusual street car, something that seems unnecessary. Some want us to think it's dangerous, even. Truth be told, our thinking changed dramatically last week at Lucas Oil Raceway. Granted, we were driving this car in a controlled environment, but we've driven cars that are much more unruly and potentially deadly when one puts their foot to the floor. Despite our fears as we sat inside the Demon for the first time, we didn't even experience a whiff of real danger. Without prior drag experience, we got behind the wheel of an absolute monster of a car, and came away completely intact, slightly smarter, slightly more experienced, and significantly happier than before.

And while it's potentially dangerous any time you put a human behind the wheel of a powerful car, Dodge has built something (and engineered it meticulously) to allow a small set of people who are passionate about a strange, standout vehicle to own something that will give them a certain type of performance – specifically straight-line performance – in a relatively safe factory vehicle. And with the Demon, Dodge has probably created a piece of automotive history. That's isn't just great for the automaker, it's a wonderful, exclusive experience for the few thousand passionate drivers who realize there's little to fear.