David Boldt
In certain ZIP codes around Dallas, Chevy's Suburban remains the Official SUV of Texas, but Infiniti's QX60 could be the Official Crossover. The Pathfinder-based three-row is everywhere. And while its popularity is based on transporting kids and their stuff, the QX60 is a more urban Suburban.

Mazda's CX-9 is not as ubiquitous as the QX60 in McMansion driveways, but it has been making inroads into the near-luxury segment with its near-luxury spec. The CX-9's second generation has obviously upscale intent, in the sheetmetal and throughout the top-line Signature interior. And the prices of these two cars are surprisingly close.

INFINITI QX60 AWD: The sheetmetal differentiating Infiniti's QX60 from its volume-oriented Nissan donor is attractive. The changes are subtle, and in profile the Pathfinder and Infiniti are almost identical, but the eye is drawn to the differences in the grille and D-pillar. The Infiniti has a luxury vibe with a more athletic stance. 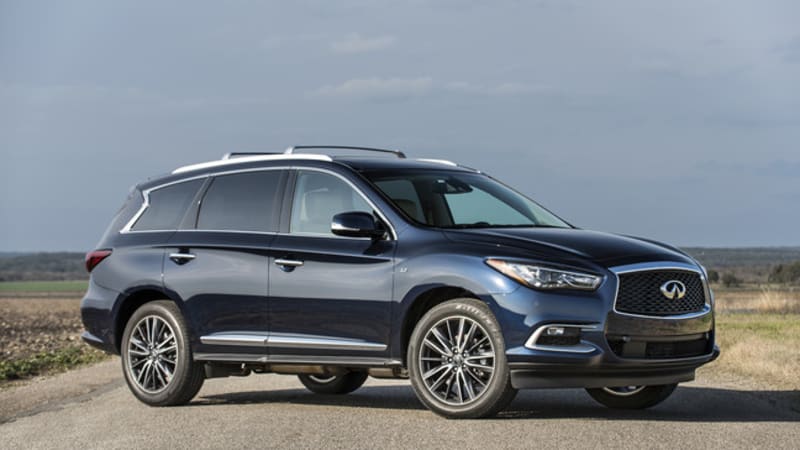 The QX60's interior surfaces seem upscale, but if you want wood it will cost you. In "building our own" and opting for graphite leather with maple trim, the wood requires another $12,000(!) of mandatory packages, including Infiniti's Premium and Premium Plus packages ($1,800 and $2,900, respectively) and $7,300 of Deluxe Tech. So, wood? We wouldn't. But if you do, know the QX60 won't match the larger QX80 in presence or passion, but it is certainly something beyond a rebadged Pathfinder.

For you and your passengers, there is 156 cubic feet of interior room; with the second and third rows folded, you can accommodate 76 cubic feet of cargo. Like in most crossovers, that third row is best used by young kids, but taking six adults to lunch won't require too much gymnastics – or chiropractics.

On the road, the QX60 is known more for comfort than composure; this isn't an old Buick, but neither is it a BMW. Nissan's 3.5 liter V6 produces generous power (295 horsepower and 270 pound-feet of torque), but it's transmitted to either the front wheels or all wheels via a CVT (continuously variable transmission). Nissan has tried to mitigate the quirkiness, but it's a CVT all the same.

MAZDA CX-9 SIGNATURE: This, ladies and gentlemen, is dramatic. Mazda has absolutely nailed it. Using Mazda's KODO design language on a large platform could have gone wrong. Instead, the design team has crafted a three-row crossover that is ageless. Within its 200 inches of overall length, there's not a line out of place, a graceful fusion of Asian expressiveness and Euro-centric minimalism. We'd liken it to Audi's Q8, except it's more visually interesting than the Q8.

Inside, pop for the top-of-the-line Signature and you'll enjoy upscale surfaces, Nappa leather and real rosewood trim (and won't spend $12,000 in options to secure it). There is less room than in the Infiniti, but interior volume and stowage are within 10 percent of the QX60. We've done a road trip in the Mazda and can say the third row is good for a couple of hours for an adult – but not much more.

The CX-9's driving dynamic is more precise than the QX60's. And while the horsepower from its 2.5 liter turbocharged four is lower – 250 (on premium, roughly 10 percent less on regular gas) versus the Infiniti's 295, the torque from the Mazda turbo four is 310 pound-feet versus the Infiniti's 270. And that power benefits from the CX-9's six-speed automatic vs. the QX60's CVT.

The top-of-the-line CX-9 Signature has no optional packages, and only a smattering of individual options. Base price of the Signature trim, with destination, is just over $45,000, while the Machine Grey metallic adds $300. In combination with the Mazda's Auburn Nappa leather, this is a well-equipped ride with an upscale vibe. Throw a Miata next to it and you have yourself a garage.

There isn't a bad choice here, and if leasing either one the monthly commitment is within a few dollars of the other. But if a $60K transaction makes you blush, the Mazda should probably get the nod.