View All Specs
UPDATE: The original version of this story called Mazda's range-topping CX-9 the Platinum. This is incorrect. The top-of-the-line model will be called the CX-9 Signature. The story has been edited accordingly.

When it comes to selling cars, getting customers into showrooms is half the battle. For Infiniti, one of its biggest draws is the QX60 – the three-row CUV originally known as the JX35, based on parent company Nissan's Pathfinder. QX60 buyers are young, female, and – most importantly – nine out of ten are new to the brand. The facelifted QX60, which was originally introduced in December, is here to maintain those stats.

That's important, especially now, as increasingly premium mainstream offerings are proliferating throughout the market. This isn't a new trend – GMC's Acadia Denali predates the JX35, for example – but now the QX60 has to contend with things like the Ford Explorer Platinum, Honda Pilot Elite, Dodge Durango Citadel, and the upcoming Mazda CX-9 Signature. These vehicles are similarly priced, and offer similar capabilities and accoutrements to the QX60.

Infiniti timed its QX60 update well, then, with a focus on aesthetics and maintaining the same driving dynamics. In the end, Infiniti offers a freshened CUV that should have no trouble keeping foot traffic flowing into the brand's showrooms.


A relaxed, isolated, and comfortable driving experience has been the QX60's calling card since it was introduced. Now, the CUV finally has the looks that image-conscious consumers so crave. But with prices starting at $45,395, and rapidly climbing north of $58,000 for our fully loaded test vehicle, the real question is whether Infiniti has gone far enough with this update to allow the QX60 to stand out against similarly equipped, but much more reasonably priced competitors. The Honda Pilot Elite is the most obvious threat, but Infiniti should keep an eye on how customers receive the new GMC Acadia Denali and Mazda CX-9 Signature.

We like the new look, and appreciate the improvements. Here's hoping they're enough to keep customers flowing into showrooms. 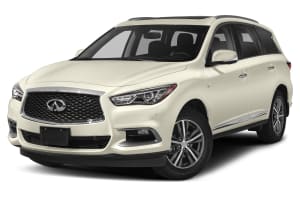