It may not be for everybody, but it’s refreshingly perfect for some.

View All Specs
Add a Review
Automotive enthusiasts tend to obsess over spec sheets. How else could we know which cars and trucks are the quickest in a straight line, hold the road with the greatest tenacity, or tow the biggest trailers? More succinctly, what ammunition would we have in the seemingly endless back-and-forth of Internet forums if it weren't for specifications?

Mazda's engineers think they've found a better way. The 2016 CX-9 has less horsepower than its primary competitors. The only engine available is a turbocharged four-cylinder, hooked to a six-speed automatic. Drivers won't miss the 23 horsepower (or more, as we'll soon explain) lost in the changeover from 2015 to 2016, because Mazda applied its holistic Skyactiv approach to the largest vehicle it offers. That means less weight and, ultimately, more fun. Or so they say.

Are they right? Yes. And no. Most of the time, in normal on-road driving conditions, the 2016 CX-9 is the most fun you can have with three rows. But the real-world tradeoff didn't go off completely without a hitch. 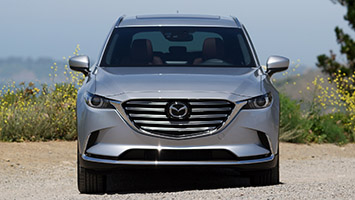 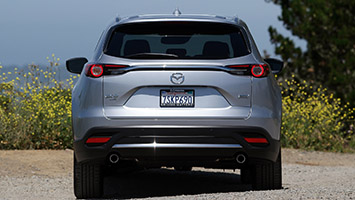 Reasoning that real-world performance is more important than ultimate horsepower, Mazda specified a four-cylinder for its big, three-row SUV instead of a more traditional V6. Let's get those all-important specifications out of the way: All 2016 Mazda CX-9s are fitted with a 2.5-liter turbocharged four-cylinder with 250 horsepower and, impressively, 310 pound-feet of torque at just 2,000 rpm. Unless you decide to use 87 octane, in which case you'll be limited to 227 horsepower. Mazda doesn't think owners will actually notice the difference in power levels, so there's no Premium Fuel Recommended sticker on the back of the fuel door.

Mazda utilized some clever turbo trickery to deliver a diesel-like torque curve from its gasoline-fueled engine, which makes the small-displacement powerplant feel lively at low engine speeds. The flipside is that the CX-9 runs out of breath as the needle swings across the upper reaches of the tach. While that simply wouldn't do for a sportscar like the MX-5, in the CX-9 it's not necessarily a deal breaker.

One benefit to the downsized engine is that it doesn't guzzle fuel. The EPA rates the CX-9 at 22 miles per gallon in the city and 28 on the highway. Drop one mpg all around for the all-wheel-drive model. Those figures beat out all the CX-9's most natural competitors, including the Honda Pilot and Toyota Highlander. The turbo-four Ford Explorer matches the 28-mpg highway figure, but loses by three in the city. 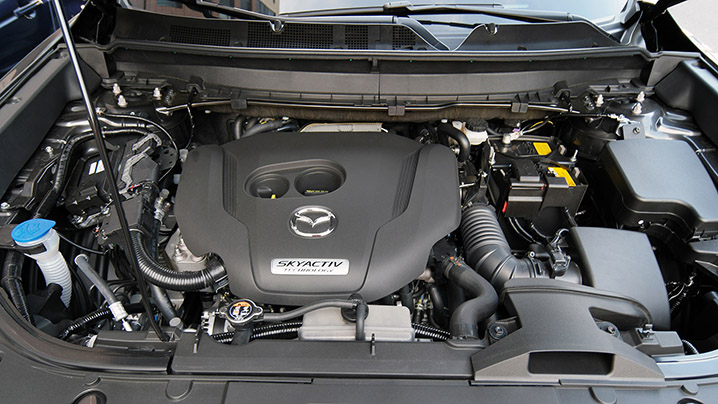 We couldn't accurately gauge fuel mileage during our short stint behind the wheel, but Mazda promises class-leading efficiency for actual owners on actual roads. It's all part of vehicle development engineer Dave Coleman's stated goal of "ignoring competitive specs and focusing on the real world." Based on the inherent goodness of Mazda's previous Skyactiv efforts, we have a feeling that's more than just marketing bluster.

We can say for certain that the CX-9 beats its rivals when it comes to ride and handling. Mazda's three-row crossover rides seriously smooth, even on broken pavement. It's also quiet, thanks to thicker floorpan steel and an extra 53 pounds of sound deadening material compared to the previous CX-9. Still, the 2016 model is about 260 pounds lighter than the 2015.

The benefit to the weight loss routine is best felt behind the wheel on a twisty road. We wound up and down Highway 1 north of San Francisco for a few hours, and found the CX-9 to be a satisfying partner. As long as you don't drive like you're in a Miata, the CX-9 feels calmer and more comfortable than a vehicle its size has any right to. Steering is light at low speeds, but firms up nicely once you really get moving. The transmission goes mostly unnoticed, which is one of the nicest things you can say about an automatic in a family car. Sport mode immediately drops a cog and downshifts further with a slight touch of the accelerator. 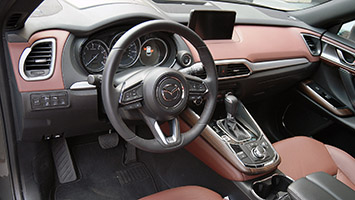 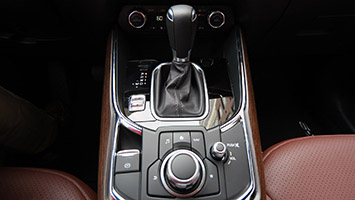 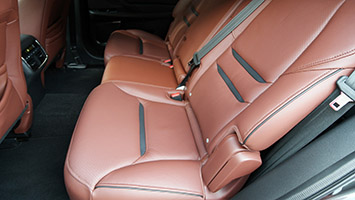 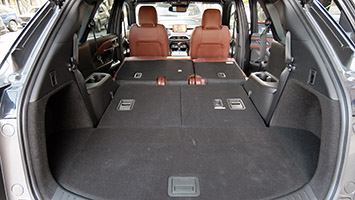 The 2016 CX-9 is roomy. With the seat positioned for a six-foot driver, there's enough room for an equally tall passenger in the second row. Even better, that same fullsize person can fit in the third row without embedding their legs in the seatback ahead or their hair grazing the headliner above. On the downside, the actual seating position in the way back isn't very comfortable – tall occupants better get used to having their knees at chest height.

The only real way to make the CX-9's third row more comfortable for adults would be to make the vehicle larger, and that's antithetical to Mazda's goal of making its 'ute as practical as possible in the real world. After all, it's not often that all seven seats will be filled (especially by adults). Plus, the CX-9's sleek looks would be ruined with theater-style tiered seats.

It's not easy to make a seven-passenger box on wheels look alluring. Mazda has done a pretty good job in that regard. There are plenty of angles and surfacing in the car's bodysides to catch the light and engage the eyes, and Mazda's signature oversized five-point grille fits more appropriately on the CX-9 than any of its siblings. The chrome wings that extend from the top of the grille into the headlights are a nice visual touch, as are the taillights with their pseudo eyeball and eyelash design. 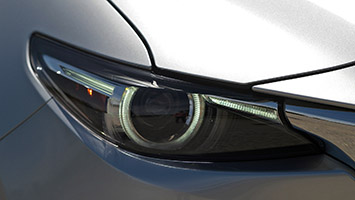 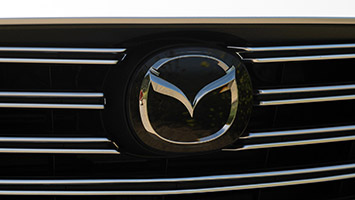 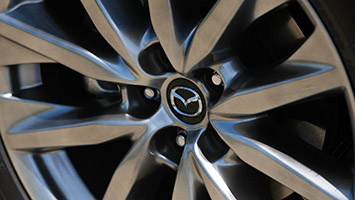 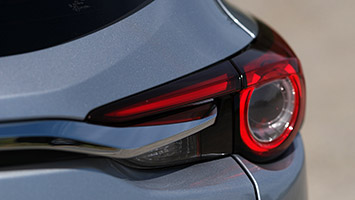 From the driver's seat, every critical gauge and display sits directly in the driver's field of view. Buttons and switchgear are within easy reach, lending to ergonomics that feel just right. The LCD display in the center stack is touch sensitive, but Mazda's familiar click-wheel and buttons on the center console perform the same inputs and are just as easy to master. On top-level Signature models details like the sculptural door pulls play well with the genuine aluminum and Japanese Rosewood trim pieces to lend a luxurious feel to the cabin.

There's 14.4 cubic feet of space behind the third row, and as many as 71.2 cubes with all the seats folded, and fortunately the space is flat. That's less than the Highlander or Pilot, both of which boast more than 83 cubic feet. The Ford Explorer and brand-new 2017 GMC Acadia split the difference with around 80 cubic feet each.

If you're the type likely to fill a crossover to the brim with people and cargo, the CX-9 probably isn't your best bet. It's a 4,300-pound vehicle with just 227 horsepower (on 87 octane, at least). In part-throttle situations and typical around-town speeds, the CX-9's turbo four feels adequate, and mostly like a larger powerplant. When push comes to shove, though, we'd prefer more horsepower, especially when merging onto the highway with a full load of passengers and cargo. And if you want to tow more than a small trailer, you're going to need to look elsewhere. The 2016 CX-9's worst-in-class max rating of 3,500 pounds limits your options. 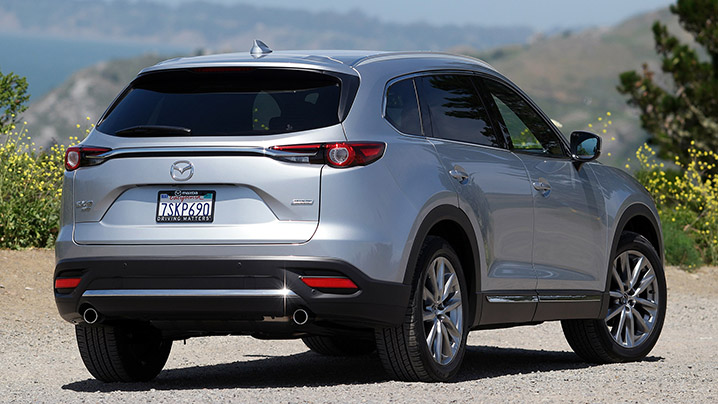 Base 2016 CX-9s retail for $32,420, which is a few thousand dollars more expensive than the Explorer, Pilot, and Highlander. The previously top-level Grand Touring model starts at $41,070 (add $1,800 for all-wheel drive), and the new Signature trim level lists for $44,915 with standard all-wheel drive. That's pretty much on par with Toyota's Limited Platinum grade, but undercuts Honda's Elite trim and is even further from Ford's $53,665 Explorer Platinum.

Mazda's effort to throw out the spec sheet and design a large crossover that excels in the real world is laudable. And it mostly works, as long as you don't stray too far outside its baked-in capabilities. The 2016 Mazda CX-9 is a crossover that's built not for passengers, but for drivers; for people who need a utility vehicle but aren't ready to give up the notion driving should be fun. And that's an idea we can get behind. 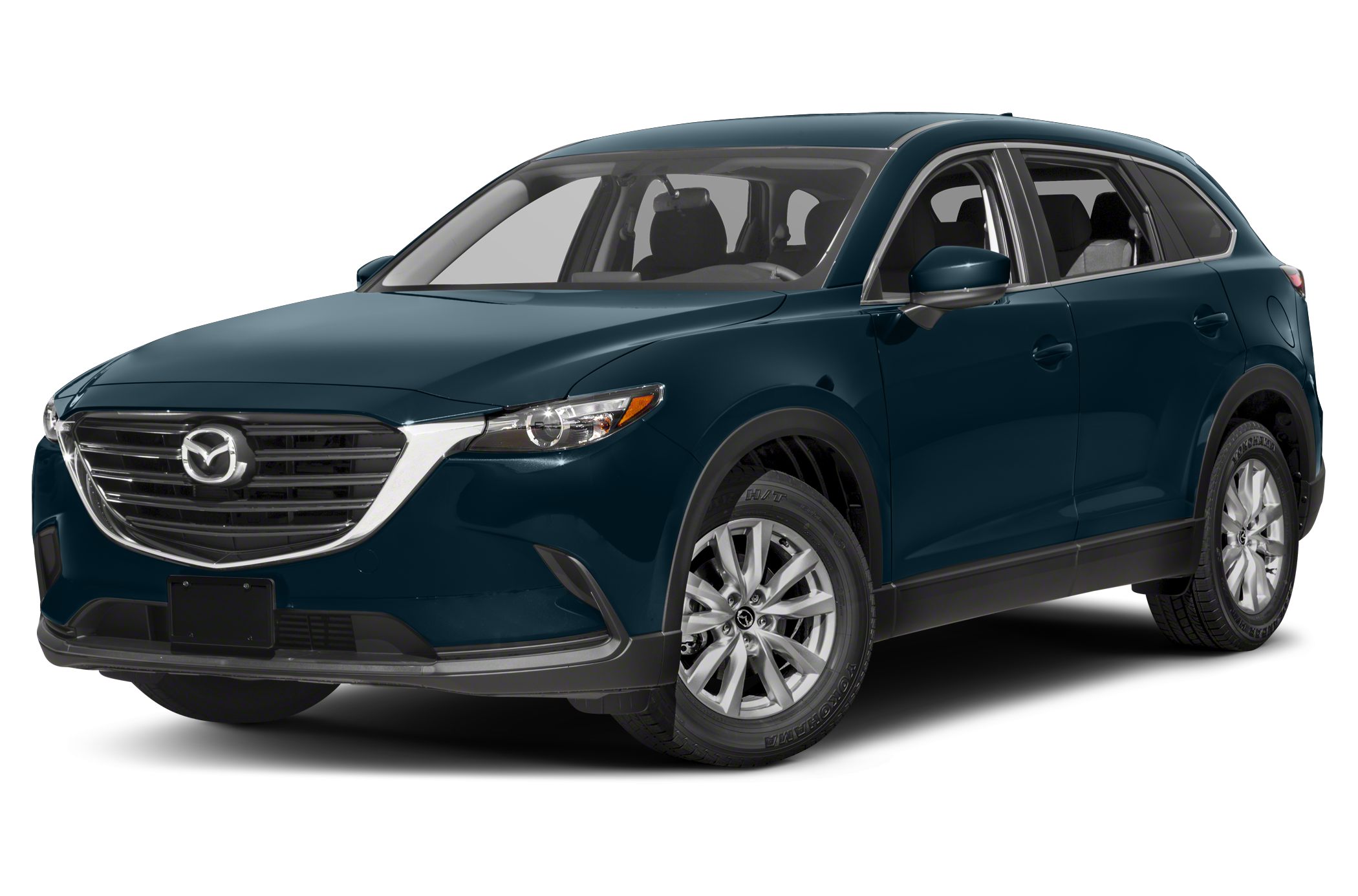