Joel Stocksdale
Have you ever watched a Fast and Furious movie and thought to yourself, "Man, it would be so cool if I could race alongside Dom and Letty?" Well, Anki is adding a new starter kit to its Anki Overdrive remote-control racing line that will let you do just that. It's just on a smaller scale and without the massive property damage.

In case you're unfamiliar with Anki Overdrive toys, imagine a cross between slot cars and Mario Kart. The starter kit comes with a variety of track pieces for the cars to race on, and the cars themselves are endowed with artificial intelligence (AI) that keeps them on the track. The cars can be controlled by a person via a free Anki Overdrive phone app, or driven by the on-board AI. This means that you can race friends and family, or race solo against the computer. The Mario Kart part comes in the form of various upgrades and weapons used to defeat opponents. However, they don't actually create explosions like the concept art below, they just temporarily affect the opponent car. The app also includes different computer opponents, race modes, and more. 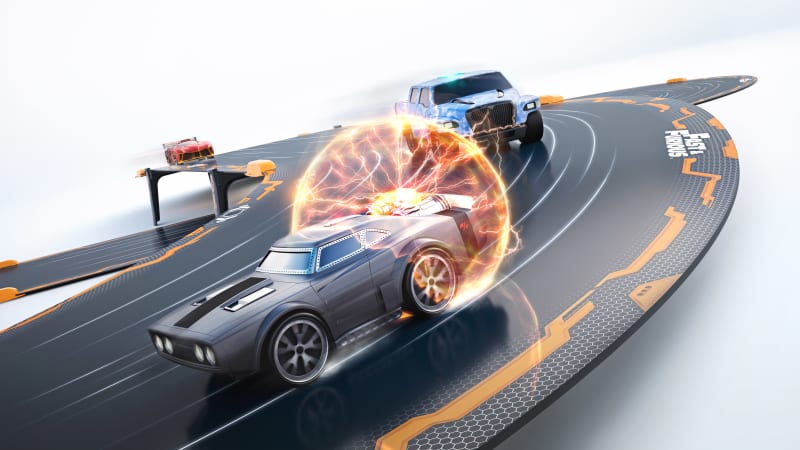 The Fast and Furious starter kit the company is releasing this September adds two somewhat real-world (let's face it, there isn't much real in the Fast and Furious series) cars to race: the Dodge Charger driven by Dom Toretto, and the International MXT driven by Hobbs. The cars have new upgrades and weapons, and the updated app includes Dom, Hobbs, Letty, and Tej as characters with which to race. The kit also includes 10 pieces of a track, a charging platform, guardrails, and a couple of risers. An exclusive "Power Zone" track piece is also included that blasts opponent cars when driven across. People that pre-order the kit will get a jump section included for free. Everything in the new set is also compatible with existing Anki Overdrive cars, and the set itself costs $169.99.