Toyota Concept-i looks weird, will be fun to drive, and comes with a Disneyfied AI

Say hello to Yui, no relation to Huey and Lewey.

Brett Berk
Toyota's new concept car has a mind of its own. Just unveiled at the Consumer Electronics Show (CES) in Las Vegas, the gloss white, four seat, bluntly ovoid, fractally embellished, occasionally autonomous pod, known as the Concept-i, comes equipped with an artificially intelligent user experience interface known as Yui that will apparently get to know you, your emotions, and your preferences, and react accordingly.

"Basically, this is our futuristic vision of what driving a Toyota means in the year 2030," says Ian Cartabiano, the veteran studio chief for the brand's CALTY advanced design atelier in southern California. "The challenging aspect of it was, how do we make this futuristic car convey something that's still fun to drive, but also have a new way to interact between driver and car, and basically, reignite a love for cars." Their solution? "A proposal for the future that incorporates technology with a soul. We don't want to make a cold, technical, dry, soulless machine."

This is intriguing, especially coming from Toyota, a brand that has basically staked its entire reputation on making cold, technical, dry, soulless machines. Then again, anything's possible. The future is ephemeral and unpredictable, and our prognostications about it are often far more interesting, and far less insidious, than the ensuing reality. We've always thought that the best cars have a kind of mechanized spirit, so we're intrigued by this incipient human/machine meld. If also terrified of it. Yui, like all of the best and worst agents of artificial intelligence exemplified in a century of science fiction, is at once localized and ubiquitous. "In order for Yui to communicate with you or other passengers in the car, or to the outside, we needed it to move around the cabin, and needed it to go outside the cabin," Cartabiano says.

When you first enter the car, you meet Yui as a pulsing circle on the center console; it raises up to meet your hand, as if you start the car the way you seal a deal with the devil: with a handshake. Yui then moves around the Concept i's interior at whim, appearing on integrated, but subtly hidden, interfaces. It flash-zooms onto the dash and instrument panel like a comet and populates the screens there. It zips in panels built into the doors to call your attention to nearby obstacles. It moves to message boards on the exterior flanks to communicate with other cars and pedestrians. It provides text and warnings ("Watch Out!!!" "Turning Left") via OLED displays on the front and rear bumpers. And it will live in your smart-phone, or whatever accessory or implant acts as its surrogate in 2030. 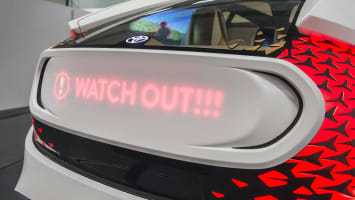 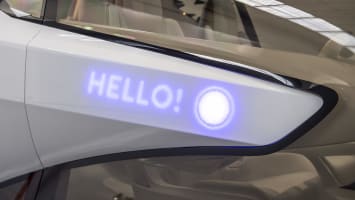 One of the key challenges in making Yui accessible and approachable was in designing its appearance and behavior. Cartabiano and his team tried numerous options before settling. "We did form studies, we thought about three-dimensional graphics, holograms," he says. But what they ended up with was deceptively simple and low-fi: a two-dimensional ring with a circle inside it. "Basically, the outer ring is like the body, and the inner circle is the soul," Cartabiano says.

Using the Twelve Principles of Animation—a series of guidelines developed by Disney artists in the Thirties to help make inanimate objects appear alive—they populated Yui with manners and motions that will help it convey feelings and emotion—pulsing, stretching, shrinking, overlapping—allowing Yui to communicate with its human subjects in a variety of ways. Visual cues, eye command, voice command, and touch command are also integrated, allowing for multivalent forms of interaction. And interfaces appear and disappear, or morph and change, situationally.

For example, the headlamps are beneath the paint, so when the car is off and you're not present, they're invisible, but as you approach they open up like eyes. They can even wink at you, if you're the kind of person that requires flattery from inanimate objects. The door panel display is similarly invisible, but can "speak" to you, providing messages like Hello, Welcome Back, Goodbye. And there are two distinct light signatures for the interior of the car, purple to signify that it's in self-driving mode and green for manual driving mode, alerting the world around the car to who or what is/isn't behind the wheel.

This adaptability is present in part to add a sense delight—long a key factor in creating a bond between humans and their vehicles. But it also rooted in a venerable Japanese principle. "It's called Omotenashi," Cartabiano explains. "It's a way of saying 'contextual information.' It's basically hospitality at the right time, when you need it, in the right amount, served in a beautiful way. And when you're done, it disappears."

The car's exterior design was based around a similar receding fluidity. Cartabiano describes its guiding principle as, Kinetic Warmth. "It's very easy to draw a smart-phone on wheels, something that's cold and aluminum and gloss black, and it has red eyes. We wanted to stay away from that," Cartabiano says. "For this concept, every surface is moving, but it all has a connected line quality." He mentions the modern architect Eero Saarinen as inspiration. "He was a Modernist, but the feeling of movement he applied in buildings like the TWA Terminal at JFK, we really wanted to apply to this car. Something warm not cold, something inviting, not sterile."

"That was one of our big topics of discussion at the very beginning of this project," Cartabiano says. "Don't we have information overload right now? We wanted to do the opposite. We wanted to plant this flag at CES and say, our vision of the future is intriguing, warm, simple, and universal."

We are torn between hoping he is right, and knowing he is wrong. But the future is evanescent. It eludes all of us.
X