Minivans could be key to Google-FCA self-driving partnership

Pete Bigelow
Executives from Google and Fiat Chrysler Automobiles have held discussions about creating a technical partnership, the purpose of which would be to further development of self-driving vehicles, according to multiple reports.

The two companies might make ideal partners. Google has been at the forefront of developing autonomous technology, and has publicly stated it'd seek partners to build vehicles. FCA, meanwhile, has not invested in self-driving research, and its CEO has been publicly offering the company up for acquisition for the last several years.

Combined, they could make both the brains and the bodies of self-driving cars.

"A Google-FCA tie-up could simultaneously put both companies in the lead in this critical race," said Kelley Blue Book senior analyst Karl Brauer. "... FCA's efforts to merge with another automaker have failed, but if the automaker can join forces with Google, it could immediately change the dynamic. Every car company is trying to get into the tech space right now, because they all know their future depends on it."

A Google spokesperson declined comment on the reports Thursday, and FCA did not return a request for comment. But Chris Urmson, director of Google's self-driving car project, may have inadvertently hinted at the partnership Wednesday when he detailed an interest in building autonomous minivans for public-transportation use.

"Public transit executives could be buying autonomous minivans rather than expensive buses," Urmson said during a public meeting on autonomous regulations held by the National Highway Traffic Safety Administration in Palo Alto, California. "Federal standards determine what kinds of vehicles cities can use for transit. This needs attention."

Minivans are different than the Lexus 450h and pod-like prototypes Google has used for autonomous testing so far. If Urmson is indeed interested in self-driving minivans that provide on-demand services for public transportation users, as he elaborated upon, there may be no more perfect partner than Chrysler, which pioneered the minivan segment three decades ago and recently reasserted its presence the minivan market with the new Pacifica, a completely redesigned vehicle.

Ridding the urban environment of traffic-clogging buses might be one small slice of Google's broader plan for transforming cities and the imprint cars make upon them. Another Google push that Urmson, pictured below, detailed Wednesday: a need to help cities find a way to reclaim land currently used for parking spaces and transform them into something more beneficial during the autonomous era. 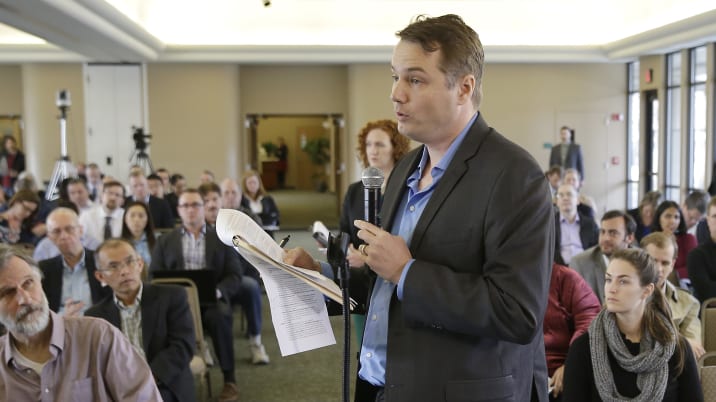 Urmson warned that American cities would be "stuck in a quagmire" unless regulators find a way to overcome a mountain of conflicting and potentially outdated laws and regulations that may hinder the deployment of self-driving cars.

Speaking to detractors in the audience who believe the government must continue to mandate that cars are built with controls for human input, like steering wheels and brakes, Urmson countered that autonomous technology could help eliminate many of the more than-33,000 deaths that occur on US roads every year.

Reports of the Chrysler-Google partnership come only two days after Google entered another partnership, this one with Ford, Volvo, Uber and Lyft. Those five companies created a new alliance, the Self-Driving Coalition for Safer Streets, that will lobby federal and state lawmakers to accelerate new policies that clear the path toward fully autonomous vehicles on public roads.