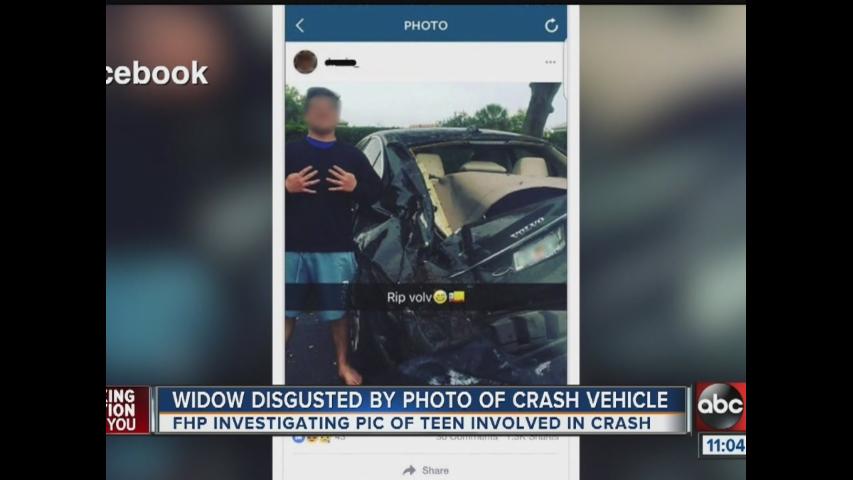 The Florida Highway Patrol is investigating a photo showing a teenager involved in a fatal hit-and-run posing in front of the damaged car involved in the crash. WFTS posted the photo on April 1 which shows the teen standing in front of a mangled black Volvo throwing gang signs and smiling. The caption on the photo reads "RIP Volvo", and also included a crying smiley face emoji and a semi-truck emoji.

The sixteen year old in the picture, and his fifteen year old brother, were involved in a deadly crash at the end of March. While traveling on I-75 near Sarasota their Volvo was rear-ended by a fuel tanker driven by Robert Drewelus. The tanker, which was carrying 8,500 gallons of gasoline, ran off the road after striking the Volvo and burst into flames. The fifteen year old driver, who was driving on a learners permit, fled the scene in the stricken Volvo after the accident. Hours after the crash, the FHP found the car at an apartment complex and the driver was arrested shortly thereafter for felony leaving the scene of a crash involving death and violating the conditions of his learners permit.

The photo, which quickly went viral, has only added to the suffering of Elsie Nieves-Drewelus, Robert Drewelus' widow.

"I'm infuriated, I'm disgusted by it," said Nieves-Drewelus. "I am angry cause (sic) meanwhile they are posting pictures on social media thinking it's funny, my husband, what was left of him, is being cremated."

"They took off," Nieves-Drewelus continued. "They didn't have the decency to at least pull over and call 911. At least I would have known that they made some kind of effort. No. They just left him like you leave an animal on the side of the road which was not fair."

The teen driver, whose name is being withheld due to his status as a minor, refused to make a comment to the media.
X