Any future Mitsubishi plug-in will likely be a CUV. Any day now, American plug-in vehicle shoppers will be able to actually buy a plug-in hybrid SUV. Europeans and Japanese buyers have had this option for many years, since the Mitsubishi Outlander PHEV went on sale in those markets in 2013. There have been plenty of diversions in the route that is bringing the big PHEV to our shores, but it's looking like, "late summer, early fall," is when thing will for real happen.


10-20 percent of total Outlander sales would be "a very good number."

That's the message from Don Swearingen, executive vice president of Mitsubishi Motors North America (MMNA), who we spoke to at the New York Auto Show where the PHEV made its debut appearance. Swearingen said that the dealers are as ready as the customers. "As we talked to our dealer council, they are all very interested in this product," he said. "[Range anxiety was] eliminated with this vehicle, and because of that, I think we are going to have some pretty good response." Swearingen didn't put a specific number to that claim, but said that 10-20 percent of total Outlander sales (which currently sit at around 2,000 a month) would be "a very good number." Previously, Mitsubishi representatives said they expected to sell 4,000 PHEV units in the first year.

As we've documented over the years, there were a number of reasons for why the US didn't get the first batch of Outlander PHEVs. One of the big ones was that the PHEV was selling like gangbusters elsewhere. It's the best-selling PHEV in all of Europe, for example, and was the fourth-best-selling plug-in vehicle anywhere in February 2016. And Mitsubishi just couldn't make enough of them. Swearingen said the main bottleneck for this was the battery pack supplier Lithium Energy Japan, which didn't have the capacity to make more than it did. So, instead of leaving three markets without enough supply, Mitsubishi decided to leave one in the lurch and focus on the other two. Plus, since the Outlander PHEV will be based on the 2017 gas-powered Outlander, it will come with numerous safety enhancements as well as the 100+ improvements that the 2016 Outlander got compared to the 2015. In other words, all the pieces are all coming together.


The Outlander PHEV is "the best of both worlds." - Francine Harsini

At least, that's what Francine Harsini, MMNA's senior director of marketing, said. The final important part are the customers, and Harsini said that Mitsubishi will be a big national marketing push. The general theme? That the Outlander PHEV has it all. It's eco-minded, it's got lots of room and there's no range anxiety. It's "the best of both worlds," she said. "The fact that you get that five-seater, the fact that you get the cargo capacity, the SUV feel, along with the fact that you get to go anywhere with the gasoline feature of the car. It could be that on the weekends you use the car more for gas purposes, but during the week you might have a short enough commute too that you are able to just plug-in at home and at work. It's a benefit and a win-win." 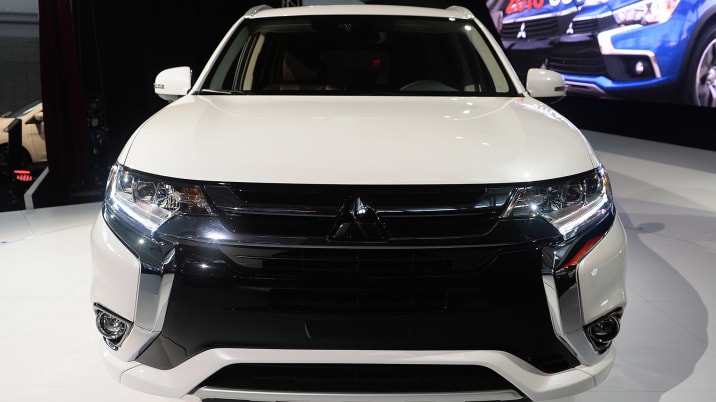 Harsini said that she expects the Outlander to appeal to more than just the pure plug-in crowd. According to her focus groups, she said, "This type of consumer is different. They don't just want the EV aspect, right? It makes them feel good about what they're undertaking in terms of their environmental contribution, but it's above and beyond that. It's somebody who doesn't want the range anxiety, who does want the benefit that if they do need the capacity of a gasoline-powered engine they have that. A little more of a mass audience than just the pure EV buyer."


"The new plug-in consumer doesn't even know the right questions to ask."

And that poses a bit of a problem. EV shoppers often know more about the cars than any salesman does, Harsini said, but to reach beyond that crowd, Mitsubishi will have to educate its dealers as well as drive people to the Outlander PHEV website to learn about the car. Any dealer in the US will be able to offer the car, but they will have to get EV certified by Mitsubishi. Anyone who already sells the i-MiEV is already certified, and Swearingen said he suspects the Outlander PHEV will really increase the number of interested dealers. Part of the certification process is to get dealers to have vehicle chargers as well as salespeople who can help a shopper recognize if the PHEV or regular Outlander is the right vehicle, using things like a a PHEV calculator on the website. "The new consumer doesn't even know the right questions to ask," Harsini said. "So we have to have the ability to help them through that process. That's a big piece." Dealers will not be incentivized to push one over the other, Swearingen said.

Another big piece, of course, will be the price, which we can expect about three months before launch. Swearingen did say that the Outlander PHEV should qualify for a federal tax rebate of around $5,800, based on the battery size. [This doesn't quite match up with what we've heard, which is that the Outlander has a 12-kWh pack. A 12-kWh pack would only qualify for $5,419 in rebates.] "We're putting that all into our calculation to make sure that we have a product that's affordable," Swearingen said. "We're trying to get it as close to the combustion engine as possible, understanding that we're adding on some additional safety features on this vehicle."

Until the Outlander PHEV arrives, Mitsubishi will still be selling the i-MiEV all-electric car. That EV will stick around at least through the 2017 model year, Swearingen said, as was always the plan. After that, if Mitsubishi decides to offer another plug-in, "our focus will be on the CUV segments," Swearingen said.