Erin Marquis
A few truck drivers were stranded on a snowy freeway in Rochester, New York, Tuesday. Luckily, they had help from a comparatively 'little' truck. Tuesday afternoon's commute turned into a nightmare as a snowstorm dumped over a foot of the white stuff on area roads. Tractor trailers and cars littered parts of the 490 freeway unable to gain traction. Emergency vehicles had a hard time making it out to injured drivers. Things seemed to be going from bad to worse, but then a good Samaritan with some serious hauling power began to assist in the clean up.

Chris Johnson was heading home after working the graveyard shift when he came to the messy stretch of freeway, TWCNews reported. Stranded vehicles were impeding snow plows and emergency crews that were struggling to get to crash victims. Johnson knew there was only one thing to do with his Ford Super Duty.

"They needed the plows to get through so I kept pulling people out of the way," said Johnson. He didn't stop at just one semi truck however. He helped pull several tractor trailers out of the snow. When asked how his pickup was capable of hauling the huge vehicles he answered with pride, "It's a Ford." This kind of gumption from a simple Ford pickup truck isn't unheard of. During a huge snow storm last year in Chicago, a Ford F-150 helped haul a semi truck through snow-choked streets. 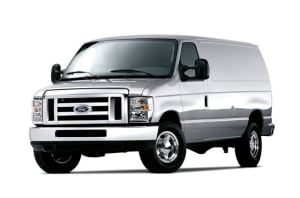