Mazda to relocate its US offices into Irvine's tallest building

Noah Joseph
Mazda is the latest foreign automaker to be moving its North American headquarters. Only this time, it's not moving further south. Instead, the Japanese automaker is simply relocating to another facility in Irvine, CA. 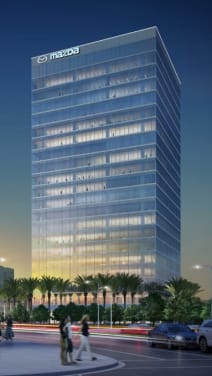 In a little over a year from now, Mazda North American Operations will move to 200 Spectrum Center Drive (pictured in the rendering at right), taking up five of the 21 floors in Orange County's tallest building for a total of over 100,000 square feet of office space. It'll also take up half the lobby with vehicles on display and the exclusive naming rights on the top of the building. The facility, designed by Pei Cobb Freed & Partners, boasts full glass walls from floor to ten-foot ceiling for uninterrupted 360-degree views.

Mazda has been in its current US headquarters at 7755 Irvine Center Drive (pictured above) since 1987. The five-story building was specifically constructed for the purpose and was the tallest in Irvine at the time. Prior to that it was based in Compton from 1970. The move to the new facility is scheduled to take place in February, 2017.

Mazda's announcement marks only the most recent of foreign automakers to relocate their North American headquarters. Toyota is moving to Texas, Subaru to Camden, Lotus to Ann Arbor, Daimler to Farmington Hills, and Mercedes-Benz to Atlanta (where Porsche recently relocated, as well). Cadillac also recently moved from GM's Renaissance Center in downtown Detroit to its new headquarters in New York.

Hyundai and Kia also quarter their North American operations in Irvine, as does Aston Martin. Meanwhile Honda and Toyota (for the time being) are based less than an hour away in Torrance, and Mitsubishi halfway in between in Cypress. Though they no longer sell passenger cars in North America, Isuzu and Suzuki still operate their US bases in SoCal as well, in Anaheim and Brea, respectively – all municipalities located just south of Los Angeles. Nissan and Subaru also base their US operations outside of California, with head offices in Tennessee and New Jersey, respectively.

IRVINE, Calif., Jan. 11, 2016 /PRNewswire/ -- Mazda North American Operations (MNAO) has spent the last three years bringing all-new, upscale vehicles to the U.S. and earning outstanding critical acclaim in the process. Now, MNAO has shifted its focus to improving the employee workplace environment and expanding its facility to accommodate continued growth and prosperity. Effective February, 2017 MNAO will continue its 30-year residency in Irvine, Calif. as it looks to move to an all-new state-of-the-art facility at 200 Spectrum Center Drive, as a result of a 10-year lease announced today.

"It is one thing to build outstanding vehicles, but the people who work for Mazda must also feel that their workspace is as good as the cars we build," said Masahiro Moro, president and CEO, MNAO. "Continued improvement of the work environment will lead to a better experience for our customers, and that is our ultimate goal."

Mazda will occupy five floors of the 21-floor building, totaling 102,000 square feet, with exclusive naming rights on the top of the building. Additionally, Mazda will occupy half of the lobby, with vehicle displays allowing for a premium first impression. The all-new building will allow for a mobile, flexible and technologically advanced work environment for its employees.

Officially the tallest building in Orange County, the 21-story vertical campus, owned by Irvine Company, was designed by world-renowned architect Pei Cobb Freed & Partners, encompassing a total of 426,000 square-feet. It features sleek, modern architecture with unobscured 360-degree views. Every floor is graced with 10-foot floor-to-ceiling glass allowing abundant natural light, unobstructed views of the outside, and an efficient floor plan for maximum flexibility and growth. 200 Spectrum Center was awarded "Designed to Earn the ENERGY STAR" recognition in 2015 and is expected to earn a Leadership in Energy & Environmental Design (LEED) Gold Certification upon completion.

Mazda became the occupant of its current location at 7755 Irvine Center Drive in October of 1987. The current building was constructed specifically for Mazda in a then-developing city named Irvine, and the five-story building would end up being the first high rise development in the city. Mazda relocated to Irvine from Compton, Calif. where it first established its North American headquarters in 1970.
X