We Whir Around San Francisco In Renault-Nissan's Tiny EV Wonder

Halfway up Laguna Street, the panic set in. I might not make it up this hill. With my foot depressed all the way to the floor, I sucked in my stomach and started to pray. Yet again, I found myself in an unconventional way to get around on four wheels – but this time, I was on my own, and behind the wheel.

Meet the Scoot Quad, aka Nissan New Mobility Concept, aka Renault Twizy. The many aliases reflect the path of descent from its development as a quirky French electric vehicle to its proliferation as a model for car sharing. The Quad resides in San Francisco as part of the Scoot fleet of shared electric vehicles and it's most certainly not for sale. As the line blurs between those who share cars for personal reasons and those who use them for business purposes, Scoot and Nissan came to an agreement in which a small number of New Mobility Concepts would join the Scoot fleet – which currently includes over 300 motorbikes. The added value of Scoot is the capacity for one-way rentals around the city, as well as a dedicated network of charging stations.

"We think it's just the best way to get around the city for everyone," said Scoot fleet vice president Mike Waltman, explaining how 10 New Mobility Concepts made their way to San Francisco. 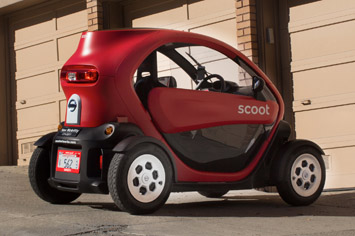 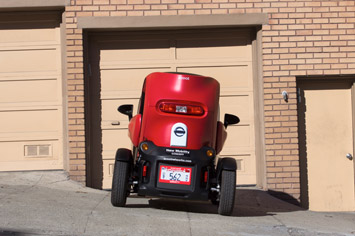 Charging time is about four hours on a Level Two charger, made possible through Scoot's network of stations around the city.

The one-plus-one Twizy has been in production since 2012 and on sale in certain overseas markets, but it's entirely new for the United States, and it wears the Nissan badge here – kind of. No major changes were made to the Twizy when it became the New Mobility Concept, and similarly none were made in its "transformation" to the Quad. It sports the same insectile shape and the rear profile of a top hat, as well as an identical powertrain: a 13-kilowatt motor that produces 17 horsepower, routed to the rear wheels through a single-speed automatic transmission. Charging time is about four hours on a Level Two charger, made possible through Scoot's network of stations around the city. Its top speed is 50 miles per hour, but Nissan installed a governor at 25 mph to conform to US low-speed vehicle requirements.

New Scoot members are required to successfully pass an exam before beginning to use the service, so that was my first order of business. After spending about 35 minutes going through a series of informational videos on the Scoot app, as any new member would do, I was ready to ride Scoot motorcycles. Another 20 minutes or so of easier-to-understand videos prepared me to be a Scoot Quad driver. Think of it as a refresher to driver's ed with far less severe consequences. 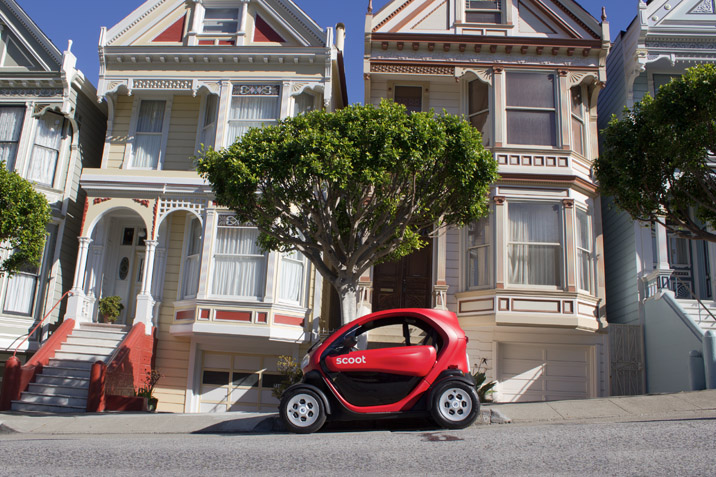 The Quad does without power steering but is remarkably agile, and it has an impressive turning circle.

I walked outside to the red and black Quad that I had been eyeing since arriving at Scoot's headquarters in the bustling neighborhood south of Market Street. Perhaps in a nod to a Silicon Valley meme, Waltman demonstrated the motion of the Quad's scissor-style doors before I began to wedge myself in. This is no Smart Fortwo, which boasts a teeny-tiny footprint with the space of a compact car inside. What you see in a Quad is what you get. The instruments and driving position in the Quad are centered due in part to the narrow, Economy Plus width of the driver's seat. Hard plastic covers just about everything, and a Scoot lightning bolt obscures the Renault logo on the Quad's steering wheel. A speedometer and charge-level indicator are about the only gauges on a relatively small digital readout. Unique to the Quad fleet is a windshield mount that charges and holds a smartphone, enabling users to bring their own GPS.

I closed the doors and started down a narrow, one-lane street that eventually connected with a major thoroughfare. First impressions of the drive experience were not exactly reassuring. What have I gotten myself into? Despite lacking true windows, the Quad is a paradox of claustrophobia. It does away with the stereotype that all EVs are fun to drive because of ample torque off the line. Laden with only a driver, the Quad takes its time to reach city driving speed. Crossing several lanes of traffic requires a predetermined path and a gumptious attitude. Mashing the accelerator is a preferred method of remaining alive while driving. The Quad does without power steering but is remarkably agile, and it has an impressive turning circle. Its agility is also admirable, due in part to exposed wheels and tires that define the Quad's corners. Again, the Quad is no Ariel Atom, but how many other vehicles on the road today are so styled? 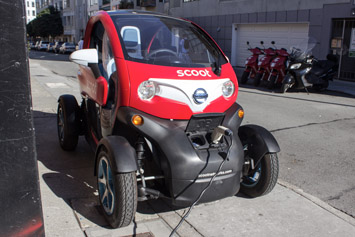 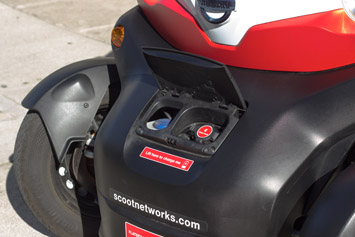 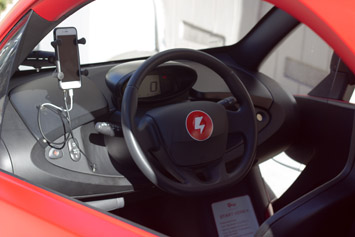 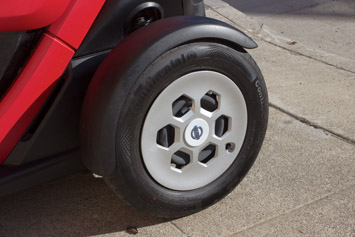 Downhill stretches are a cinch for the Quad, and useful for recapturing energy using the light-strength regenerative brakes.

The Quad's stalk-mounted horn quickly becomes an essential tool for letting fullsize cars know that you exist. Despite their small size and muscle, Quads are prohibited from using San Francisco's bike lanes – as they also are from leaving the city limits, per Scoot's rules. Routes of varying elevation are inevitable in San Francisco, and they test the Quad's range and capabilities. Downhill stretches are a cinch for the Quad, and useful for recapturing energy using the light-strength regenerative brakes. Uphills are another thing entirely. If hitting the accelerator hard is the Quad driver's standard operating practice, then gluing a foot to the pedal is the only way to get up a hill. Too many climbs adversely affect the Quad's range, as you might expect, and it's difficult to discern the actual amount of range remaining. En route to grab coffee in Russian Hill, I lost somewhere between four and seven miles of range, despite traveling only a mile or so.

There is some joy, however, in driving the Quad on busy city streets: parking. I pulled up to a space outside a coffee shop in Russian Hill and found there was room for another Quad to join behind me. Had we parked perpendicular to the curb, which isn't technically legal yet, we could have squeezed at least one more in to the spot. A friend who works nearby came outside to check it out and take a short ride back to the office. I told her to jump in back. 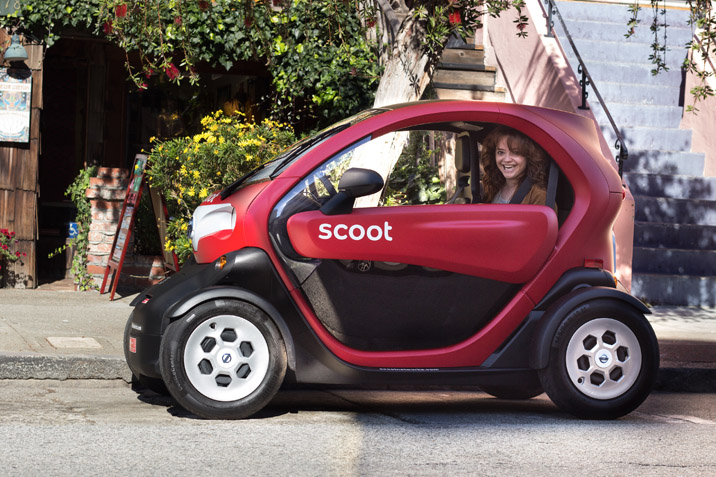 Its top speed is 50 miles per hour, but Nissan installed a governor at 25 mph to conform to US low-speed vehicle requirements.

Together, we absorbed the confused stares and thumbs-up from San Franciscans watching us putter quietly by. The report from the backseat indicated that there was plenty of legroom, but overall space was even tighter and the ride was less comfortable. After a loop around the neighborhood, I made a U-turn on Union Street and dropped her off at work, neither of us worse for the wear.

I headed for another cup of coffee in the Lower Haight, and I was finally starting to embrace the Quad lifestyle. It wasn't too bad to drive, given the relatively sunny and warm day. I began to take the awkward stares and occasional jeers in stride. I turned right onto Laguna, and noticed the aforementioned steep slope. I approached the double-digit grade nervously and with a heavy foot. I might have hit 20 mph or so, just before the speed began to drop. I hoped that my nerves would calm at a constant speed, but it was just me and the 1,045-pound Quad pushing tirelessly against the hill. There was a stop sign at the ridge at the top, and that's where I learned the beauty of the "California roll." I breathed. 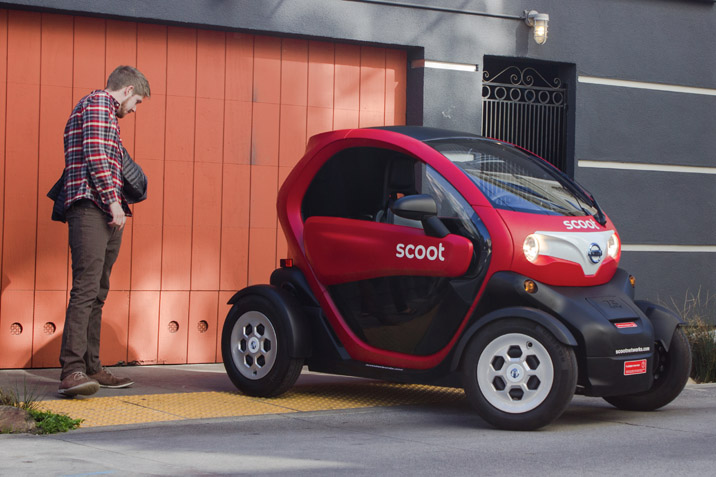 "We think it's just the best way to get around the city for everyone."

What was the takeaway from the public? One person asked if it was a "real car." A more enlightened observer asked if it was entirely electric. More than a few people stopped for smartphone photos, but a search later that day on Instagram revealed no correct tags. At the iconic Painted Ladies, a clowder of motorcycle riders surrounded the Quad, peppering me with questions about its origin and range. The driver of a Mercedes E-Class wagon pulled over and jumped out to take a photo.

The Quad was running dangerously low on battery, thanks to some aggressive cornering and hill starts, and I knew not the location of the nearest charging station. As I headed back to Scoot base, I feathered the brake pedal to capture the most energy. I eventually made it back to Scoot HQ with a few miles to spare, and the beads of sweat began to subside.

Does this initial phase of testing the Scoot Quad in the US mark the beginning of a silent revolution toward a sharing economy? There's no official word from Nissan or Scoot, but if the test period is successful, who knows?

Full Disclosure: I paid the Scoot sign-up fee to join and become a member, which included ride time.