Riding in the $1.1-million Youabian Puma

An Out Of Body Experience, In The Body Of A Volvo C70 It was high noon, way up in the hills of Calabasas, California, and I was lost in a $1.1 million exotic car – but wasn't at the steering wheel. The vehicle in question was the plump, fishlike Youabian Puma that you see above. It was way too big for these roads. At 20 feet in length and 7.75 feet in width, it turned two-lane streets into single-width passageways. It didn't help that the roads in this area crisscross and follow the curvature of the mountains, making them difficult to navigate. Up here, it was impossible for the Puma to blend in, among the arid landscape and desiccated trees.


At 20 feet in length and 7.75 feet in width, it turned two-lane streets into single-width passageways.

Eventually, we found a road sloping downward, and headed toward it. Dr. Kambiz Youabian, who was at the wheel of the automobile bearing his name, asked a pretty obvious question.

"How come it took you so long to contact me?"

It's been two years since Youabian first pulled the XXXL cover off the Puma at a hallway booth at the Los Angeles Auto Show. ("I had to fight for that spot," he said. "They wanted to put me downstairs with all the aftermarket vendors.") The Puma's polarizing looks and larger-than-life size elicited responses from the media passing by, and not all of them were positive. Somehow, Youabian was unable to warm to comments critical of the Puma's styling, including " man, is it ugly," and began to issue cease-and-desist notices to some publishers ( Autoblog included). Many brushed off the lawyers' memoranda, but they caused enough of a shock that coverage of the Puma, good and bad, ended almost right after the model's debut.

To put it lightly, it was in our best interest to wait before meeting our hero. 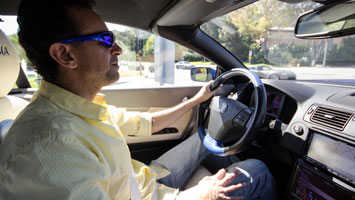 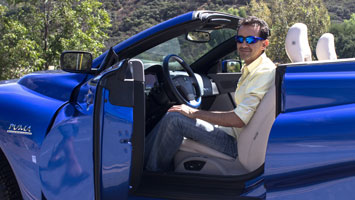 "Once people told me they were tired of sports cars, that's when I changed this to a 'monster truck' car."

For Youabian, the Puma is the culmination of a dream. "Since I was young, I wanted to design my own car and build something," Youabian said. "I always liked the sound of [Puma]. I wanted a name that was easy to say and catchy. I also like the animal. They're very exotic. They have a look to them that makes you fear them. With this car, I wanted it to feel like you own the road."

What you don't know about Youabian is that, when he is not designing cars, he works as a physician and medical equipment salesman. "I'm a doctor, but I've always been very hands-on," he said. "I like art, I like drawing things and designing them." The Puma was a concept that he devised and wanted to bring to fruition. "I drew this design on a piece of paper, and then had someone put it into 3D software," he said. "I consulted chassis designers, builders, and fabricators. Then the car was built from the ground up."

"I had designed this originally as a sports car," Youabian said. "Once people told me they were tired of sports cars, that's when I changed this to a ' monster truck' car."

When he does drive his Puma among real people, say, in traffic on a California freeway, Youabian has his share of confused admirers. "Everyone starts taking pictures and driving," he said. "I worry that they're going to start having accidents."

"Everybody's usually very nice," he said. "They have very nice feedback. They say, 'Great car!' A lot of them use profanity." He's heard a lot less in the way of negative feedback recently, so it seemed. 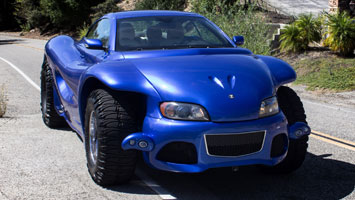 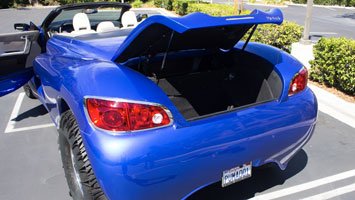 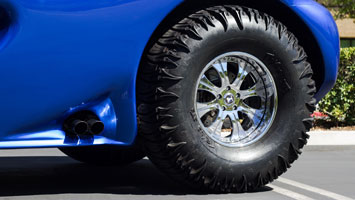 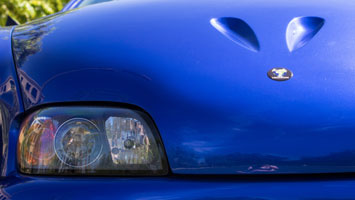 From vehicle genesis to series production, there were some hiccups. Listening to Youabian explain the hurdles, from unexpected costs to matters of publicity, it became easier to understand the Puma's slow-selling fate.

"Everything is hand-built – a lot of man hours," he said. "When I first started the project, I didn't think it would take so long to build. That's why, unfortunately, I've had to price it so high. I was hoping to price it lower, where it would be more affordable. Because it's so time-consuming to hand-build them, I've had to make it very expensive. ... I would have loved to open a dealership, but I haven't been able to sell as many cars to be able to do that." Production of the Puma is local, in Los Angeles.


Youabian originally wanted to use the V10 from a Dodge Viper.

The auto show introduction in Los Angeles generated enough hype that Youabian built three additional Pumas for customers in China, Japan, and the Middle East. Its near-$1 million price made the Puma inaccessible to most potential customers, although Youabian said that out-the-door prices have ranged from $750,000 to 900,000. But still, two years after the Puma's introduction, Youabian has only sold three cars (the fourth, the show car and one you see here, is for sale).

Those who did buy a Puma now own a rather extraordinary and rare vehicle. Its headlights come from a Volvo C70. Its taillights are from a Buick Enclave. Its engine is a 505-horsepower General Motors LS7 V8, the same one used in the last-generation Chevrolet Corvette Z06. (Youabian originally wanted to use the V10 from a Dodge Viper.) The Puma's transmission is related to the one found in the Cadillac Escalade. It's rear-wheel drive, although Youabian said that it can be configured as a true 4x4.

And it's a hardtop convertible. "At the time when I started this project, the Volvo C70 was the only hardtop four-seater convertible," he said. "It took me so long to get this car finished that, by then, there were plenty of other four-seater hardtop convertibles out there," but the C70 remains the donor car for the interior compartment. To make up for the added space of the folding hardtop, also sourced from the C70, Youabian installed a secondary trunk behind the space where the roof folds. 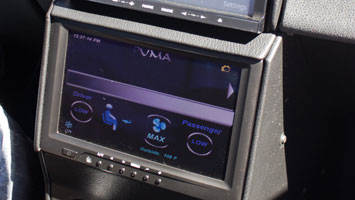 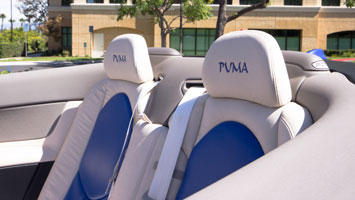 The interior of the Puma resembles the C70's in shape only, with redone digital gauges, additional screens, reupholstered seats, and some bespoke touches to the material finishes. It retains the C70's airbags and rollover protection system.


The ride is not comfortable at all, and spending time in the Puma is much like floating above a chassis rather than feeling what it's doing.

The tires, which appear to be monster truck-quality, are produced by Interstate and made for street use by large trucks. "This car theoretically has enough horsepower to do 160 or 170 miles per hour," Youabian said. "Because of the tire limit, I programmed the computers as 95 mph as the limit. I wanted to stay a little below that, to be safe."

Safety is relative. Back on the road in Calabasas, the Puma is moving about ponderously. It has the grunt of the aforementioned monster truck and the unusual build quality of a one-off. You sit high above everything else on the road, yet the Puma's tall sides and relatively ordinary daylight opening make it difficult to see what's happening below without peering down. The ride is not comfortable at all, and spending time in the Puma is much like floating above a chassis rather than feeling what it's doing. Steering and braking appear fairly normal, despite the Puma's oversized proportions. It is extreme in every dimension, and we were extremely relieved not to be driving it.

The Puma is even heavier than it looks, tipping a semi-truck scale at about 6,800 pounds, which Youabian notes is similar to a Hummer H2. "We could've made it lighter, but I wanted the chassis to be extremely strong," he said. "The big tires put a lot of strain on the chassis. My goal was not to make a light, fast car. It was for [the Puma] to be strong and safe."

"I fitted it with big tires just to make it stand out. I wanted it to be different and unique." 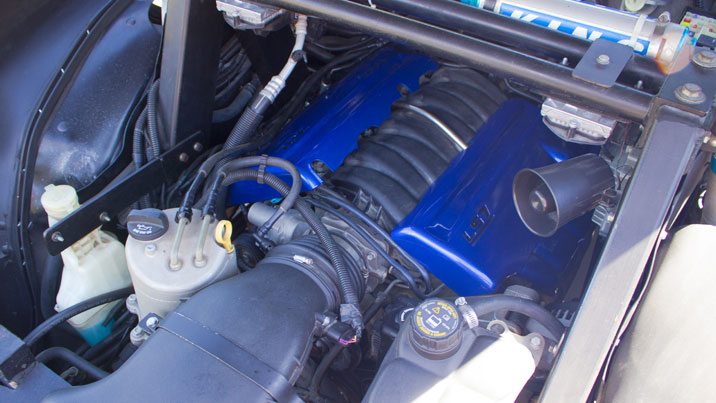 The Puma's acceleration is terrifying. It seems to defy physics, logic, and common sense that a 3.4-ton automobile can run to 60 mph as quickly as a Mazda Miata.

Somewhere along Ventura Boulevard, deep into the San Fernando Valley, we were sitting at a stoplight when a mischievous grin stretched widely across Youabian's face. When the light turned green, Youabian mashed his foot to the floor. The Puma's acceleration is terrifying. It seems to defy physics, logic, and common sense that a 3.4-ton automobile can run to 60 mph as quickly as a Mazda Miata. (It can. We have an unofficial clocked result of about seven seconds.) Given the right circumstances, Youabian said, the Puma can do a burnout.

Full-throttle motoring in the Puma is not for the faint of heart. The LS's characteristic gruffness and machismo, and the feeling of hurtling through the air in a Volvo that's riding several feet higher than normal, is an out-of-body experience. With the throttle wide open, the experience is both casually serene – credit the luxurious Volvo interior – and also death-defying. Again, the limited daylight opening and tall sides make it hard to accurately judge how fast you're actually traveling, although it's pretty clear that the Puma could level anything in its way.

Approaching a stoplight, Youabian switched quickly from gas to brake pedal and stomped on it. Hard. The Puma has 16-inch rotors in the front, and 14-inchers in the back. "Sometimes, I wonder if it will stop," he said. We rolled right on to the white stop line. The sweat beads dissipated – briefly.

The Los Angeles basin is not without its share of flashy supercars, and many of them dotted the roads where we were driving. Youabian sees exotic car owners as potential customers, but knows well that it's unlikely they'll replace their Lamborghinis with Pumas. 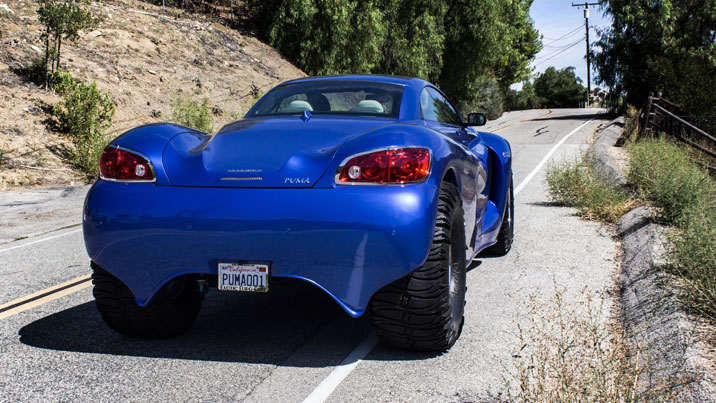 "This car ended up costing me so much money, and taking up so much of my time, that I don't want to do something like this again."

"This is for someone who already has those cars," he said. "They have so much money and are so bored, and just want something. That's the only person who would buy something like this. If someone had a choice between this and a $1 million Ferrari, of course the Ferrari would be number one."

A couple of stoplights later, as we neared the end of our test drive, a man driving a Nissan Leaf signaled to Youabian to lower his window. He looked puzzled.

"It's just different," Youabian replied. Then, he turned to me, looking ahead and pointing toward the electric Leaf alongside us. "They wanna talk to you all the time. I'm sure that people who drive hybrids look not so positively on this car."

But will Dr. Youabian's first foray into the automotive world also be his last? "This car ended up costing me so much money, and taking up so much of my time, that I don't want to do something like this again," he said. "Although, you never know. Down the line, I might get bored and decide to do something else."