Plus: Notes On The Evoque Convertible, AAA's Spare Tire Stats, And A Ghost Recall Cadillac's aggressive new cadence of crossovers begins next spring with the arrival of the 2017 XT5, the first of four new utility vehicles that Cadillac will unleash in a bid to win more customers and revitalize its image.

The XT5 replaces the aging SRX, and it's the first SUV to use the brand's new naming scheme (cars will use the corresponding CT prefix). Billed as the cornerstone of Cadillac's remade crossover lineup, the XT5 will join showrooms right after Caddy's new flagship, the CT6 sedan. It will be on display next week at the Los Angeles auto show after first appearing this month at the Dubai motor show.

"It's pivotal to our ongoing growth, which is why we've developed XT5 from the inside out to provide customers more space, more technology, more luxury, and more efficiency," Cadillac president Johan de Nysschen said in a statement.

"Pivotal" is almost understating the XT5 and the red-hot midsize crossover segment. The SRX is Cadillac's top seller in 2015, posting a 25-percent increase and its 56,732 units (up 25 percent) are more than one third of the brand's 141,090 sales this year. Yes, the totals have been partially incentive-fueled, and Cadillac put an average of $7,225 on the SRX's hood in October, according to TrueCar data. Still, it's an impressive performance for any vehicle, especially one that's had few major changes since the new generation launched as a 2010 model.

"The SRX has been selling very well, given how late in the lifecycle it is," AutoPacific product analysis manager Dave Sullivan told Autoblog. It outsold the all-new MKX last month and really only trails the Lexus RX. This is the volume model for Cadillac and dealers need this to be a grand slam, not just a home run."

Cadillac is adamant the XT5 isn't an SRX re-skin. It has a new chassis, more interior room, and adds features like Apple CarPlay and Android Auto. Thanks to a new structure, the XT5 sheds 278 pounds compared with its predecessor, which should improve fuel economy and driving character. The crossover uses General Motors' latest 3.6-liter V6 rated at 310 horsepower and 270 pound-feet of torque, and it is fortified with variable-valve timing, cylinder-deactivation, and stop-start features. The V6 will team with an eight-speed automatic transmission and a twin-clutch all-wheel-drive system than can summon all of the torque distribution to the front or rear axles. Cadillac will also sell a 2.0-liter turbo four-cylinder model in China.

The design is evolutionary – this still looks like the SRX – but it's dressed up with a new grille, flashy light piping, and a chiseled crease that stretches from the front door to over the taillight. Cadillac is also giving the XT5 a Platinum model with uplevel interior materials and exterior trim, something the SRX never had. "That should really help the XT5 prove to be a real upgrade for those cross-shopping other brands," Sullivan said.

General Motors is spending $12 billion on Cadillac to strengthen its product portfolio and will add eight new vehicles by the end of the decade, but as the sales numbers illustrate, few will be as important as the XT5.
OTHER NEWS & NOTES 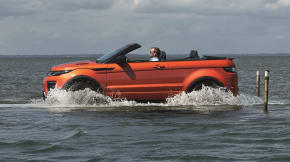 Speaking of Los Angeles-bound crossovers, the Land Rover Range Rover Evoque convertible promises to be one of the more intriguing displays at the show. It's a four-seat SUV convertible, after all. The Evoque droptop features a fabric roof that can be stowed in 18 seconds and raised in 21 seconds at up to 30 miles per hour. Naturally, convertible elements like a wind deflector, rollover protection device, and the ability to put down all four windows with the touch of a button are present. Like its coupe sibling, the convertible employs a 2.0-liter four-cylinder engine making 240 hp teamed with a nine-speed automatic and all-wheel-drive. It goes on sale in mid-2016 with a starting price of $51,470. 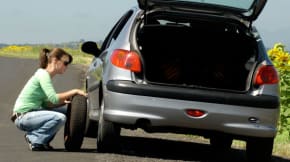 Sacrificing spare tires in the name of weight savings has become common for automakers as they race to meet stricter CAFE standards, but AAA argues this tactic is causing problems for motorists. The insurance and travel company notes tire inflators can't handle sidewall punctures or blowouts. AAA claims 30 million motorists are vulnerable because of the lack of spare tires. "The reality is these kits can accommodate specific types of tire damage, but having the option to install a spare tire can save stranded drivers time and money," John Nielsen, AAA's managing director of automotive engineering and repair, said in a statement. Just five percent of 2006 model-year vehicles did not have a spare tire, but 36 percent of 2015 models were sold without one. 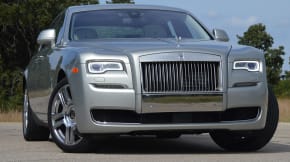 Perhaps a text would have sufficed...

On a lighter note (yes, we know all recalls are serious), Rolls-Royce is recalling a single Ghost for an airbag problem. That's right, one Ghost. The thorax (chest) airbags fitted to the front seats might not meet side-impact requirements and increase the risk of injuries, the National Highway Traffic Safety Administration said. The 'campaign' began in October. Kudos to Rolls for playing this one by the book.