Now that it has completed its prototype testing duties in mud, water, and dunes around the world, the Range Rover Evoque Convertible is presented herewith for your pleasure. The only major change compared to the hardtop Evoque that buyers continue to lap up is the fabric top - all else is just as you've known it. But that lone change is indeed a major one.

The insulated top has been designed to maintain the tin-top's profile when up. It folds in the shape of a "Z," like the top on a Porsche 911 Cabriolet, so that the forward section of the roof looks like a tonneau cover when it is stowed. Behind it, there's a small spoiler on the rear edge to manage airflow. The top goes down in 18 seconds and comes back up in 21 seconds, and can be operated at speeds up to 30 miles per hour. There's seating for 4 but only 8.9 cubic feet of storage in the cargo area to split between them, because convertibles and luggage don't mix. The hardtop Evoque coupe offers 19.4 cubes of storage.

Debuting on this vehicle is the next generation of Jaguar- Land Rover's In Control Touch Pro infotainment system. It boasts a 10.2-inch screen and comes standard. Up front there's the 2.0-liter, 240-horsepower four-cylinder engine that powers the entire range, coupled to a nine-speed transmission. The Evoque convertible goes on sale in the middle of next year in two trims, SE Dynamic and HSE Dynamic, and will start at $51,470, assuming the same $995 destination charge the automaker applies to its other models.

There a bunch of videos below, followed by a press release and a high-res gallery. We'll see it at the LA Auto Show next week, and perhaps seeing it in person will help cleanse all memories of the Nissan Murano CrossCabriolet.

(MAHWAH, N.J.) – November 8, 2015 - Land Rover has unveiled its first compact convertible SUV against the backdrop of the University of the Arts' famous Central Saint Martins building in Granary Square, Kings Cross, London. The Range Rover Evoque Convertible combines the bold design and refinement of the Range Rover Evoque with a sophisticated folding roof to create a versatile, all-season convertible SUV.

As the newest member of the Range Rover family this highly desirable model combines traditional Range Rover luxury with an elegant four-seat convertible design and versatile storage while simultaneously meeting the rigorous standards set by the Land Rover brand; ensuring superior structural rigidity, trademark refinement, and unrivalled breadth of capability both on- and off-road.

Gerry McGovern, Land Rover Design Director and Chief Creative Officer, commented, "The Range Rover Evoque Convertible is a vehicle for all seasons. Its uniquely distinctive design and world-class engineering add another dimension to the Range Rover family, further enhancing its desirability and appeal."

The global Land Rover SUV market is forecast to grow by 20 percent over the next five years1 and the Range Rover Evoque Convertible will play a key role in continuing the 45-year Range Rover success story.

The eye-catching exterior design of the Range Rover Evoque Convertible is made possible by a sophisticated fabric roof shaped to create a defined silhouette that remains faithful to the vehicle's original award-winning design. Its Z-fold mechanism lays flush with the rear bodywork for a sleek, uncluttered appearance when lowered.

The fully-automated roof stows in 18 seconds, and can be raised in 21 seconds, at speeds up to 30mph3. When closed, it provides high standards of refinement with a layer of acoustic insulation ensuring interior comfort on par with the five-door Range Rover Evoque. The 8.9-cu. ft. (251-liter) luggage space offers added practicality.

At the heart of the cabin is an all-new, 10.2-inch touch-screen featuring the next generation Jaguar Land Rover InControl® Touch Pro™ infotainment system. Making its debut for the Land Rover brand on the Range Rover Evoque Convertible, InControl Touch Pro offers seamless smartphone integration and is available with door-to-door navigation, Wi-Fi connectivity and a premium sound system2.

The new Range Rover Evoque Convertible will be produced at the Land Rover Halewood plant in the UK, alongside the five door and coupe body styles, and goes on sale from mid-2016 in more than 170 markets worldwide.

1 Based on May 2015 IHS Forecast.
2 Do not use Land Rover InControl® features under conditions that will affect your safety or the safety of others. Driving while distracted can result in loss of vehicle control.
3 Always follow local speed limits.
4 These systems are not a substitute for driving safely with due care and attention and will not function under all circumstances, speeds, weather and road conditions, etc. Driver should not assume that these systems will correct errors of judgment in driving. Please consult the owner's manual or your local authorized Land Rover Retailer for more details.

About Land Rover
Land Rover, the British maker of Land Rover and Range Rover sport utility vehicles, is renowned for providing its clientele with some of the most luxurious and capable vehicles in the world. Every Land Rover vehicle is equally at home both on and off road, and in any setting; be it in the heart of the city, or traversing the countryside. Today's Land Rover lineup includes the Discovery Sport, Range Rover, Range Rover Sport, Range Rover Evoque and LR4 (Discovery 4). Land Rover designs, engineers, and manufactures their vehicles in the United Kingdom. Land Rover is fully engaged with sustainability initiatives and social concerns with continuous involvement in environmental and community programs. For more information visit the official Land Rover website at http://www.landroverusa.com. 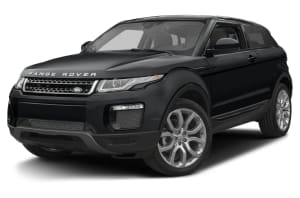