Dozens Of TDI Owners Have Filed Complaints Over Deceptive Advertising Volkswagen developed the advertising campaigns for its "Clean Diesel" cars far better than the actual technology. In dozens of complaints filed with the Federal Trade Commission in September, green-minded consumers said they were enticed into buying diesels by the company's advertising, which touted the environmental benefits of new diesel technology. Those alleged benefits convinced many to buy cars they otherwise would not have considered.

In actuality, Volkswagen installed secret software in its cars that allowed the company's diesels to brazenly circumvent emissions standards. For environmentally conscious consumers, those decisions backfired. Instead of helping the environment, they drove cars that polluted at up to 40 times beyond the legal threshold for certain emissions.

Now, those consumers are angry. They've asked the Federal Trade Commission to investigate Volkswagen for alleged deceptive advertising, and are hoping the federal agency can intervene and force Volkswagen to either buy back their compromised cars or negotiate trade-ins on favorable terms. An FTC spokesperson confirmed the agency is investigating.

Many of those who wrote or called the agency said they felt like they had nowhere else to turn. For green-friendly drivers, it wasn't only about the money. It was also about the betrayal.


"I am ashamed to drive this car on the road, as doing so is evidence that I have been taken for a fool."

"It's awful for the environment," wrote one consumer from Shreveport, Louisiana, on September 24, days after the diesel scandal unfolded. "It's caused me anxiety thinking about the amount of emissions I have been producing."

The motorist's comments echoed others filed with the FTC. Many owners felt trapped with cars they couldn't sell and cars they felt they could no longer drive in good conscience, knowing they spew nitrogen oxide at levels that violate the Clean Air Act. "I do not see how I can drive it knowing highly toxic pollutants are being produced," wrote another driver from Middletown, Rhode Island. "I have not driven the car since this news came to light."

The two statements were among the 89 filed with the FTC's Consumer Sentinel Network in the week following the Environmental Protection Agency's announcement that Volkswagen had admitted rigging approximately 482,000 cars in America with software that allowed them to cheat emissions testing. Those cars conformed to test standards during testing, but in real-world operations, they emitted 10 to 40 times the allowable amount of nitrogen oxide.

Names of the car owners were redacted in the complaints, which were obtained via a public-records request. But the writers and callers struck similar tones, noting they had desired to make environmentally friendly purchases, and had accepted advertising claims that "old diesel realities" of acrid, smoky pollution "no longer apply. Volkswagen's website once said, "We've ushered in a new era of diesel." Customers said they felt duped and deceived. 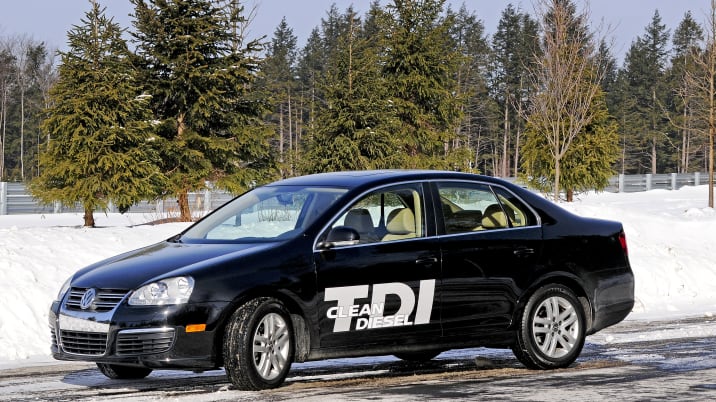 One from Dripping Springs, Texas, wanted a "socially responsible vehicle," writing, "We live a vegetarian, composting, raise goats for milk and chicken for eggs, kind of lifestyle." That customer had Toyotas, Subarus, and BMWs on their shopping list, but made their decision to buy a VW Golf TDI because it was better for the environment. Now, "I am ashamed to drive this car on the road, as doing so is evidence that I have been taken for a fool." The car owner is asking the FTC to help them pursue a full refund or a no-cost trade-in on a current model vehicle.

A customer in Lake Placid, New York, had the misfortune of being at a Volkswagen dealership on the morning of September 18, signing the paperwork for their new Passat TDI, just as the EPA i ssued a notice of violation to Volkswagen. Volkswagen "tricked me into buying this particular vehicle based on the 'clean diesel' marketing and the fuel economy, and I paid a premium for these supposed features."

When the customer attempted to return the car after reading news reports the next day, they told the staff at Shearer Volkswagen in Burlington, Vermont, they "felt tricked." It's unclear whether the dealership made any efforts to ameliorate the situation.

A customer in Goddard, Kansas had a similar experience. He had purchased a 2015 Passat six days before news of company's cheating broke. When they called the Mike Steven Volkswagen dealership in Wichita, he tells the FTC the dealership replied, "there was nothing they could do for him."


"I would have never bought a VW if it wasn't good for the environment."

As they expressed their anger in being unwittingly turned from green-friendly drivers into polluters, the customers provided insight into their shopping decisions. Records show that it's not only customers who have a concern with Volkswagen, but their aggrieved competitors who lost out on sales. Volkswagen's advertising assurances that "old diesel realities" no longer applied was a key factor for customers passing up the likes of the Toyota Prius, Mazda3, models in the Subaru lineup and more.

A customer in Austin, Texas, said they originally had intended to buy a Mazda3, but with cost and performance "close enough to be a wash" they made the "environmentally conscious decision" to instead buy a Golf TDI. A customer in Montrose, Pennsylvania, said they had a "tough choice" to make between a Passat TDI and a Toyota Prius V.

Though analysts at automotive research firm Kelley Blue Book says the Prius and VW's TDI models aren't typically cross-shopped by consumers, those who detailed their shopping process in complaints mentioned the Prius as the runner-up in their buying decisions more than any other car. A driver in Arlington, Virginia, described choosing a VW TDI "because of the promise that it was cleaner for the environment – with high MPG ratings" over the Prius C.

A Volkswagen customer from Bountiful, Utah, worries that customers' grievances will be lost amid big federal fines levied by the EPA or penalties determined by the Department of Justice.

"Consumers who are environmentally mindful like those who purchased VW 'Clean Diesel' cars should be reimbursed before fines are paid to the EPA," they write. "The EPA doesn't need money, but I do. ... I would have never bought a VW if it wasn't good for the environment."