View All Specs
One crucial change to the 2016 Infiniti QX50 (formerly known as the EX35) may have just made the company's smallest crossover suddenly relevant. So how does one add appeal to an eight-year-old model, without any significant cosmetic or powertrain updates? By addressing its biggest flaw head-on: size.

For the 2016 model year, Infiniti has stretched the QX50's wheelbase by 3.2 inches, and the crossover is now 4.5 inches longer overall. In addition to a roomier cabin – 8.3 cubic feet more to be exact – there's one number that sticks out above all else: four more inches of knee- and leg-room in the back seats. Like scoring an exit-row seat on your flight, the extra space may be just enough to change the experience.

So how can the upmarket Japanese automaker justify costly changes to the platform when it's only moving 250 of these vehicles in the US per month? Americans can thank the Chinese for that. As in the US, sales of small crossovers are quickly rising in China – a country where being chauffeured is more common for those of means – and rear-seat passengers who can pay for a driver don't want to feel like they're sitting in the penalty box. The platform-sharing economics work, and in this case, everyone stands to benefit. 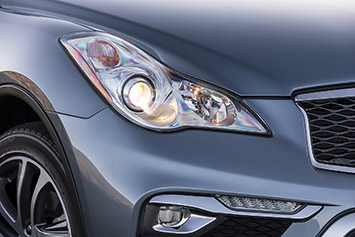 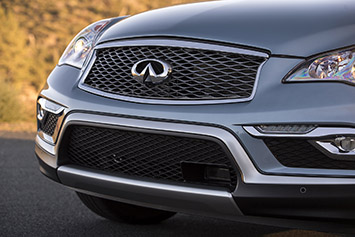 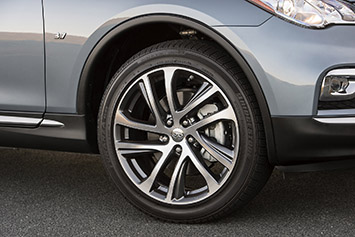 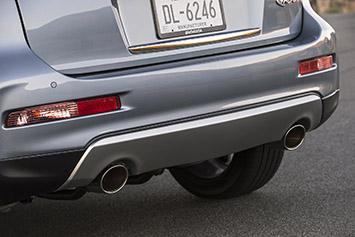 Infiniti says it considers the Acura RDX and Lexus NX as the QX50's direct competition, but it's worth noting that both of those competing models sell more in just one month than Infiniti's smallest crossover sold all of last year. The QX50 isn't likely to reach its competitor's levels anytime soon, but Infiniti hopes the roomier iteration will pique shopper interest. To help that cause, the 2016 model gets a few light cosmetic touches too. Up front it receives a new grille that's more in line with the brand's current design language, new LED fog and daytime running lights, new door mirrors with LED turn signals, revised side sills, and a new rear bumper.

Beyond aesthetics, pricing is reduced by $500 from last year, with the rear-wheel-drive 2016 QX50 now starting at $35,445 after delivery. The all-wheel-drive version adds another $1,400 to that price. All models get more standard equipment, including a power moonroof, heated front seats, and the new LED accents.

Inside the cabin, things look much as they did when the crossover first debuted as the EX35, back in 2007. Small upgrades have followed through the years, and despite its age, the cabin still feels premium, comfortable, and familiar. 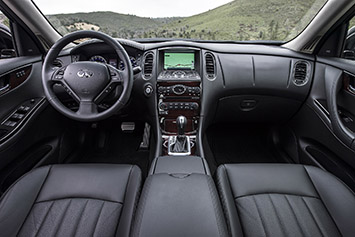 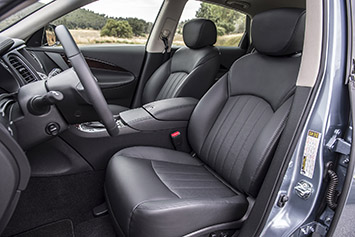 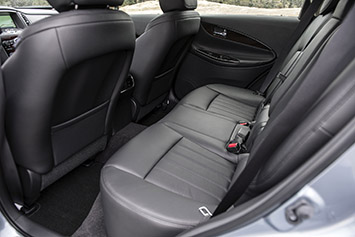 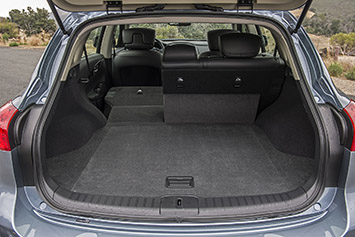 The lone engine option carries over, Infiniti's 3.7-liter V6, good for 325 horsepower and 267 pound-feet of torque.

Some of the buttons and switches are recognizable from more pedestrian Nissan models, but we can overlook that, thanks to some neat features. Infiniti was the first to offer an optional electronically controlled rear seat that allows you to bring either or both sections of the 60-40 split second-row upright, with the touch of a handy switch on the center console. And controls in the trunk allow you to fold, or bring the seats back up, as well. There's also a unique integrated coat hanger that folds out from the back of the driver's-seat headrest, an unexpected feature on our loaded, $44,935 as-tested model. While the $2,000 Premium Plus Package includes an upgraded touchscreen with an around-view monitor, seven inches is the biggest you can get. Infiniti will have to remedy this on the next generation as even some economy cars offer larger screens as an option. The monitor is quick to respond to haptic touch, however, the color graphics are attractive, and the system is easy to navigate.

The lone engine option carries over, Infiniti's 3.7-liter V6, good for 325 horsepower and 267 pound-feet of torque. The engine is one of the most powerful you'll find in the segment, shy of something like the far pricier Porsche Macan. Power comes on quickly from the V6, and the seven-speed automatic upshifts in a smooth, linear fashion while getting up to highway speeds. While you won't find paddles on the steering wheel, there is a manual mode available on the shifter for those who want more control, with down-shift rev-matching. 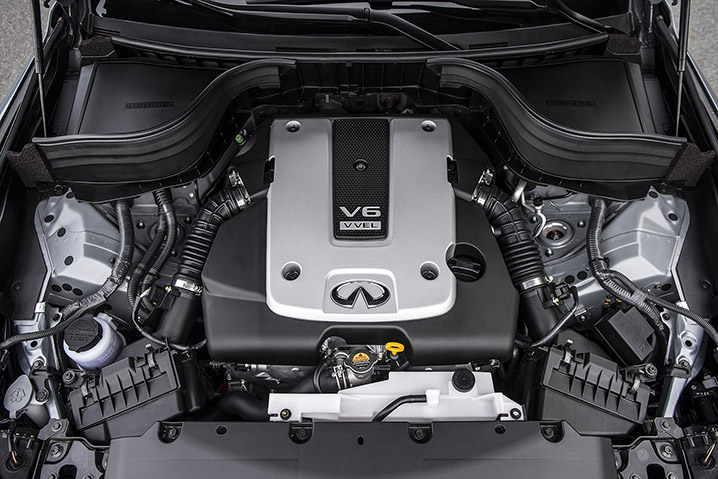 The QX50 is the clear driver's car among its peers.

Beyond power, the QX50 is the clear driver's car among its peers. The Infiniti feels nearly as nimble and astute as ever, despite being raised 0.8-inches from the previous year. Steering is more heavily weighted than one would expect on a small crossover, but it works fine in this application. Driving around the hills of San Diego County, the all-wheel-drive model maneuvered our route with easy competence. Elevation changes, corners, rough and smooth roads were dispatched with pleasure. A lot of this character is down to the rear-biased all-wheel drive system. The Infiniti mostly operates as a RWD car, but can direct up to 50 percent of power to the front wheels as needed.

Despite its sporty performance, refinement levels are high. The independent front, and multi-link rear suspension are tuned for comfort, with none of the rough asphalt we experienced on one stretch translating through to the cabin, even on our model's upgraded 19-inch, five-spoke wheels. The QX50 we tested was very quiet on the few stretches of coarse highway, too, with road and wind noise barely noticeable. Still, the engine note is audible when you get hard on the throttle. Overall the noise and vibration work done here is commendable – a lot of what you want to hear, very little of what you don't. 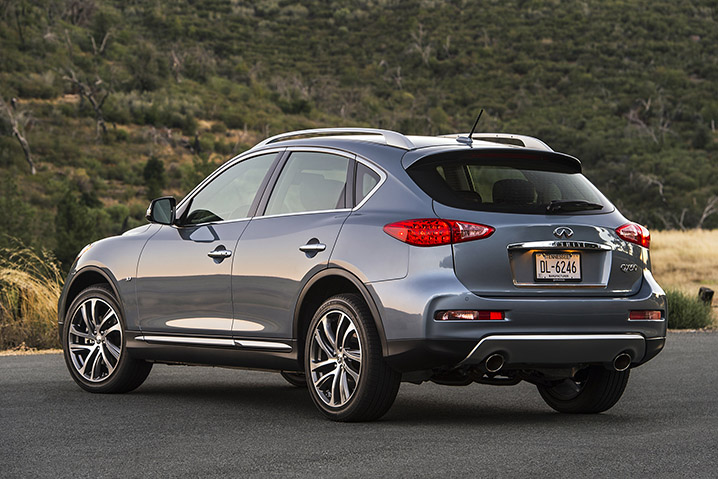 The QX50 has been given a lifeline.

If we're to consider the newest QX50 within its primary competitive set, luckily for buyers, each crossover represents a very distinct offering. The Lexus NX is the newest of the bunch, and is the only one motivated by a turbocharged engine, its 2.0-liter is good for 235 horsepower and 258 pound-feet, far less power than Infiniti's 325-pony offering. But the NX boasts far better fuel economy; its 21/28 city/highway ratings represents four miles-per-gallon better more in both environments than the Infiniti. Aesthetically, the NX is more aggressive, sporty, and generally polarizing.

The Acura RDX represents a definitive middle ground; like the QX50 it counts on a V6 engine for power, this one rated at 279 horses, and 252 pound-feet. And just as it's middle of the road power-wise, its 19/28 mpg city/highway ratings slot between the two. The RDX's styling is more muted compared to NX, but a little more angular and crisp than the QX50's curves.

So where, exactly, does that leave the QX50? Infiniti's crossover is the clear athlete of the group, and definitively the most fun to drive. Having addressed its cramped backseat, the QX50 has been given a lifeline, with four adults fitting comfortably. Paired with a slight price reduction, and more standard content than before, Infiniti's smallest crossover distinguishes itself, and merits a test drive for those shopping the segment. 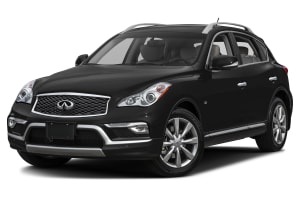