Noah Joseph
Nissan may not have won the overall 24 Hours of Le Mans before – Mazda remains the only Japanese automaker to have done so – but when it returns to Le Mans this year, it will be armed with other bragging rights. And it's that past accomplishment that Nissan is celebrating with this throwback livery. 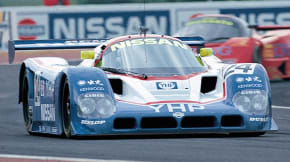 Twenty-five years ago, Mark Blundell set a blistering qualifying lap in the No. 24 Nissan R90CK, lapping La Sarthe in 3:27.020. That was enough to put the Datsun on pole for the race, and though it never made it to the finish line, it set a record that stands to this day when it hit 227 miles per hour on the Mulsanne straight – even with the chicanes in place.

That car wore a blue livery with white and red that still holds a place of honor in the hearts of racing fans. So to mark its return to Le Mans a quarter century later, Nissan is decking out its new GT-R LM Nismo in a tribute livery that will be worn by the third entry the company will be fielding in the race.
Show full PR text
Nissan celebrates 1990 pole lap of Le Mans with retro livery for LM P1 car

LE MANS, France – Nissan today revealed a very special livery that will feature on the No.21 Nissan GT-R LM NISMO at Le Mans. Exactly 25 years ago, at the peak of the Group C era, Mark Blundell put the Nissan R90CK on pole position with a stunning 3:27.020 lap of the Le Mans circuit.

The No.24 Nissan R90CK will also appear at Le Mans in a special parade to mark the anniversary of the pole lap in the hands of the man who took it to the top of the tables 25 years ago, Mark Blundell. The 1100bhp car may not reach speeds of 366 km/h (227 mph) as it did in 1990, but it is certain to grab everyone's attention.

"That lap of Le Mans is certainly a very fond memory for me," said Blundell. "It was one of those moments where time stood still and everything went perfectly. You remember those moments, as they don't happen all that often. It's great to see Nissan celebrating that time with the retro livery on the #21 Nissan GT-R LM NISMO. I can't wait to see it on track at Le Mans."

"Our racing heritage is hugely important to us," said Darren Cox, Global Head of Brand, Marketing & Sales, NISMO. "Our 1998 car hangs on the wall at NISMO HQ in Yokohama as a reminder of our Le Mans podium, and the blue liveries of the Group C and IMSA era of the 80s and 90s are a firm favorite with the fans. So much so that when we first started talking about the possibility of a third car livery specifically for our LM P1 debut at Le Mans this year, this was the one that fans across our social media channels called for. It's a great way to celebrate our past achievements at such a key moment in our current motor racing history."

The Nissan NISMO LM P1 team has three Le Mans rookies who will all need to complete their mandatory 10-lap runs during the test day. To allow the team to focus on tuning the GT-R LMs into the circuit, the rookies will all drive a Ginetta-Nissan LM P3 car that will be taking part in the test.

Once their laps are complete, the car will be handed to 2013 GT Academy USA winner Nick McMillen as part of his development – once again demonstrating the global nature of the Nissan Motorsport effort. A second LMP3 car will also be on track with Olympic gold medalist Sir Chris Hoy.