View All Specs
Add a Review
If you get hot and bothered for hot-rodded sedans and coupes, you probably know that Germans have long dominated that cutthroat scene. For years, the Audi RS/ BMW M/ Mercedes-AMG triumvirate has ruled the microcosm of grunty, mid-level luxury cars. But a funny thing happened when Cadillac's first V car hit the market in 2004. Since the CTS-V crashed the high horsepower party, German tuning houses started thinking less about the "Daddy's Caddy" stereotypes and more about the next imminent threat – in this case, the inevitable high-horsepower spinoff of the smaller, nimbler Cadillac ATS.

The standard ATS' defense against the German triad hasn't been triumphant so far ( GM's Michigan plant was idled for three weeks in 2014 due to excess inventory), but the souped-up 2016 Cadillac ATS-V presents a fresh bid to put the Teutonic competition on alert. 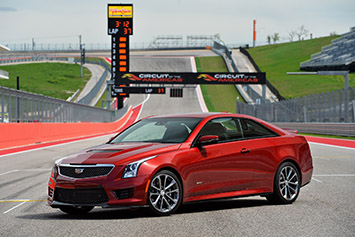 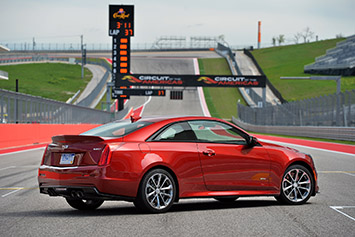 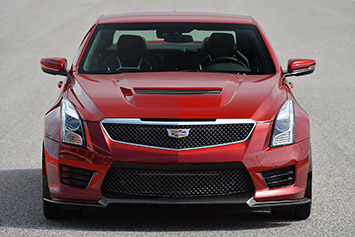 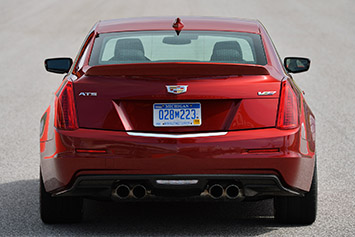 The ATS-V's flared bodywork and quad exhaust pipes offer bits of visual shock and awe, but significant hardware upgrades back up the go-fast looks. Front and center is a twin-turbocharged, 3.6-liter V6 with reworked internals including a charge-air cooler, titanium connecting rods, and titanium-aluminide turbines. The new engine produces 464 horsepower and 445 pound-feet of torque, up a staggering 262 hp and 173 lb-ft compared to a base, four-cylinder ATS. Those output figures eclipse the BMW M3/ M4 (425 hp, 406 lb-ft) and Audi RS5 (450 hp, 317 lb-ft), but lag slightly behind the V8-powered Mercedes-AMG C63 (476 hp, 479 lb-ft), and more so the C63 S (503 hp, 516 lb-ft).

The chassis benefits from several structural braces, most notably a shear panel intended to boost front-end stiffness. Extra poundage from the add-ons are minimized through lighter-weight materials – in the case of the shear panel, stamped aluminum. Cadillac says though it intended to make the ATS the quickest car in its segment (stated 0-60 mph times between 3.8 and 3.9 second virtually match the BMW M4 and Mercedes-AMG C63 S' 3.9 figure), the development team says they also focused on subjective qualities like turn-in quickness and steering response. As such, toe links have been replaced with ball joints, mounts have been retuned, and reworked magnetic damping offer greater responsiveness. Six suspension bushings have been stiffened and ten have been completely redesigned, and the Performance Traction Management system that tames beasts like the Corvette Z06 and Camaro ZL1 also helps lay down power in the ATS-V. 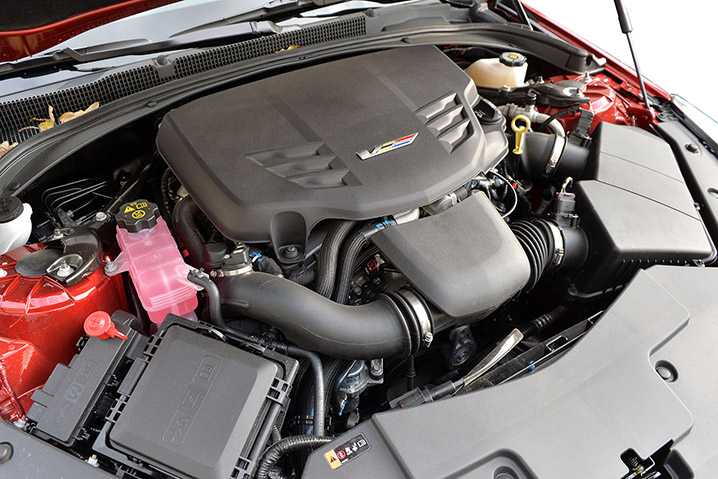 At 150 miles per hour, the optional carbon fiber package (which includes a more aggressive splitter, Gurney lips, a bigger spoiler, and a rear splitter) adds 10 pounds of front lift and 50 pounds of rear downforce, netting 40 pounds of overall downforce. The track package adds a performance data recorder and a lighter battery, and removes the floor mats, tire inflator kit, tow hook, and sunroof.

By replacing the hydraulic steering and passive suspension damping with electric steering and a third-gen Magneride setup, Cadillac says the car's limits are more controllable while offering a wider dynamic range. Tens of thousands of hours of CFD (Computational Flow Dynamics) computer time were also used to fine-tune airflow in order to finesse the vehicle's drag and lift dynamics. "The first fluid or function that overheats betrays all the other work we've done," says Cadillac chief engineer Tony Roma. "The idea here is controlled disaster, where all the temps are just below the threshold [to optimize airflow and balance drag and lift]." Uprated six-piston front and four-piston rear Brembo brakes aid stopping power. 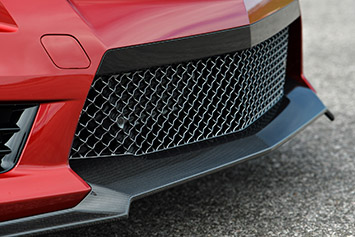 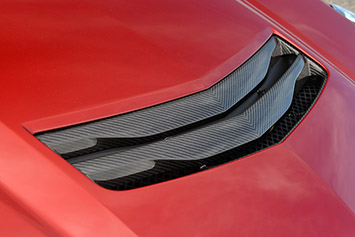 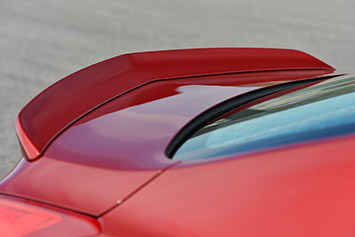 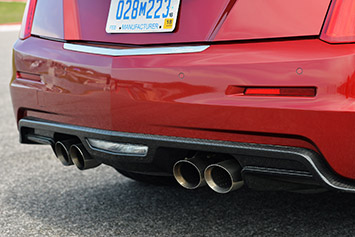 As for gearboxes, Roma says Cadillac opted for an eight-speed torque converter-equipped automatic over a dual-clutch transmission, which would have been heavier and potentially less fuel-efficient. "Dual-clutches are also uber expensive if you don't already have one in your lineup," he says, though Roma does admit that the smoothness and swiftness of the latest Porsche 911 GT3's transmission made it the first dual-clutch to change his opinion about the technology. The eight-speed auto shares many parts with the 6L80 'box found in the Z06 (and can handle up to 650 lb-ft of torque), while the manual offers launch control, active rev matching, and no-lift shift, a feature that enables the driver to keep the throttle pinned between cog swaps in order to maintain turbo boost.

In the face of its European competition, the Cadillac ATS-V's cabin still feels every bit American, with a predominantly angular, contemporary design theme. All-new Recaro seats were built to spec, with microfiber-trimmed contours. These chairs have a linear, angular design – they won't be confused with anything used by Audi RS, BMW M, or Mercedes-AMG.

Our first drive of the Cadillac ATS-V starts in downtown Austin and heads to Circuit of the Americas, a rather unexceptional route that reveals little of car's true personality, especially since we opted for a standard-drive mode. That said, the ATS-V seems livable in real-world conditions, a fact backed up by Cadillac's David Caldwell, who describes the ATS-V as having "track-capable luxury" that is more like "a scalpel," as opposed to the upcoming, überpowerful CTS-V, which is essentially a four-door Corvette Z06 he likens to "a sledgehammer" with "maximum aggression and capability." 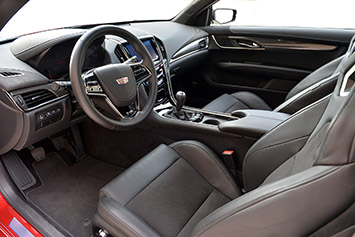 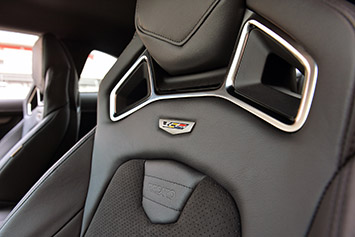 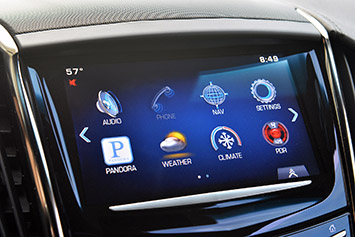 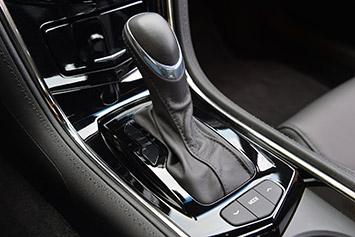 Aimed at Circuit of the America's uphill front straight that leads directly into the daunting, off-camber left-hander, the ATS-V's launch control system fires the car off with a bang, squatting as it climbs strongly through the revs. Though you're not treated with quite the same boom-out-of-the-chute! feeling during normal launches due to the relatively tall gearing and somewhat progressive torque buildup, the eight-speed auto performs admirably despite its slushbox architecture; upshifts are quick and rev-matched downshifts occur swiftly. Once into the meaty part of the torque curve, the ATS-V accelerates with gusto, and even more impressive is how it stops. The big, six-piston Brembos are capable of scrubbing off speed dramatically. After braking far too early during the first lap or two, the powerful stoppers give the confidence to build up higher speeds before finally stabbing the left pedal. On the back straight we hit 145 mph, and being able to rely on the binders makes the engine's output even more meaningful than its 464 horsepower figure might suggest.

The manual gearbox is a hoot on the track, but requires some leaps of faith from drivers unaccustomed to newfangled electronics on row-it-yourself shifters. The no-lift shift function allows the accelerator to stay mashed in between shifts, and keeping the pedal pinned makes any mechanically sympathetic driver think twice. But once the deed is done, the reward is a smooth flow of power that GM engineers say trimmed lap times by 1.5 seconds at the company's Milford Proving Ground track. Also assisting the argument for the six-speed manual transmission is rev-matched downshifting, which works like a charm and can be easily switched off. 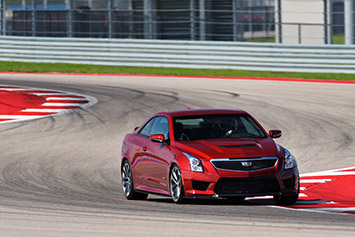 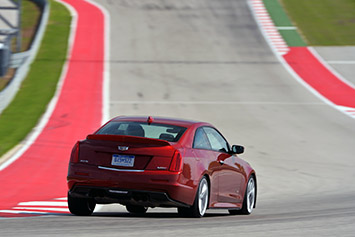 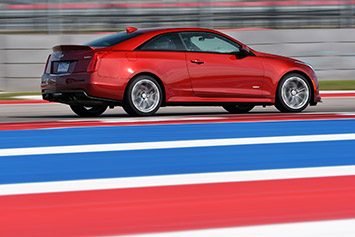 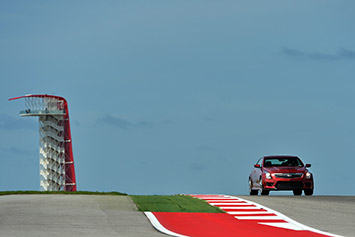 "Our tuning philosophy isn't to out-BMW BMW," chief engineer Tony Roma says, and given that the latest M3 and M4 are powerhouses that don't feel quite as connected to the road as they used to is a good thing for Cadillac, as its competition has taken a slip in that department. Though the ATS-V delivers better steering feel than you might expect from Caddy, the golden age of BMW's legendary M-series cars of yesteryear still can't be touched when it comes to tactile feedback and transparent road feel. Though it works better than you might expect for an electric unit, there's still a hint of artificiality to the ATS-V's steering feel. Nonetheless, the ATS-V turns in nicely and responds well to steering input, though the body can feel a tad heavy when pushed harder. The first lap or two of a track session also reveals excellent damping over curbing, thanks in part to lightweight components that contribute to low unsprung mass, and partly due to the adaptive suspension's ability to soften when necessary.

The V6 offers what is arguably a more satisfying torque curve than the near-perfect linearity of BMW's inline-six, but those powerplants lose ground to Mercedes-Benz's V8-powered C63, which wins the engine wars with its punchy power delivery and raucous personality. And speaking of sounds, Cadillac uses the stereo speakers for noise cancellation as well as audio augmentation that enhances engine tone. "We're not piping in engine sounds," insists Roma, but rather "amplifying small sections of what you like to hear." Because the firing order of the V6 creates tonal patterns in orders of three, the system is designed to tune out unwanted sounds that are developed below 3,000 rpm. That algorithm gets flipped above 3,000 rpm, at which point it adds audio content through the speakers. That said, the philosophical debates about audio augmentation will no doubt rage onward, which begs the inevitable question: If the Caddy sounds fine with the system (as it does), would we want it to sound less expensive and refined without? 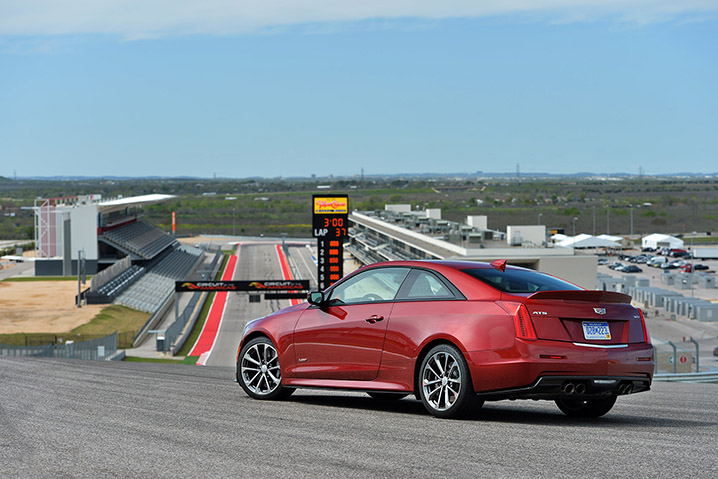 All factors considered, the 2016 Cadillac ATS-V draws more philosophical discussion than any V product before, namely because of its price point. Whereas previous V cars made a statement because of their bang-for-buck proposition, the ATS-V becomes a bargain when options are piled on, a real world reality that has a way of handicapping its German competitors, especially BMW. Starting at $61,460 for the sedan and $63,660 for the coupe, the Cadillacs don't seem far off from BMW's $62,950 and $65,150 MSRPs until you consider that base Bimmers lack keyless entry, parking assist, a rear-view camera, satellite radio, and active damping. And while the Mercedes-AMG C63's starting price of $63,900 is a bit more plausible, the C63 S's $71,900 entry point is next-level steep (as is its performance), putting the ATS-V into a more favorable economic light.

Most impressive is how the ATS-V stands up to its German foes. Sure, you can put a finer point on the differences and note that the Cadillac's V6 lacks the addictive qualities of the Mercedes-AMG C63's torquey V8, or realize that its chassis isn't quite as delicately balanced as the BMW's, but you might be missing the point. Cadillac has stepped up with a seriously competitive car, and its ATS-V makes a strong argument for itself in a high performance realm where it wasn't always taken seriously. Some drivers may still prefer to go German – and those reasons are perfectly valid – but now more than ever, it's a compelling time to opt for the American alternative. 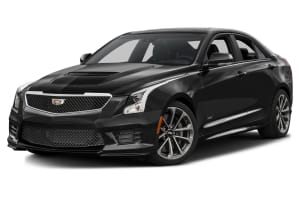