I slept in the Tesla Hotel [w/video]

Sebastian Blanco
We both knew it was absurd. People sleep in their cars all the time. Why should I fly across the country simply to "report" from a car parked in some guy's garage? Why was this in any way important? Well, for one thing, this particular car had been featured on media outlets around the world. And because sometimes you need to go check out the absurd to find a new truth or two. And because you just want to have some fun.

The car in question is a Tesla Model S owned by Phoenix resident Steve Sasman, and he listed his spacious back seat in Airbnb late last year. A local NBC news station paid him a visit but it wasn't until the local CBS station did a similar report right before the Super Bowl (which was held in Phoenix this year) that the Internet noticed. The quirky story caught the attention of outlets around the world and Sasman started getting calls from German media, a radio station in Portland, OR, and Bloomberg. This is a car that can make news – a lot of news – when it's not even moving. Sasman couldn't respond to every interview request because he was busy driving the hotel room/EV as an Uber ride during the Super Bowl week. Today, the car has its own website, TeslaRenter, and given Sasman's skill at figuring out how to attract attention with his car, you probably won't be surprised to hear that Sasman has written an ebook called How Almost Anyone Can Afford A Tesla. But here's the twist: Sasman admits the Tesla hotel thing is "not that serious."

But it did get attention, just like almost anything Tesla-related these days. Here's that first NBC news report:


When Sasman first listed the car, it was promoted at $85 a night but now the price is $385 a night. There's a reason for the, oh, let's call it surge pricing. "To be honest," he told me when I went to check out his digs, "I put it that high because I didn't want people to do it. If someone really wants to do it and they want to pay $385, then okay. I just didn't want two people a week coming here. I'm happy to do it, but it takes a lot of time out of your day to set it up." He offers to pick guests up at the airport and drop them off in the morning, but not if you have a 7 a.m. flight, as I learned.

Sasman is more interested in using his Airbnb car to get people talking about two things. One is his own business, which is renting out vacation homes in Phoenix and Flagstaff, and the other is electric vehicles. It's this second one that we're most interested in here. Before we get to that, let's talk about the sleeping experience.

For decades, people have found ways to turn their cars into bedrooms (even when others try to ban the practice), and this is simply the next-gen evolution. Sasman's not the first to figure out how to sleep in a Model S. There are pages and pages on the Tesla forums discussing the best way to leave the car on all night or how to add a tent to the mix.

Sasman came up with his set-up by sleeping in the car himself. The first few times he drove his new EV to Flagstaff he slept in it because he's not the kind of person to pay for lodging when he owns a place in town. "I really didn't want to pay to sleep somewhere else," he said, "and yet someone had rented my place, so I had nowhere to stay for a couple days. Rather than drive all the way back to Phoenix or stay in some lousy hotel, I just said, what the heck, I'm going to try out this thing where you can sleep in the back." He bought a couple thin yoga mats, which worked but the arrangement wasn't very comfortable. "I'm 6'3" and I had plenty of room lengthwise but, obviously, sleeping on a yoga mat is not ideal," he said. "I did that a couple times and then realized that if I ever want to do this again, I'm going to do it right." He found an air mattress that fits in the back perfectly and plugs into the car's 12V outlet to inflate and deflate. His whole kit fits in the hidden compartment where the rear-facing child seats would stow if he had that option. "[The mattress] is always there if I need it," he said. "It's not something I would do every time or every day, but it's nice to have the option." 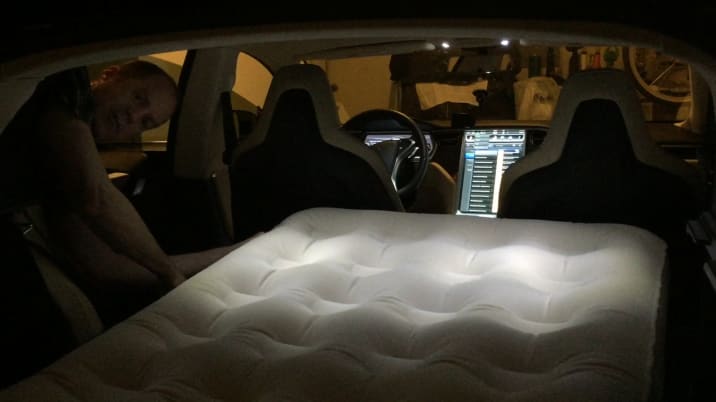 Once outfitted with the air mattress and sheets and battery-powered candles – which come with a remote, in case the whole thing wasn't absurd enough - the back end of a Model S is in fact quite comfortable. An excellent host, Sasman put a board beneath the mattress to keep things flat, but it never felt quite like I was perfectly horizontal. From my experience backpacking, I knew enough to make sure my head was on the elevated side, which in this case meant pointed towards the front of the car. There was plenty of room inside the car (I needed to get in and out from the rear hatch because there's so little room in Sasman's garage. He has put up black pads on the walls to prevent the doors from getting scuffed up when they open.

Sasman has figured out that you can run music or HVAC options all night if you put the car in neutral and engage the parking brake, but I kept the trunk open all night for some airflow and left the AC off. Even if you run it or the heater all night long, it only uses about 17 miles of range, Sasman said. "That probably costs less than a dollar in electricity." And, with no carbon dioxide fumes to worry about, Sasman said the Model S is "legitimately the best car to [sleep] in." 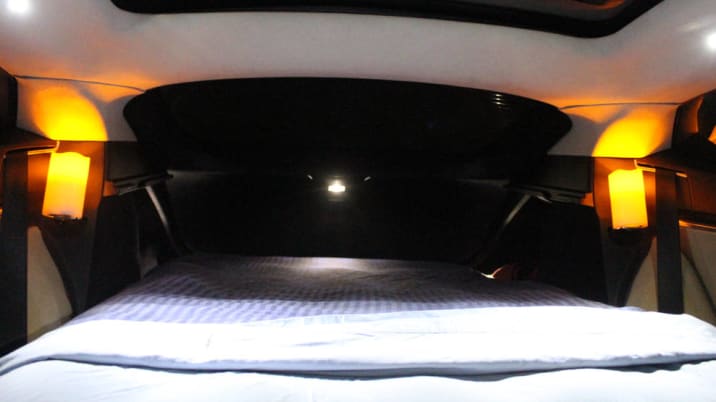 Sasman also knew the Model S was the best car for him to own. He got excited about Tesla because he wanted to get away from burning gas – round trip to his properties in Flagstaff cost him $100 in his Ford Explorer – and from relying on foreign countries for oil, plus the pollution factor. "I just hated all that," he said. "I'm kind of a technology person, so you combine that with the fact that it's just the most futuristic car and that it's fast and sexy and everything else, and that drew me to it. And then I started reading all the forums on Tesla and you just hear all these people raving about it and how great it is and you just can't help but be like, 'I want this.'" His main problem? The expense. He said that he knew he really couldn't afford this car, but told himself, "I really, really want it and I'm just going to find a way to make it work, one way or the other."

Which is why he participates in both RelayRides and Uber with his Model S [ UPDATE: Sasman used RelayRides with his previous vehicle, not with his Model S], and why he thought of Airbnb scheme (I was the second person to spend the night in the car, so that particular angle hasn't been a big money maker). Still, every little bit helps. For example, if you can swing it, you'll want to sign your Model S with Uber Black or Uber Select, he said. But, if you have the type of job where meeting people is important (like, say, real estate agent), then the mediocre pay from Uber X might be worth it because you can get new contacts. For Sasman, with Tesla's Superchargers at Cordes Lakes, each trip to Flagstaff is basically earning him $100 now, for example. Sasman also bought the P85 used for around $79,000 six months ago with just over 35,000 miles on it. It now has over 50,000. "A lot of people don't realize that you can buy these things used and you can save a ton of money." Especially now, with the P85D on the market. "You've got all these people that would have never thought about selling who are like, I want the P85D, so they're putting the P85 on the market. When I looked, there were only 40 or 50 available across the whole country, now there are several hundred. If you want to buy a used one, it's definitely the time to do it." 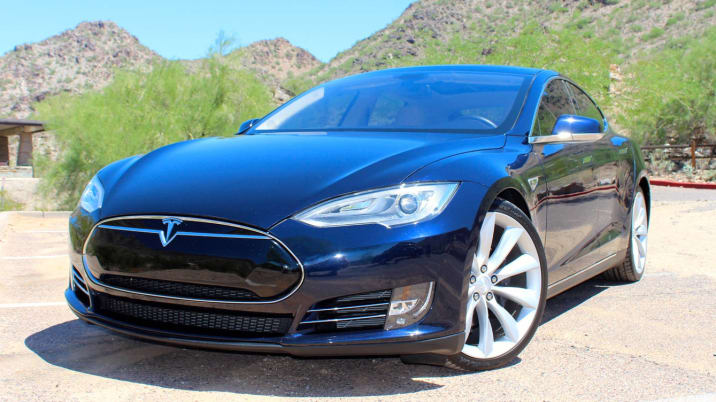 Even if you can't pay for the entire cost of the Model S, using methods like this, you can "at least draw it into an acceptable range where it's not going to sink you," he said (he's not the only one). Sasman understood that the power of the Tesla brand today is powerful enough to attract attention throughout Phoenix and the Internet. When some of his Uber fares hop in, they're blown away. "There are some people who are indifferent, or maybe they're just busy and thinking about their day and what they have to do, but it is surprising how many people are completely floored and excited and it makes their day and they ask you a million questions," he said. "It gets a little repetitive, but it's still new enough for me that I don't mind it at all. I want to promote it, too. Overall, it's very, very, very positive."

Sasman's experience with his car has been a good one as well. He and his Uber fares love the smooth, quiet acceleration. When he's not filling up at a Supercharger, he charges at home and said, "it's easier than gas. I wake up with a full tank every day, doing nothing. I tell people, it's as easy as charging your cell phone." The only time he felt any little bit of range anxiety was the first week he had the Model S and drove to Flagstaff, going 75 miles per hour the whole way up into the mountains, using the A/C. He was conscious of his depleting range, but not too worried. He arrived with about 12 miles of range left in the battery. Since then, he's gotten smarter about driving an EV. "I think the whole [range anxiety] thing is blown out of proportion," he said.

My night in this famous Model S was positive as well. I didn't get to sleep to much, to be honest, because I took part in a Reddit AMA late at night and then had to catch an early flight home. I did learn that 5:30 is too early for Sasman to drive you back to PHX, but there are other options to get you to the airport these days. I ordered an Uber, of course. Then something odd happened. When it's 5:30 in the morning and dark in Phoenix and you're at a random condo complex and an Uber car shows up a few minutes before the app says yours is scheduled to arrive, but the driver is looking for someone named Brandon, it's clear that this app is popular.