The Rear-Engined Hatchback, However Improbable

In cars, as in all things, there exists a huge chasm between what is possible and what is probable. It may be possible, for example, that within a few years, we'll be zipping around town in hydrogen-powered, autonomous flying cars. But the likelihood is that we'll all be driving four-wheeled vehicles with internal combustion engines and our hands at ten and two for the foreseeable future – just as we have for generations. The same goes for the layout of those cars we drive.

It's possible for automakers to put the engine just about anywhere they want. And there are those that place them behind the cabin. But those are mostly exotics. The overwhelming probability is that the next car you buy – like the one before it, the one in which you were driven home from the hospital and every one in between – will have its engine up front.

That's what makes this new Renault Twingo so intriguing. While competitors like Volkswagen and Fiat succeeded their rear-engined hatchbacks with conventional front-engined ones, Renault has gone the opposite direction with its new Twingo, switching from a front-engine layout to a rear one. Think Porsche 911, only far, far more accessible. That is, at least, for European buyers, because Renault doesn't sell any of its models (Twingo included) in North America. So we boarded a flight for France to see if this new-old approach has merit. 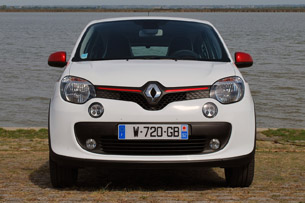 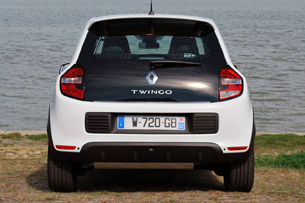 With the exception of the Twizy (arguably more of a four-wheeled scooter than a car), the Twingo is Renault's smallest model. The original launched in 1993 with cheeky look masking a typical front-engine, front-drive layout and a three-door greenhouse that was as big as its footprint would allow. Before long, it was dominating the segment with a 25-percent market share and 200,000 sales per year in the late 90s (more than Porsche's total annual sales combined), but shrunk to a low of about 50,000 in 2006. An all-new model arrived in 2007, boosting sales back up to nearly 175,000 units in 2009. Despite a 2011 facelift, increasing competition in the city-car market saw Twingo sales plummet below 100,000 in recent years. With rivals like the Fiat 500 and Panda, Peugeot 108/ Citroën C1/ Toyota Aygo and VW Up! taking a bigger slice of an increasingly competitive pie, Renault felt it had to do something radical. So it partnered with Daimler to co-develop a new rear-engined city car. Daimler's will be the new Smart Fortwo and Forfour models, and Renault's is the new third-generation Twingo you see here.

Though its layout may be its most notable attribute, the new Twingo is all about packaging. Anyone who's seen Coppola's Tucker: The Man and His Dream will assume that putting the engine in the boot necessarily shifts the trunk to the nose, but Renault ruled that out for a number of reasons. For one thing, keeping the Twingo user-friendly meant redistributing mass, packing the snout with items like the radiator and fluid reservoirs to give the Twingo 45/55 weight distribution. For another, pedestrian crash regulations mean there wouldn't be much space under there for luggage anyway, at least not without raising the hood and impairing the Twingo's exceptional forward visibility. Reserving the nose for non-engine-related mechanical bits also helps leave room for the wheels to offer a 45-degree turning angle. That's better than anything this side of a Toyota iQ and it makes the Twingo extraordinarily maneuverable around town. 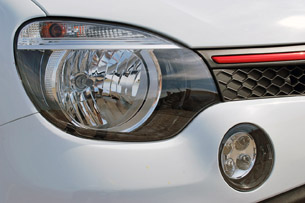 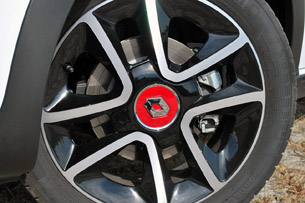 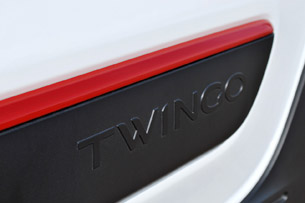 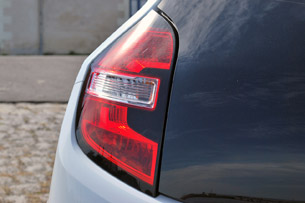 There's enough room inside for a seven-foot, seven-inch basketball player to lie down in a vehicle just 141 inches long.

Still, at the presentation in Nantes, vice president of design Laurens van den Acker admitted that, if he had known how often the subject would come up, he'd have tried to squeeze in at least a small luggage compartment up front. But since he didn't, cargo capacity in the Twingo is divided up. There's a flat load floor atop the engine, a compartment under the rear bench, and every seat except the driver's folds flat, leaving enough room inside for a seven-foot, seven-inch basketball player to lie down in a vehicle just 141 inches long. That puts its overall length between the Fiat 500 (which doesn't have rear doors) and the Panda (which does).

This third-generation model is actually the first Twingo with rear doors, yet it stretches no longer than the three-door it replaces. That rear bench only has two seats, though, and in order to maximize elbow room (as well as minimize cost and weight), Renault had to do away with roll-down rear windows in favor of pop-out vents (like the Aygo and its French cousins). That's because the Twingo is narrow and upright instead of short and wide, in part to keep its drag coefficient down while providing a more upright driving position. The form factor also allows for space to fit in an electric powertrain underneath in the future – a priority of both Renault (which offers more EV models than any other brand) and Daimler (for whom the Smart ED is one of its few). 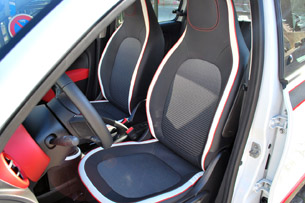 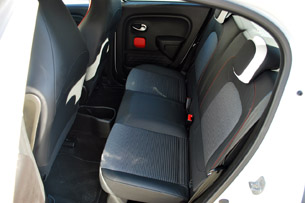 The Twingo's cabin is spartan, but it feels basic, not cheap.

The Twingo's cabin is spartan, but it feels basic, not cheap. The plastics are hard to the touch but solid, while customization options give the cockpit a fun vibe. Think of the interior treatment as more like the colorful iPhone 5c than the upscale 5s, and its relative exterior size like an iPod Nano on a road packed with full-size boom boxes. Buyers can opt for either a seven-inch touchscreen infotainment system or dock their smartphones, and though we would have welcomed more adjustability in the steering wheel and seat (and maybe some additional instrumentation), we particularly enjoyed the suitably Gallic optional 28-inch fabric sunroof while zipping up and down France's Atlantic coast.

Which brings us to our driving impressions. We'll start by saying that any preconceptions of the Twingo qualifying as a budget Porsche should go right out that sunroof. The Twingo is about cheap urban transportation, not performance. That being said, driving a tiny rear-drive hatchback with near-perfect weight distribution is a refreshing change of pace from the usual nose-heavy hatch. That leaves the steering feeling light, but Renault has done a good job of weighting the rack to give it a sufficiently confident and on-center feel through the chunky steering wheel. The ride is also nicely damped and less pogo-y than a Panda's, and feels surprisingly sporty for a budget hatch, but it's clearly oriented more towards the mass market than to enthusiasts. 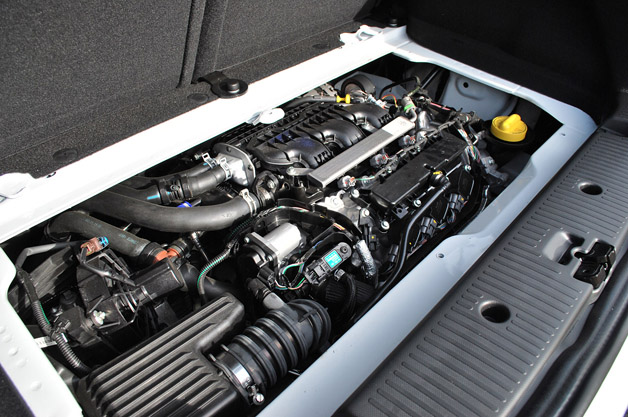 Behind the rear bench rests one of two tiny three-cylinder engines: a 1.0-liter or a turbocharged 898cc version with 90 hp and 100 lb-ft.

The Twingo exhibits no trouble shedding speed, but then there's not much inertia to slow in the first place. That's because behind the rear bench rests one of two tiny three-cylinder gasoline engines: a 1.0-liter with 70 horsepower and 67 pound-feet of torque, or a turbocharged 898cc version with 90 hp and 100 lb-ft. We sampled both and felt the difference between the base model that takes 14.5 seconds to reach 62 mph and the turbo that takes 10.8. Neither are what you'd call "rapid" or even "smooth," but at just 2,000 pounds, there's not a lot of weight to move.

Both engines are mated to notchy five-speed manuals, with a dual-clutch transmission due next year. After repeated prodding, we were told that Renault has yet to decide on a more powerful version. The last Twingo was the first to be offered in Renaultsport guise, and apparently sold in numbers too small (and offended too many purists) for the automaker to go the same route again. Which is a bit of a shame, because the prospect of a rear-engined hot hatch – the kind only Renault could pull off – is an enticing one. In the end, there may be a sportier version still to come, but it's too early to place bets. 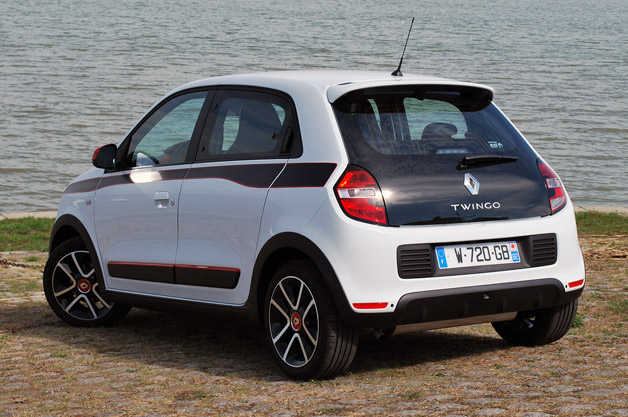 The more immediate reality, however, is that while it might be possible for Renault to bring the Twingo to North America (as Fiat did with the 500), the overwhelming likelihood is that we'll never see one on American roads. Its partnership with Daimler is not contingent on regional participation, but Renault's departure from American showrooms in the late '70s leaves the US city-car market for the new Smarts to conquer. If the Twingo is any indication, they just might win over buyers looking for small, agile and affordable modes of transportation.

Possibly, if not probably.