Every year, the Volkswagen Group gets each of its mainstream brands to put together a new concept or two to present to the gathered fans at the GTI-Treffen at Wörthersee, Austria. The Volkswagen, Škoda, Seat and Audi brands all participate (to the exclusion of Porsche, Lamborghini, Bugatti and Bentley), but the German industrial giant also gets its apprentices to take part as well. Each year a team of interns transforms the company's prototypical hot hatch – the venerable GTI – and this is what they came up with this year.

Reviving the famed Wolfsburg Edition badge, this one-of-a-kind GTI takes its inspiration from the city where the first Golf was born 40 years ago and the original GTI two years after. The team of twelve apprentices – eight men and four women – worked for nine months to put together the concept, and now it's ready.

At the heart of the GTI Wolfsburg concept is the 2.0-liter turbo four from the Golf R2 rally car producing a massive 375 horsepower, eclipsing not only the 227 hp in the stock GTI but also the 290 in the Golf R, and approaching the output of the Golf R 400 concept.

Of course the engine isn't the end of the story. The team also hand-painted the car in red, with black stripes and the stylized Wolfsburg city skyline appearing throughout: in the door stripes, on the horn button, the wheel hubs and the inside door panels. The cabin features a pair of Recaro buckets, inversely upholstered with tartan bolsters and black leather and red stripes. The interns even went to the pain of 3D-printing the one-off air pressure display, and installed auxiliary gauges above the infotainment display. There's even a 2,170-watt, 11-speaker sound system among the many details you can delve into in the press release below.
Show full PR text
Inspired by 40 years of the Golf: Volkswagen apprentices unveil their Golf GTI Wolfsburg Edition at Wörthersee
Debuts for further pilot studies Golf Variant Youngster 5000 (Zwickau) and ŠKODA CitiJet (Mladá Boleslav)

They have achieved their goal: 12 apprentices from Wolfsburg today presented their 380 PS (279 kW) Golf GTI Wolfsburg Edition at the 33rd Wörthersee GTI meeting. Their sporty two-door model is painted in Absolute red with decor strips in Negro Magico black. Many other optical and technical details also reflect the ideas for their dream GTI developed by budding skilled workers from Volkswagen and Sitech Sitztechnik. In the implementation of the project and in choosing the name for their car, the young people, aged between 18 and 23, were inspired by the 40th anniversary of the Golf. The first standard Golf rolled off the production line at Wolfsburg in 1974, followed by the first Golf GTI in 1976.

The Golf GTI Wolfsburg Edition is a visible result of high-quality practical training at Volkswagen. From the collection of initial ideas through to today's world premiere before more than 200,000 car fans in Reifnitz am Wörthersee, budding automotive mechatronics technicians, vehicle paint technicians, vehicle interior fitters and process technicians specializing in plastics and rubber engineering invested many hours in the project. The four young women and eight men planned, tested and implemented almost everything themselves. In doing so, they gained considerable specialist expertise. They also developed to form a strong team of which project manager and instructor Holger Schülke is especially proud.

Over the past nine months, the four women and eight men reshaped a standard Golf GTI Performance1 in line with their own ideas, both technically and in terms of appearance. The modified 2.0-l TSI engine from the Golf R2 has an output 380 PS (279 kW). The unique GTI is fitted with a carbon air box and a hand-welded stainless steel exhaust system with vacuum valve control allowing the volume of the engine sound to be regulated.

For the optical design of their car, the apprentices decided on a red and black interior and exterior color scheme that gives the Golf GTI Wolfsburg Edition an expressive note. The car is entirely hand-painted and was ground and polished several times to ensure a seamless paint finish.

The exterior is dominated by absolute red uni paintwork. Black (Negro Magico Pearl) decor strips and hand-crafted high-gloss black attachments give the vehicle a sporty note: the one-off parts include spoilers and claw-type inserts on the front bumper, door sills, and a rear spoiler with additional flaps and a rear diffuser. Wide triple stripes run over the centre of the bonnet, roof and roof edge spoiler. The side stripes fading to the rear are reminiscent of the first-generation Golf GTI. The apprentices have positioned a special eyecatcher in this stripes on the doors; the Wolfsburg Skyline in absolute red, featuring eight Wolfsburg landmarks, Schloss Wolfsburg, Planetarium, the Car Towers at Autostadt, Phaeno, Autostadt Customer Center, Volkswagen Arena (the VfL Wolfsburg soccer stadium), the Volkswagen power plant and headquarters building. The hand-made lasered Wolfsburg emblems on the horn button and the hubcaps also honor the "cradle" of the Golf.

The interior continues the color scheme with considerable attention to detail: two Recaro bucket seats at the front and a rear seat bench with black leather upholstery, red stripes over the headrests and inverted side bolsters covered in GTI tartan (Clark). The black leather multi-function steering wheel features decorative seams and painted absolute red spokes. The high-gloss black trim strips on the door trims have sprayed GTI logos. Another feature that called for extremely precise working was the hand-crafted center console with an integrated, stowable iPhone Docking Station.

The apprentices also put new technologies to use: for example, the charge air pressure display is a one-off part produced using a 3-D printer in the research department. The additional instruments (charge air pressure gauge, stopwatch and oil temperature gauge) were integrated into the central console above the infotainment display. The Wolfsburg skyline was also applied to the interior door trims using a special embossing technique, which means that the skyline emerges from the leather.

For the power festival at Wörthersee, a really extravagant audio system is also important. This is why the Golf GTI Wörthersee features a high-and sound system with an output of 2,170 W and 11 on-board speakers. In the boot, a monobloc amplifier with integrated LED lighting, a powerful subwoofer in the left module and a PlayStation with 24-inch LED-LCD TV set optical and acoustic highlights.

Since 2008, Volkswagen has offered its best apprentices the opportunity to expand their specialist knowledge and to demonstrate their creativity and teamwork capabilities on special vehicle projects like the Wörthersee GTI. The Golf GTI Wolfsburg Edition is the seventh apprentice GTI to make its world debut in Reifnitz. Its predecessors were also attractions at major events such as the IdeenExpo in Hanover.

Sarah Till (22), apprentice vehicle paint technician from Helmstedt: "My personal highlight is the absolute red Wolfsburg Skyline. It really looks great in combination with the black side stripes."

Sebastian Wagner (21), apprentice automotive mechatronics technician from Süpplingen, Helmstedt Rural District: "I like the hand-welded stainless steel exhaust system with vacuum valve control. It allows you to turn the engine volume up and down. Normally, you can only do that with a Porsche."

Nathalie Magnus (23), apprentice automotive mechatronics technician from Rühen, Gifhorn Rural District: "I demonstrated performance and perseverance in my training and it was an honor for me to work on the Wörthersee GTI. I am proud to be in Austria with my colleagues."

Sina Golkowski (19), apprentice process technician specializing in plastics and rubber engineering from Tülau, Gifhorn Rural District: "We worked hard on our dream GTI. I think it looks fantastic and will be very popular with the crowd at Wörthersee."

Holger Schülke, project manager and instructor: "The Wörthersee GTI is a real highlight and an important project for vocational training at Volkswagen."

Prof. Heiko Gintz, Head of Vocational Training with Volkswagen in Wolfsburg: "By working on the Wörthersee GTI project, our apprentices learn about the complexity of automobile production. During the creation of their vehicle, our budding skilled workers cooperate with experts from a variety of different professional families – from initial sketches through to approval by the Board of Management. This vehicle project offers our apprentices the best opportunity to benefit from the knowledge of their experienced colleagues from the entire company."

Klaus Mohrs, Mayor of the City of Wolfsburg: "I am excited about the Volkswagen apprentices' new GTI. The landmarks of Wolfsburg are really well presented. The apprentices' GTI will be an ambassador of our city at the Wörthersee meeting."

GTI creations of apprentices for the Wörthersee meeting:

Other pilot studies making their debuts at the Wörthersee
For the first time, apprentices from the Volkswagen plant at Zwickau (Germany, Saxony) and the Mladá Boleslav (Czech Republic) plant of Group brand ŠKODA will also be presenting pilot studies at the 33rd GTI meeting. These studies demonstrate the inventiveness, performance and hand-crafting skills of apprentices from the Volkswagen Group.

The Golf Variant Youngster 5000 from Zwickau
For the first time, a Golf Variant is being presented at the Wörthersee meeting. This Volkswagen model is only produced at the vehicle plant in Saxony. The "Youngster 5000" show car was developed at Zwickau as part of a talent program together with six apprentices. The unique model is painted in Arancio argos pearl and is powered by a modified 320 PS (235 kW) four-cylinder GTI engine with Performance1 package. The integrated Bilstein suspension can be controlled via an iPhone. The bumpers, the door sill package and the seat system are taken from the range of Volkswagen R GmbH. The "Youngster 5000" takes its name from the sound system with an output of about 5000 W mounted on skids in the rear of the vehicle, which can be controlled using a special iPad.

The ŠKODA CitiJet from Mladá Boleslav
The ŠKODA CitiJet, a city cabriolet with styling that is sporty, dynamic and expressive, is the ŠKODA apprentices' dream car. The study based on the ŠKODA Citigo3 is the result of the "Apprentices' Car" project. For six months, 16 ŠKODA apprentices worked on the vehicle, which is making its public debut at Wörthersee. The exterior features distinctive blue and white metallic paintwork and 16-inch alloy sports wheels, painted blue. Other features include a hand-crafted rear spoiler and a powerful exhaust with twin tailpipes. The sporty interior is based on the ŠKODA Citigo Sport special model. In addition, a special 300-Watt audio system is installed. The blue LED interior lighting reacts to music. 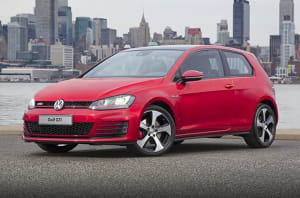