More Than Meets The Eye

View All Specs
Add a Review
For most new car shoppers, three-row crossovers are little more than a way for the family-minded to avoid succumbing to the minivan stigma. Admit it – the only things that differentiate most larger CUVs from minivans are their lack of sliding side doors and – on most of them – the option of all-wheel drive. Having blossomed into a popular segment with thicker profit margins, though, automakers have plenty of incentive to keep their offerings fresh, and that's exactly why Kia is presenting its 2014 Sorento so soon.

At first glance, the crisply styled utility vehicle seen here appears to be nothing more than a mid-cycle refresh – and not a particularly extensive one, at that. But that's not the case at all. Despite looking very similar to the second-generation vehicle that came on the scene for the 2010 model year, this is an all-new Sorento. Or, more precisely, it's about 80-percent new. Kia says less than 20 percent of the parts have been carried over from the 2013 Sorento, and that's a pretty typical amount for an 'all-new' vehicle generation.

Since we've yet to spend quality time with the "Made in the USA" Sorento for more than a short First Drive in Arizona last February, we snagged the keys to a 2014 model in the all-new SX Limited trim level for a lengthy backroad meander from Florida to South Carolina. 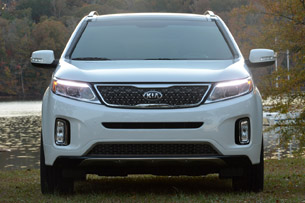 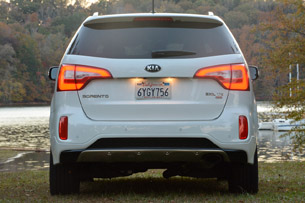 This third-generation 2014 model brings subtle changes that help make for an even better-looking crossover.

The second-generation Sorento helped inaugurate an entirely new design language for Kia upon its introduction in late 2009 as a 2010 model, and this third-generation 2014 model brings subtle changes that help make for an even better-looking crossover. These improvements include LED daytime running lights and vertical foglights up front, while horizontally oriented LED taillights add a much cleaner look to the Sorento's posterior than the outgoing model's square-shaped, honeycomb units. Overall, these modest improvements have given the 2014 Sorento a more mature and upscale appearance, but the changes are subtle enough that you could be forgiven for mistaking one generation for the other. Despite being a new model, we hear a substantial exterior update is in the near-term pipeline, so if you'd like some more visual differentiation, you might want to wait a while.

For the moment, though, it isn't until the hood is opened that you will start to appreciate just how new this Sorento really is. Front and center in the engine bay is the Sorento's new 3.3-liter, direct-injected V6, a slightly downsized engine that replaces the 2013 model's 3.5-liter mill. You can still opt for the base 2.4-liter four-cylinder, but this smaller engine is only offered on the lowest LX trim. Regardless of engine choice, all 2014 Sorentos are shifted with a six-speed automatic. The new V6 is definitely the way to go, as its 290 horsepower and 252 pound-feet of torque offer plenty of pep and surprising acceleration for the almost-two-ton Sorento. 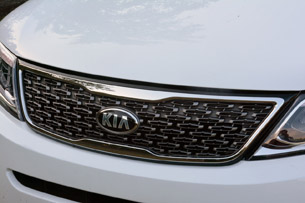 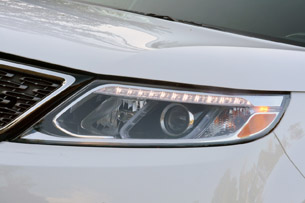 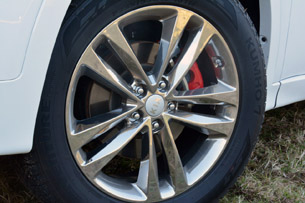 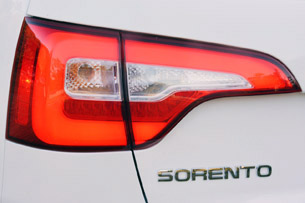 The official EPA rating ... is an unimpressive 18 mpg in the city and 25 mpg on the highway.

Unfortunately, while the 3.3-liter V6 brings an incremental power increase of 14 hp and 4 lb-ft over the preceding V6, it does come at the expense of fuel economy. The official EPA rating for front-drive V6 models like our tester is an unimpressive 18 miles per gallon in the city and 25 mpg on the highway, decreases of 2 mpg on the urban cycle and 1 mpg on the superslab. In an effort to see the small-town sights, we made the entire trip from north Florida to western South Carolina with minimal interstate travel, and we averaged 27.2 mpg for the entire 782-mile journey, getting as high as 28.1 mpg for a good portion of the trip. Interestingly, the Sorento's fuel tank capacity is down slightly (about a half gallon), but we still managed the whole trip on less than two tanks of gas.

Just behind the engine, sharp eyes will note some added plastic in the engine bay. This plastic covers the new strut tower support brace, which is perhaps the most visible indication of how far Kia has gone to improve the structural integrity of its new model. Kia says it has stiffened the Sorento's chassis by 18 percent, and, in the real world, this translates to a smoother ride with more confident handling. The Sorento has long offered a ride and handling balance that favors the firm and sporty, and while this continues to be the case, the word "rough" will no longer be used to describe its ride quality. Larger speed bumps are still enough to rattle some molars, but all other road surfaces and imperfections are absorbed ably by the suspension for a hassle-free driving dynamic. 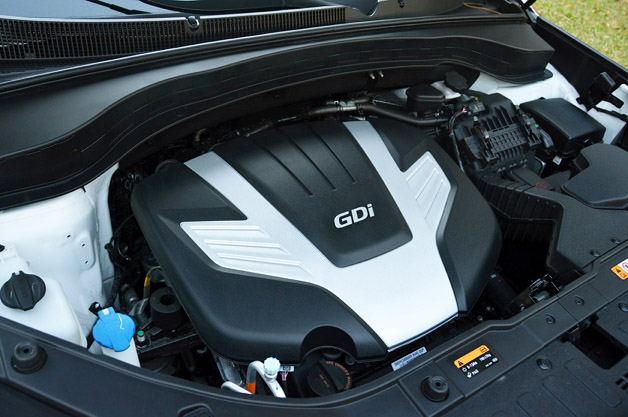 Another big change for 2014 is the addition of electric power steering with the driver-selectable modes found on many Kia and Hyundai models. The system allows drivers to tailor steering effort to suit their taste, but it doesn't alter the ratio or improve road feel, which remain weak points. In a few instances, we found the Sorento's steering to be a little jerky, but we don't see the average CUV buyer being put off by the system's lack of feedback.

Like its exterior, the Sorento's cabin looks similar to last year's model, but is in fact very different. The most noticeable change is a redesigned center stack and center console with a larger touchscreen infotainment display, a concentrated organization of buttons and controls and a T-handle shifter that feels like it was pulled from a luxury car. That attention to detail is also evident in newly rubberized soft-touch knobs for the audio and HVAC systems. The front seats would prove to be plenty comfortable for our road trip, and in addition to offering heat and ventilation functions for front occupants, there is now an additional 1.2-inches of rear legroom to go with the sliding and reclining 40/20/40 second-row seats. The third-row seat (a $1,000 option), is still intended for smaller occupants, but one nifty feature back there is the separate control for rear HVAC fan speed. Another interesting detail about the Sorento that buyers with babies will love is the LATCH anchors built into the front seat brackets for the tethers of rear-facing car seats. As befits a family-first vehicle, they are very useful and make it much easier to install child seats quickly and correctly.

Spending six hours strapped into any car is a good way to learn its strengths and weaknesses.

Spending six hours strapped into any car is a good way to learn its strengths and weaknesses. Minor gripes include a driver's seat bottom that won't lower enough and window switches that feel a little too far back on the driver's door panel, but our biggest complaint could be the Sorento's newest cabin tech. On all but the base model, the Sorento now comes with a seven-inch TFT display, but its level of customization is disappointing. This screen provides great resolution for vehicle information, audio and navigation functions, but the majority of the TFT's real estate is used to display an analog speedometer with no ability to customize the layout. Other additions for 2014 that are appreciated include manual rear side window shades, a programmable power liftgate and a redesigned panoramic roof with a single, power-retractable shade and smaller cross support for a more open viewing experience.

Following in the footsteps of its popular Optima sedan (as well as its newer Cadenza and K900 models), the 2014 Sorento has also added this new range-topping SX Limited model, which comes at a $3,300 premium over the Sorento SX's price and is only offered in a limited color palette – black, silver or pearl-effect white. The true benefit of the SXL package is on the inside, where the Sorento adds Nappa leather seats, dark wood trim, heated second-row seats and soft-touch, suede-like headliner and pillar trim. This package also brings 19-inch chrome wheels and red brake calipers. We think the latter looks a bit aftermarket-tacky, and the bigger wheels conspire to make the same-size brake rotors look a bit undersized. 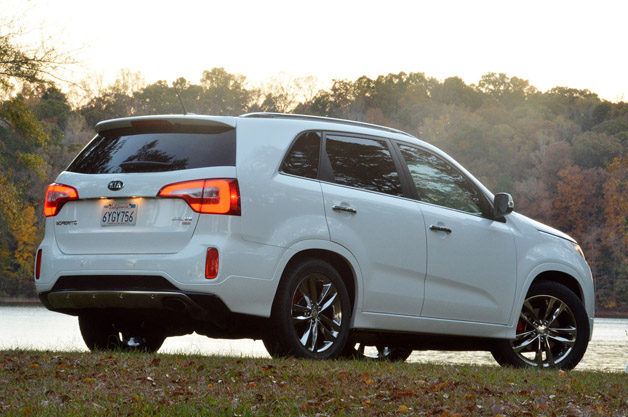 Of course, such luxury doesn't come cheap. Taking a giant leap up from the Sorento LX V6's $26,500 base price, our 2014 Sorento SXL came with an as-tested price of $40,795 (with delivery and destination) – that's without optional all-wheel drive. At that price, you're looking at close to an even swap with CUV offerings from some prestige brands, though most of them will be smaller and offer far less equipment.

More importantly, the Sorento is somewhat of a middle-ground CUV, as it's larger than vehicles like the Honda CR-V, Ford Edge and Toyota RAV4, yet it's smaller than other three-row crossovers like the Ford Explorer, Chevrolet Traverse, Nissan Pathfinder and even its platform-mate, the Hyundai Santa Fe. Indeed, it has a smaller footprint than those vehicles, but it's also substantially lighter and quicker, while offering interior measurements that aren't completely out of the hunt, either. As third-row seats often go unused in these vehicles and cargo bays aren't always full, we like the idea of this easier to drive, easier to park tweener size.

Regardless of which crossover you buy, as enthusiasts, it's still hard for us to get too excited about any of these three-row vehicles. However, it's also hard to argue with them as practical, comfortable family transportation. The 2014 Sorento delivers all of the goodies buyers expect from a family-friendly utility vehicle, and it does it with improved styling and refinement in a well-sized package. Toss in the all-new SX Limited trim level, and buyers now have a whole host of new reasons to consider the Georgia-built Sorento. 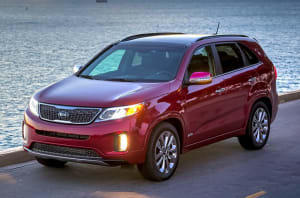