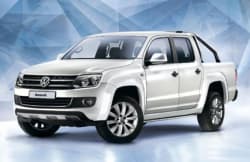 Volkswagen Group is taking its role as the official vehicle partner of the 2014 Winter Olympic in Sochi, Russia, very seriously. It is supplying over 3,000 Volkswagen, Audi, Skoda and commercial vehicles to the games, but the Polar Expedition Amarok, which it built a year ago to promote the event in Russia's most remote regions, is definitely the most exciting of them.

Three trucks were built to take nine people on an expedition from Moscow some 9,942 miles eastward by road to the city of Petropavlovsk-Kamchatsky on the Kamchatka peninsula, and it earned the team a Guinness World Record for the longest off-road journey through a single country. The 66-day odyssey was the first to reach Kamchatka from Moscow by driving over the glacier-covered Sredinny Range.

The specially built Amaroks received a host of upgrades to take on the cold and complete lack of roads. The team replaced the front and rear suspension with long-travel, heavy-duty shocks and massive knobby tires to ensure traction in deep snow and ice. The body was kept stock other than cutting out the fenders to fit the wheels and tires. ​The 2.0-liter turbo diesel engine remained mostly untouched because the goal was reliability, not speed. For added safety, the interior was fitted with a roll cage, and the trucks had extra navigation equipment to make sure the team didn't get lost.

While it's not anywhere as cool as the Amarok Polar Expedition truck, Volkswagen is also offering an Amarok Sochi Special Edition (above right) in Russia with additional exterior chrome trim, 18-inch wheels, navigation and an updated interior. If Mercedes-Benz can figure out a way to sell the G63 AMG 6X6, then VW needs to find a way to sell a real version of the Amarok Polar Expedition truck to customers.