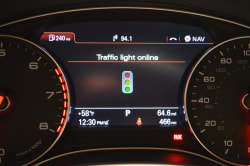 Before taking a ride in Audi's impressive Piloted Driving A7, we took a short spin up and down the Las Vegas strip to check out a smaller, but intriguing piece of Audi driver assistance technology called Traffic Light Assist that promises to help drivers make every green light.

Using both live and predictive data beamed into the vehicle's navigation unit via onboard wifi, TLA doesn't need a single camera to tell you when the light is going to change. Local data sources provide information about traffic light patters, and the in car system uses that data and the motion of the car to predict exactly how long it'll be until the green light goes red.

In practice, the system shows a traffic light icon in the central display (a head-up display would be a nice option), along with a countdown timer that reads the number of seconds before a light changes from red to green. Additionally, the system corrects (nearly instantly in our demo) for changing lanes and resultant changing signals; changing a straight-through traffic lane to a left-turn lane and signal, for instance.

What's more, the stop/start system is integrated with the new software, as well, restarting the engine with a few seconds to go before the light in front of you changes to green. Pretty slick.

Audi set up a trial of the system in a A6 sedan around the Las Vegas Strip, and it worked pretty flawlessly for us. The only time it was tripped up was when we pulled off into a casino driveway to change drivers; here the navigation system still placed us on the neighboring road. Of course, this is an issue that crops up with navigation systems themselves, too, not specific to Traffic Light Assist.

Audi has been testing the new technology in Ingolstadt and Berlin in Germany, as well as in Verona, Italy, in addition to the test it set up in Vegas for the purposes of CES. The good news is that, even in this beta form, the implementation of the software was as simple as patching in to the existing A6 CPU. Implementation of Traffic Light Assist on a consumer level would have more to do with getting the proper streams of traffic signal data from cities across the world rather than a problem with installing it in each car. They're working on it.