Japan may be best known, at least among motorcycle enthusiasts, for its sport bikes. But as we found at the Tokyo Motor Show this year, Japanese motorcycle manufacturers are capable of producing all kinds of motorbikes. And to our delight, that includes cafe racers.

Along with the myriad electric bikes, dirt bikes, crotch rockets and scooters, the halls of Tokyo's Big Site convention center this year were full of the retro-infused rides we love. Chief among them was the Bolt (shown above) which Yamaha exhibited alongside their various electric two-wheelers, sporting a delicious metallic blue paintjob, inverted handlebars and hanging mirrors, machined metal bits, blacked-out trim and saddle brown leatherwork. 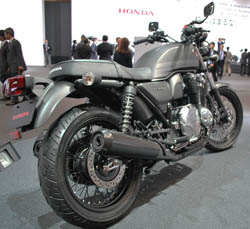 Honda was also on hand with a new EX version of its '70s-style CB1100 retro roadster in sinister and low-key matte black. And this was our first chance to check out BMW Motorrad's new birthday present to its 90-year-old self, the R NineT, a model recently unveiled at the EICMA motorcycle show in Milan. But one of the most amusing retro rides we came across was the Honda Monkey Limited, a mini bike that makes the new 125cc Grom (which was displayed alongside it) look positively gigantic.

While we were at it – and to show some fairness to the riders who aren't as enamored of cafe racers – we also scoped out Honda's new F6C (a new custom-style take on the company's flat-six cruiser once known as the Valkyrie) and BMW's new track toy, the HP4. There's plenty to see with six galleries of high-resolution live shots from the show floor, so jump on in and take a look.