Chevy releases the rest of its SEMA-bound truck concepts Chevrolet has, so far, let a slow trickle of information about its SEMA trucks reach the public. Yesterday, we showed you the Cheyenne Concept. In September we saw a pair of trucks, the Silverado Black Ops and Silverado Volunteer Firefighter, that will be on display this week at SEMA but debuted at the Texas State Fair. Now, we have the full deluge of details on all of Chevy's modded pickups.

Brad Paisley and Chevy teamed up for the blue truck you see above. Called the Brad Paisley Signature Silverado, the country star's logo is worked into the truck's design, while 22-inch wheels from the Chevy Accessories catalog are set off by a two-inch drop in the truck's suspension. Paisley's design carries over to the cabin, which features blue suede inserts on the leather seats and a Kicker sub for bit more bass in your country music.

Scroll down to see the rest of Chevy's truck lineup for SEMA. 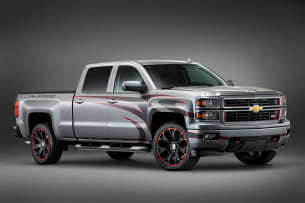 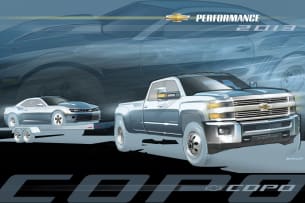 Tony Stewart loaned his design talents for a custom Silverado, as well. Based on a Silverado LTZ Z71 model, the Tony Stewart Concept (above, left) sports Dark Tarnished Silver paint, smoked head and taillights and a few items from the Chevy Accessories catalog, including those stylish 22-inch wheels. There's also some tribal style graphics that give this concept some Bro-Truck cred.

Chevy will also be showing off the towing potential of its new Silveardo, with the HD Dually tow vehicle (above, right). When it hits the show floor, the show truck will have a trailer with the new COPO Camaro aboard, along with a spare engine and transmission in the bed. A few items from the Accessories catalog will also be fitted, like chrome steps, a tool box and bed lights.

With the recent debut of the new Suburban and Tahoe, the fact we're seeing modded examples at SEMA should come as no shock. The Suburan Half-Pipe Concept (above) is just the sort of thing we'd expect to see in Park City, Aspen or Whistler: a big, comfy and capable SUV to tote skiers and snowboarders around. Twenty-two-inch wheels from, you guessed it, the Chevy Accessories catalog are joined by roof racks for skies and snowboards.

If you'd like to know what the Secret Service will be driving around in a few years time, have a look at the Tahoe Black Concept (above). Naturally, the exterior trim has been blacked out, while 22-inch, dark gray wheels from the Accessories catalog have been fitted. Smoked headlamps and tinted windows round out the package. 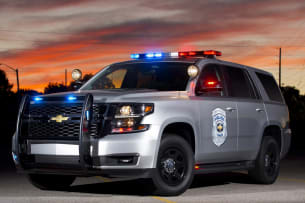 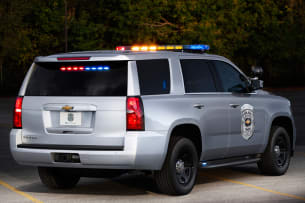 LAS VEGAS – Chevrolet today revealed six new concept trucks and SUVs on the eve of the SEMA Show, the annual convention of automotive performance parts and styling accessories. The uniquely styled vehicles represent performance and personalization variations of the 2014 Silverado 1500, as well as the all-new 2015 Silverado HD, Tahoe and Suburban.

The concepts include the performance-oriented, lightweight Silverado Cheyenne, a Brad Paisley signature-edition concept, a sinister-looking all-black Tahoe and even a Tahoe police vehicle. Each wears genuine Chevrolet Accessories available from Chevrolet dealerships, allowing customers to personalize their trucks to their interests.

"Chevrolet's lineup of full-size trucks and SUVs is all-new and stronger than ever," said Chris Perry, vice president of Chevrolet marketing. "No matter what your needs, whether it's hauling lumber to a work site, delivering your kid's soccer team to a game or towing your boat on a weekend fishing trip, Chevrolet has the vehicle with the capability, dependability and connectivity today's truck customers want."

In addition to the concepts introduced today, Chevrolet is also showing the Silverado Black Ops and Volunteer Firefighter concepts unveiled in September. Throughout the SEMA Show, Chevrolet will give a Silverado Z71 Crew Cab a personality makeover daily, changing its appearance from luxury to sport to work-truck and to outdoors themes – all to demonstrate the depth and breadth of Chevrolet Accessories.

"The accessories enable customers to tailor their new Chevy truck with an unprecedented level of personalization options," said Perry. "They're the perfect complements to already comprehensive packages of performance, capability and versatility – and they can be installed by the dealer for a seamless buying experience."

The all-new EcoTec3 6.2L V-8 that powers the concept truck is rated at 420 horsepower and 460 lb-ft of torque – the most power in the light-duty truck segment. It's not available in regular-production Silverado regular cab models, giving the Cheyenne a 65-horsepower and 77 lb-ft boost over the production 5.3L V-8. A Borla performance exhaust system adds an authoritative note to the 6.2L's output.

The stance is lowered two inches and red brake calipers are visible through the black wheels. There's also a Borla performance exhaust system.

Inside, Paisley's Silverado is equipped with a rear-seat entertainment system and a Kicker subwoofer that enhances the audio system with richer sound. Paisley also helped select the cabin's color and trim, which includes blue suede inserts in the black leather seats – accented with blue stitching – and additional anodized blue interior trim.

Tony Stewart Silverado concept
It takes a strong truck to live up to the speed, energy and passion of Tony Stewart. This Silverado LTZ Z71 concept was designed in conjunction with Stewart, with personal touches and Smoke® graphics that symbolize his racing spirit. The exterior also features a Dark Tarnished Silver color, tinted headlamps and taillamps, and several Chevrolet Accessories components available through Chevy dealers, including a tonneau cover, four-inch chrome assist steps and 22-inch wheels with a custom finish. Inside, the Stewart's signature is embroidered on the headrests.

The Silverado Volunteer Firefighter concept has plenty of room for personal gear such as a turnout coat and pants, firefighter helmet, air pack and gloves. Outfitting includes tools and safety equipment needed in a support vehicle including:

Silverado Black Ops concept
The Chevrolet Silverado Black Ops Crew Cab 4x4 concept was designed to be ready for anything. It builds on the truck's strength, performance and safety with features designed to offer support in an emergency – including custom-fabricated lower body armor and a lockable, bed-mounted Truck Vault storage unit. It holds a solar power pack, a pair of gas masks, gloves, military first aid kit, folding shovel and rope.

Inside, custom-trimmed black seats with yellow piping complement additional yellow trim throughout the cabin. A comfortable and well-connected environment includes Silverado's MyLink system with available navigation – displayed on an eight-inch color touch screen. Standard USB and other accessory inputs make it easy to upload favorite songs from a smartphone or other media source.

Suburban Half-Pipe concept
The 2015 Suburban Half-Pipe Concept is equipped to haul adventurers and all their ski and snowboard gear to the slopes. It's equipped with Chevrolet Accessories' roof rack and crossbars to mount skis and other equipment along with Chevrolet Accessories 22-inch wheels and center caps for a more distinctive appearance. Inside, passengers can be entertained with a Blu-ray-based rear-seat entertainment system and leather-trimmed seats. Fold-flat second- and third-row seats make it easier to haul cargo inside the 2015 Suburban.

Tahoe Black concept
A lowered stance and all-black profile lend an aggressive appearance to the Tahoe Black concept – a stylized look at the all-new 2015 Tahoe arriving in in Chevrolet dealer showrooms early next year. The dark appearance is reinforced with blacked-out exterior trim, Chevrolet Accessories 22-inch wheels custom-painted dark gray, tinted headlamp lenses and tinted windows all around and an aero-style body package. Inside, the Tahoe is trimmed in black leather with Carbon Flash Metallic trim accents.

Tahoe Police concept
Chevrolet is readying a police version of the new Tahoe, and this concept offers a look at how law enforcement will be hitting the highway in it in the near future. The full complement of emergency lighting and police equipment is comes with the Tahoe 9C1 police package's standard equipment, including a 5.3L V-8 engine rated at 355 horsepower, a six-speed automatic transmission, 17-inch steel wheels, police-specific suspension and auxiliary battery for emergency equipment.