The real telling moment for the new BMW i division will be seeing how the recently tested 2014 i3 sells in its various markets, since that is the car that changes how we perceive our expectations of the brand. But this 2015 BMW i8 green supercar has all the earmarks of a slam-dunk project, we just needed to drive it and make sure for ourselves.

BMW has a spectacular test facility in southern France, called Miramas, and that's where we just had our first brief go behind the wheel of the i8. There were three cars for us there and they were dressed up in exactly the same paisley camo that we've all seen in the spy photos published everywhere for the past year. The interiors, though swathed in masking to hide all the details, varied in their color.

As opposed to our realization that driving the stink out of the i3 was not the right attitude, with the i8 we were mostly encouraged to do exactly that by the entire BMW project team. Our essential takeaway from this event is that even BMW feels much more at ease splashing the i8 around with the media, because they're certain we're going to enjoy it. Even if the technology underneath is all new, this is the type of product BMW knows how to do in its blood and bones. 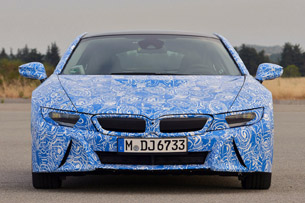 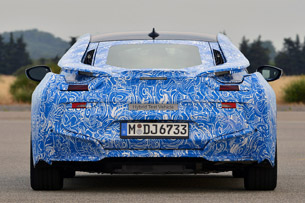 It has a very simple and almost entirely familiar driver-car interface.

One comforting factor with the i8 is that it has a very simple and almost entirely familiar driver-car interface. The i3 has a whole sheaf of things to get used to for the targeted first-time BMW buyer, but the i8 is immediately a sports car we can deal with, a car with which an existing BMW fan can get very cozy.

There is nevertheless much in common here with the Life Drive construction philosophy seen in the i3, and to be seen on all i models yet to come. The strong and lightweight i8 passenger cell is designed for a maximum 2+2 family, or 2+1 executives going to a business lunch. It's rendered in BMW's well-publicized Carbon Fiber Reinforced Plastic formed material, and the fairly lightweight chassis is made of rigid aluminum. 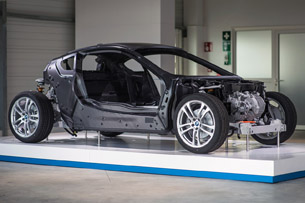 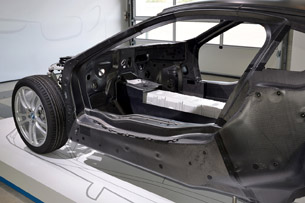 It can do really well in everyday sub-40-mph city runs, remaining almost at all times in EV mode.

While the i3 plug-in comes in a straight EV flavor as well as a range-extended version, the i8 – referred to as project i12 internally – is a parallel hybrid plug-in e-sports car that can be commanded to stay in pure EV mode for certain limited distances under appropriate circumstances. Thus, the i8 can do really well in everyday sub-40-mph city runs, remaining almost at all times in EV mode. But it can also sip the liquid fuel like a hardcore diet even while indulging the Sport mode of the powertrain to go beyond 40 mph, returning an overall – let's say ambitious at this point until we know for sure – 90-ish miles per gallon in liquid fuel terms from the 10.5-gallon tank situated underneath the rear seats.

The electric motor is the exact same unit used in the i3, and here it sits over and minutely in front of the front axle while driving only that axle. On the i3, stressing the powertrain's EVness, this Bosch-produced generator creates 168 horsepower and 184 pound-feet of torque using energy from the 22-kWh lithium-ion battery slab in the floor. For the i8, the dynamo creates 129 hp and still 184 lb-ft using energy from the 6.4-kWh lithium-ion pack that runs the length of the central tunnel right behind the e-motor. And then there's the basic two-speed GKN transmission that can operate at lower speeds around town and in v-max territory via a longer gear. 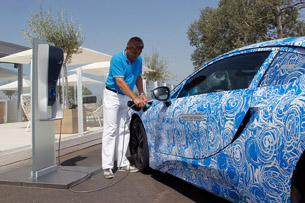 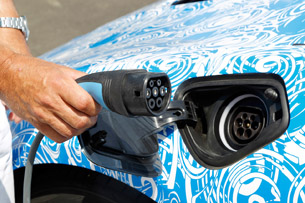 The i8 is technically a through-the-road, all-wheel-drive hybrid.

The 1.5-liter B38 transverse three-cylinder turbocharged gas engine is placed in back nicely, just in front of the rear axle and it drives only that axle, so the i8 is technically a through-the-road, all-wheel-drive hybrid. The engine provides 228 hp and 236 lb-ft of torque, and the standard Boysen exhaust system (as fitted to all M cars) proved completely awesome-sounding while we danced around Miramas in Sport mode with the stability control switched off. There is also a second, smaller electric motor (13 hp and 81 lb-ft) snugly fitted next to the gas engine in the rear. It's there mainly as a generator/alternator to collect energy and charge the batteries, but can directly power the rear wheels to help smooth out the gas engine coming online. In concert, the entire powertrain system working together produces a combined 357 hp and 420 lb-ft of torque.

We tried all modes, of course, and while BMW still has six months to refine the few remaining issues on these validation test prototypes, the more we drove the i8, the more the huge financial investment required hit us as a brave yet valid move by BMW. Whether in its most timid coffee-fetching eMode+Eco Pro setup or in Sport with DSC off, you'll be happy with what you're feeling if our happiness is anything to go by. A full recharge from the (not included) wall box given the smaller capacities of the lithium-ion battery, takes just two hours. 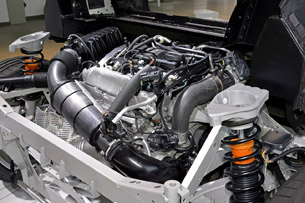 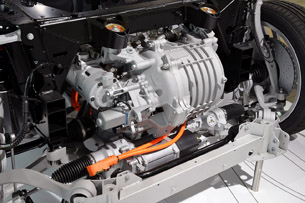 We had just a few pieces of constructive criticism for BMW's assembled team.

We had just a few pieces of constructive criticism for BMW's assembled team in hopes that they'll improve the car even moreso. Firstly, the iDrive display is currently almost useless in any sort of sun due to its forward placement and cobalt blue typeface. Second, programming for the six-speed automatic attached to the 1.5-liter is fine in all aspects except at the extremes of its envelope, and it needs a 7,000-rpm redline to better suit the gearing and the exhaust's character. And finally, we wanted better summer tires – ours were the optional 215-width front and 245-rear Bridgestone Potenzas. Dynamics were really hot overall from this relatively lightweight, stiff, and extremely low-center-of-gravity BMW i, but it needed just a tick more help at the corners from the rubber.

There is fore-aft torque monitoring happening and any vectoring side-to-side is left to the stability control suite alone, so the overall feeling at the limit could be better and perhaps not quite so neutral. But the i8 truly is an all-wheel driver, so we should have expected no less than this sort of sensation. 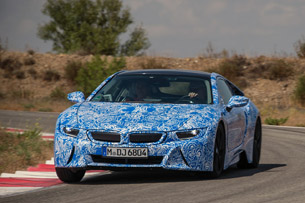 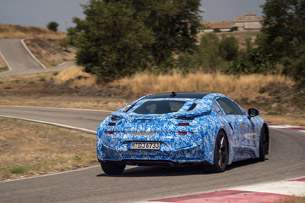 Acceleration to 60 mph can happen in under 4.5 seconds.

The i8 is expressly not a racecar, nor is it a Nürburgring lap time record hunter. And although such shenanigans will doubtlessly be mentioned eventually, they are not at all a priority at launch. This is a street car and, according to the BMW i team, it needed to be maximized as such. For now, at least, leave the Nürburgring boasts to the M division.

Electric range can vary widely based on how the i8 is driven, of course, and the topmost speed allowed for the e-motor/front-wheel-drive mode is 75 mph. With everything up and running, though, top speed is let out to 155 mph, and acceleration to 60 mph can happen in under 4.5 seconds. That's pretty great for a "boring old" hybrid, we'd say. And the feeling while doing all of this in the sport seat is almost-M-sensation terrific. The steering is ultra-electrified, yet at the same time, very precise. When switching to Sport, the dampers automatically switch to a more rigid setting, yet we enjoyed the ride over both smooth surfaces and imperfect pavement. Braking – quite the regenerative affair, of course – is immediate and sure, aided by the standard, very light and aero-friendly forged 20-inch wheels.

Look for pricing and other heretofore unmentioned specifics to be laid out prior to the September world debut of the production car at the Frankfurt Motor Show. Deliveries to North America and the entire world will happen "around April" of next year, and we hope to have a fuller evaluation of a naked and unashamed i8 for you before then. We suspect it'll be worth the wait.