Steven J. Ewing
Acura hasn't done a whole lot with its aging TL line in recent years, the sedan only getting a very mild refresh for the 2012 model year. And while we don't see that changing anytime soon (as we reported earlier, the car is likely going to be replaced with a new TLX sedan that will serve as the replacement for both it and the smaller TSX), Acura is offering this new 2013 Special Edition TL, priced from $37,405 *plus $895 in destination fees.

The new TL SE slots in just above the base model and below the TL with Technology Package in terms of pricing, but offers a bit more in the way of added content. Special Edition features include unique 10-spoke, 18-inch alloy wheels, a body-colored decklid spoiler and the appropriate SE badging. Keyless entry with pushbutton start is also standard on the Special Edition model, and the whole package is available in four exterior colors – Bellanova White, Crystal Black, Graphite Luster and Silver Moon – all with a dark leather interior.

Acura will offer the Special Edition with the TL's base engine, a naturally aspirated 3.5-liter V6 good for 280 horsepower and 254 pound-feet of torque, mated to a six-speed automatic transmission. The Special Edition is on sale now, and you can peruse all the other official details in Acura's press blast below.
Show full PR text
New Acura TL Special Edition Debuts with Key Feature Upgrades

Slotted between the TL and TL with Technology Package, the TL Special Edition offers popular added features at a tremendous value

The new 2013 Acura TL Special Edition is now on sale with a manufacturer's suggested retail price (MSRP) of $37,405. Joining the TL line as a mid-2013 model, the TL Special Edition offers a step up from the standard TL, with the addition of highly desirable feature upgrades, creating an incredible value in the luxury four-door sedan segment.

The TL Special Edition's standard Keyless Access System lets the driver enter and drive the car without having to handle a key or fob. The Keyless Access Remote has a unique digital identity that is automatically communicated to the car; the driver simply pulls one of the front door handles while the remote in his/her possession and the door unlocks and opens. When carrying the fob (or if all doors are unlocked), the trunk can be opened by pressing a button located on the TL Special Edition's rear spoiler.

The system identifies which of the two supplied fobs is in use each time the driver's door is opened (even if it is already unlocked), and then automatically sets the driver's seat, steering wheel, outside mirrors, climate control and audio system (including audio system presets) to a profile preset by the driver using that fob.

The TL recently earned the top-level rating of TOP SAFETY PICK+ from the Insurance Institute for Highway Safety (IIHS), including a GOOD rating in the IIHS' new small overlap frontal barrier crash test. The new IIHS small overlap frontal barrier crash test is designed to simulate a collision between a vehicle traveling 40 miles per hour and a fixed object, such as a utility pole, where only 25-percent of the vehicle's front structure is engaged by the opposing object. According to a 2009 study by the IIHS, such small overlap crashes accounted for nearly 25-percent of frontal crashes resulting in a serious injury or fatality.

The 2013 TL SE is produced using domestically and globally sourced parts at Honda of America Mfg., Inc., in Marysville , Ohio, recipient of the J.D. Power and Associates' Silver Plant Quality Award in its 2012 Initial Quality Study. 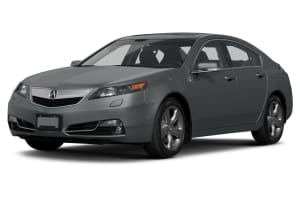