Think about Lexus for a second. Odds are your gray matter is busy regurgitating images of the company's middle-aged RX crossover or possibly the midsize ES sedan. As the volume movers for Toyota's luxury fleet, the two are the default ambassadors for everything with an italicized L pinned to the grille, and that's a damned shame. As the 2013 GS450h is so willing to point out, Lexus engineers are busily crafting models that offer drivers more than a safe luxury choice.

As the master of fuel-sipping battery propulsion, Lexus has brought the impressive width of Toyota hybrid engineering to bear on the GS450h. The result is a vehicle that manages to sneak its hybridness by you with buttery acceleration, stone quiet operation and brakes that don't feel like you're trying walk around the house in Velcro socks. The drivetrain doesn't feel the need to beat you over the head with its battery pack or announce to the neighborhood that you're saving the world one whispery mile at a time. Both driver and passengers get to enjoy a luxury car that just so happens to be a hybrid instead of the other way around.

There's no denying just how striking the GS has become outside. For all the ridicule Lexus endured for its new Predator-maw corporate look, the design snatches eyeballs quicker than a cross Master Pai Mei. Up front, the nose manages to look fresh without straying into garishness, though Lexus designers are walking a fine line here. While the LED daytime running lamps are a bit derivative, we love the complex and sculpted lower valance. Like other hardware in the Lexus toolbox, the GS gives you plenty to look at head on.

Look closely and you can see one of the few hybrid badges tucked just below the rear door and ahead of the back wheel.

Shift to the machine's side, and the GS offers a familiar profile. Attractive forked-spoke 18-inch wheels do a smart job of filling the fender wells, and the contoured lower sill adds a little bit of drama to an otherwise safe broadside. Look closely and you can see one of the few hybrid badges tucked just below the rear door and ahead of the back wheel. We can cope with advertising on this scale, especially in a segment that's been known to employ gaudy vinyl graphics on more than one occasion.

Around back, the 2013 GS450h boasts a set of aggressive LED taillamps joined by a tasteful chrome strip. The lights join a gently arched trunk deck that gives the sedan's tail some personality, and the hidden exhaust outlet goes a long way toward cleaning up the machine's derrière. Miraculously, Lexus managed to resist the temptation to slap another hybrid badge on the trunk lid, a feat worthy of copious applause.

The GS delivers an impressive amount of space, with rear passengers enjoying a bit more leg room than in a 5 Series.

Step indoors, and the big cruiser reveals a strikingly handsome cabin, thanks in no small part to a slathering of matte bamboo wood trim. The carpentry finds its way onto the door panels, the dash, the steering wheel and center console to offer up a sharp contrast from the black and white hides found elsewhere inside. Throw in a few brushed aluminum accents and the 2013 GS450h easily bests comparably appointed BMW cabins. What's more, the GS delivers an impressive amount of space, with rear passengers enjoying a bit more leg room than those getting hauled about in a 5 Series. The big Lexus also bests the BMW in front legroom, as well.

But if the GS shines anywhere inside, it's on the tech front. Lexus continues to eschew a traditional touchscreen infotainment interface in favor of its Remote Touch center console-mounted mouse and button system, and while the gadgetry takes a bit of time to use confidently, we found the system to be considerably less distracting than trying to reach halfway across the cabin to mash a screen with your finger. The gear also allows Lexus to employ a massive 12.3-inch LCD that can house plenty of information about climate control, navigation and audio settings.

The cabin is gimmick free, though the gauge cluster does have one trick up its sleeve.

More importantly, the cabin still retains simple buttons and dials that make adjusting the vehicle's systems simple and intuitive. In an era when so many manufacturers are keen to jump on touch capacitive and touchscreen-only interfaces, Lexus deserves an award for showing some restraint.

By and large, the cabin is gimmick free, though the gauge cluster does have one trick up its sleeve. When the driver switches between the various drive modes in the GS450h, the tachometer switches suits accordingly. You can take a look at the tech in action in the Short Cut below.

EV mode is more for sneaking up on friends in the grocery store parking lot than saving fuel.

Pop the hood and you'll find an Atkinson-cycle 3.5-liter V6 paired with a water-cooled electric motor. The two can propel the GS independently or as a team with a total system output of 338 horsepower. Alone, the direct-injected engine can crank out 286 hp at 6,000 rpm and 254 pound-feet of torque at 4,600 rpm while sucking down the required premium fuel. The 650-volt electric motor, meanwhile, is good for a maximum of 200 hp. Technically, there's a second 650-volt motor on board to handle duties ranging from controlling engine speed and starting the gas engine as well as generating power for the 6.5 amp-hour nickel-metal hydride batteries, but that motor doesn't spin the rear wheels or play a role in the regenerative braking process.

Power from both the engine and the electric drive motor gets funneled to the back tires courtesy of an electronically controlled continuously variable transmission, and while that's typically a recipe for driving death, the GS450h actually manages to keep the transmission from raining on everyone's parade. Thanks to a little electronic wizardry, the driver can choose between a total of five drive modes, including Snow, Eco, Normal, Sport S and Sport S+. There's technically an EV mode, too, though given the laughably short range under electron-only power, it's more for sneaking up on unsuspecting friends in the grocery store parking lot than saving fuel.

Eco mode smoothes out throttle inputs, mutes seat heating and dampens climate control output in an attempt to get the absolute best fuel economy possible. Technically, the Environmental Protection Agency says the 2013 GS450h should be good for 29 miles per gallon in the city and 34 mpg on the highway. We didn't spend too much time in Eco mode, and saw around 30 mpg in combined driving. Let's just take a moment to focus on that number. That's 30 mpg with our notoriously frisky right foot in a vehicle that tips the scales at 4,190 pounds and can scoot to 60 miles per hour in 5.6 seconds. Numbers like that can bring a tear to a grown man's eye.

And it's not as if the GS is a straight-line pointer. True, Eco and Normal drive modes offer up the kind of driving dynamics typically associated with Oldsmobiles of days gone by, but drop the car into Sport S mode, and the big barge cleans up nicely. Throttle mapping and transmission logic grow a bit more energetic, and Sport S+ mode sharpens up the steering and suspension damping in ways that shouldn't be possible. The transformation isn't so much Dr. Jekyll and Mr. Hyde as it is Betty White and Optimus Prime. This jam shouldn't be possible.

Sport S+ offers fairly communicative steering, and paired with the sedan's excellent brakes, you get something bordering on a sport sedan the size of a small Kansas county. While we're accustomed to regenerative brakes that are more binary than progressive, the GS450h slowed in a nice, easy and predictable manner every time we kissed the pedal. Other automakers would do well to replicate the system.

Of course, Lexus is plenty proud of what it has created here. The GS450h starts at $59,450, but our tester came loaded with $11,040 in options. That put our final figure at $71,385, including an $895 destination fee. If that number's not big enough for you, keep in mind a similar stack of cash will land you in hardware like a Mercedes-Benz CLS, or even a well-appointed, drop-dead sexy Audi A7. Those machines are more stylish, offer a better driving experience and a more attractive cabin. Odds are we don't have to tell you where our hardly earned dollar bills would go if we were we handing over a stack of 70,000 of them, fuel economy be damned.

Cool your jets with the option sheet, however, and the 2013 Lexus GS450h is an impressive all-around package, managing to provide a nice slice of driving enjoyment while also delivering excellent technology, attractive aesthetics and plenty of room for everyone onboard. If this is the new face of Lexus and the shape of hybrid propulsion moving forward, we like what we see. 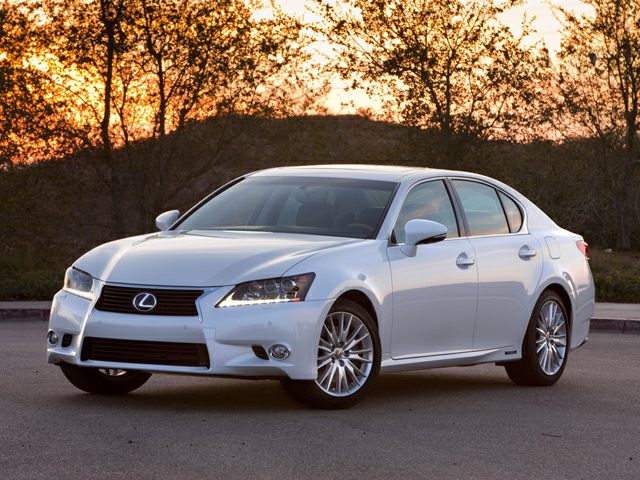