The little black cab is to London what the yellow Ford Crown Victoria has been up to New York City. With the departure of Ford's Panther platform, Nissan has stepped in with its all-new NV200, which will soon be spreading like kudzu over NYC streets. It seems that London may also share the Big Apple's fate in adopting Nissan's new minivan as its taxi of choice.

The NV200 will scoot around London's tight city streets with the help of a 1.5-liter inline four, making 89 horsepower, but more importantly, returning 53 miles per gallon. That fuel-efficent engine also results in a 50-percent dropoff in CO2 emissions compared to the older cabs. It also meets the requirement of having a turning radius of 25 feet or less.

In terms of the rider's experience, the NV200 looks to be a vast improvement. The sliding doors provide easier access on either side of the vehicle, which has seating for five. The front passenger seat has been removed in favor of extra storage space, and there's a USB charging port located in the passenger cabin.

Nissan says its NV200 complies with all handicap regulations and has been approved by the London Taxi Drivers Association and disability groups, and that it will be priced "significantly below" the London Taxi Company's TX4, the current version of the UK's iconic black cab.

All well and good, but can it be turned into a hotel room? We shall see. Check out Nissan's new cab in the videos available by scrolling down.


Nissan today REVEALS a new vision for the future of the London 'black cab' and its 300,000 daily users – the Nissan NV200 London Taxi.

Already unveiled as an official new cab for Tokyo and the exclusive New York City 'Taxi of Tomorrow', the new cab will pick up their first fares on London's streets in Spring 2014.
Currently there are only two alternatives for London's 22,600 cab drivers, the traditional 'LTI TX4 and the Mercedes Vito.

The NV200 will generate 50% less CO2 than the best current taxi model (139g/km vs 209g/km) – in line with Mayor Boris Johnson's Air Quality Strategy for London.

The NV200 will also be 50% more fuel efficient than the best current alternative, its 1.5 litre engine achieving 53.3 mpg (miles per gallon) versus 35.3mpg. The average London cab travels 120 miles a day, so it will see cabbies save almost £700 a year.

The NV200 will also be priced very competitively and significantly below the current equivalent, the London Taxi Company's new TX4 model.

It will comfortably seat five adults – three on a rear bench with two on rear-facing, fold-down seats. All will be able to admire the London skyline through the 1.2m2 transparent roof. Its sliding doors are much safer for pedestrians, cyclists and other vehicles because they do not swing out to create a potential obstruction.

The eNV200 - London's first electric taxi - is expected to hit London's streets in 2014 too. With running costs estimated to be around one fifth of a conventional, diesel-powered Hackney Carriage, its launch will arrive six years ahead of the Mayor's target of 2020 for the introduction of a zero emissions taxi.

Nissan already has a respected place in the Capital's taxi history – its 2.7-litre TD27 diesel engine was chosen for the iconic FX4 Fairway black cab in 1989, which introduced improved speed, reliability and efficiency to the London cabbie's daily drive. The same engine also featured in the Fairway's successor, the TX1. 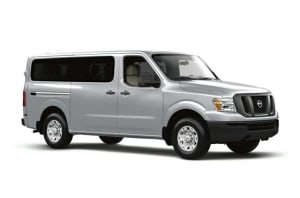