We see the form versus function fight played out on a daily basis in the automotive realm. Designers, engineers and accountants lock horns on every model that ever makes its way to the street in order to come up with a suitable compromise that will successfully appease their respective masters. More often than not, a vehicle's more stylish aspects are left by the wayside as aerodynamics, packaging and economics hammer automotive forms into the same uninspired mold. Anyone who remembers the muscular form of the Chevrolet Volt concept need only look to the limp lines of the production model to see the process in action.

It's something special when an automaker cries "Damn the torpedoes!" and drives an undiluted concept design off of the auto show stage and straight into production. Pupils dilate, cheeks flush and hearts flutter with primordial do-want. Such is the case with the 2012 Range Rover Evoque Coupe. In an era when most automakers wouldn't waste firing a single synapse on the personal utility segment, Land Rover has kicked open the doors on an arena long thought forgotten. With its heart-stopping styling, powerful turbocharged four-cylinder engine and surprising off-road chops, the Evoque is exactly what we've been missing from this segment. But who's going to buy it?
The luxury CUV segment has just begun toddling out of its infancy. While buyers have been content to snap up full-size, gas guzzling beasts wrapped in leather since the early '90s, manufacturers have only recently begun offering smaller, more efficient models on tall-riding platforms. The BMW X3 has offered buyers an alternative to top-heavy beasts like the BMW X5 and Range Rover Sport since its debut in 2003, but with an overall length of 183 inches, the vehicle isn't exactly small by city center standards. The Mercedes-Benz GLK, meanwhile, nips nearly five inches from the X3's stem-to-stern dimensions to offer buyers a more modest runabout, but even that machine dwarfs the Evoque Coupe.

With a total length of 171 inches and a wheelbase of 104.7 inches, the 2012 Range Rover Evoque Coupe can't help but look athletic. Up front, the vehicle offers the world a scowling, bull dog face. The vehicle's short, domed hood forms a linear brow for the HID headlights and split metal grate grille, and the front fascia features deep insets for a set of LED fog lamps. Down low, a contrasting faux skid plate serves as a curled lower lip. With its sizable 20-inch wheels pushed far forward, the Evoque looks ready to head off road with a 25-degree approach angle, which is comparable to the X3 at 26 degrees and the GLK at 23 degrees.

The 2012 Evoque manages to balance the aggressiveness of its front valance with a stunning and elegant profile. With a raked windshield and a dramatic tapered roof, the CUV has managed to stay true to the company's LRX concept that first debuted at the 2008 Detroit Auto Show. Exaggerated wheel arches work with strong character lines and well-executed details give the eye something to chew on. We've always counted ourselves as fans of the Range Rover floating roof, and the pillarless design is particularly striking here.

Move to the vehicle's stern and you're met with what could possibly be the world's smallest rear window. The demure rear glass is a byproduct of the tapered roof employed on the Evoque. Despite its size, Land Rover engineers managed to squeeze in a similarly tiny rear wiper. The Evoque makes use of a surprising amount of plastic body cladding, and while we typically recoil at the first hint of the quickly fading material, the cladding simply works here. That's especially true on the rear valance, where the painted and raw black plastics give the vehicle's aft considerably more texture than simple paint alone could manage.

Land Rover kindly incorporated rear fog lights on the 2012 Evoque – a feature that greatly increases a vehicle's visibility in fog, snow and dense rain. Our week with the CUV was mired in foul weather more often than not, so we were glad for the added illumination. Whereas our cousins in Europe have enjoyed rear fog lights for generations, this tech has been slow coming to the States.

We've seen plenty of show-circuit escapees bring heart-stopping exteriors to production only to leave us stuck with ill-envisioned cabins. The Pontiac Solstice Coupe, fifth-generation Chevrolet Camaro and first-generation Dodge Viper all greeted the world with sheetmetal that dropped underwear for fun and profit but came equipped with interiors molded from Tupperware slag. For its part, the Range Rover Evoque is innocent of that folly. Despite our tester's black-on-blacker interior, the cabin offered well-executed ergonomics and the kind of materials we've come to know and love from Range Rover.

Having spent its hard plastic budget on exterior cladding, the Evoque keeps most surfaces soft-touch inside. The dash offers brushed metal accents paired with soft rubber covers. The material feels every bit like shark skin, and the matte finish helps class up otherwise plain innards. The cockpit feels relatively cozy, thanks in part to a high center stack that effectively divides the driver and co-driver's spaces. Since our tester came equipped with a six-speed automatic transmission, the console wore the same dial-o-matic gear selector as the Jaguar fleet. While some critics have bemoaned the hardware, your author prefers it to a protruding stalk from the steering column or a cumbersome shift lever jutting from the center console.

The 2012 Range Rover Evoque offers excellent front seating with contoured, leather-dipped buckets for front occupants. The bolstered thrones would be happy in a low-slung sports car, and finding them in a tall CUV is a pleasant surprise. Despite being a coupe, the rear seats are large enough for full-growns adult, though expect to be patient when it comes time to access the second row. Instead of a quick mechanical release, the seats must be operated by an electric switch. The mechanism moves forward with the kind of patience that only the fabulously wealthy can afford, leaving the rest of us ready to rip the bucket out of the vehicle if only to save a few seconds of waiting for the grave.

While there's plenty to gush about in the Evoque, we're 100-percent smitten with the vehicle's optional expansive glass roof. Check out our Short Cut below to see what we mean.

Under the hood, the Evoque delivers more than adequate power via a Ford-sourced turbocharged 2.0-liter direct-injection four-cylinder engine. With 240 horsepower and 270 pound-feet of torque, the engine can kick the 3,902-pound CUV to 60 mph in 7.1 seconds. At any point, the small-displacement four-pot can summon up suitable levels of thrust for quick interstate passes or darting around in downtown traffic. Much of that flexibility is a byproduct of the vehicle's six-speed automatic transmission, which has no problem finding the perfect gear for the situation at a moment's notice. Automatic all-wheel drive is, of course, standard.

While Land Rover took the time to incorporate all of its off-road know-how into the Evoque, we're betting most buyers won't come close to exploring the vehicle's capability. We spent our time with the CUV jousting with the rest of humanity on America's interstate system over the Thanksgiving Holiday, and the vehicle proved to be the perfect weapon for dispatching hour after hour of mindless miles. The Evoque offers a surprisingly quick steering ratio that helps give the vehicle a decidedly playful feel – a sensation that's underscored by a willing throttle response and incredibly capable brakes. The whole platform feels light on its feet despite its actual girth, and the Evoque simply feels good to drive as a result.

We were a bit concerned the scant rear glass would result in mammoth blind spots out back, but rearward visibility wasn't much of an issue. Surprisingly enough, we found ourselves having issues seeing forward, specifically in intersections, thanks to the vehicle's oversized side-view mirrors. The mammoth pieces of looking glass are crucial for minimizing blind spots out back, but can safely conceal a full-sized pickup on the passenger side from the driver's point of view. Likewise, they can make parking or navigating off-road obstacles a bit of a bear.

If that's the price we have to pay for the enjoying the Evoque's styling, we'll take it. Unfortunately, Land Rover will ask you to hand over more than your unobstructed forward view if you want to put an Evoque Coupe in your garage. The vehicle carries a base MSRP of $43,995 plus destination, though our tester landed well north of that figure at $57,896 including $750 in destination fees. What does over $14,000 worth of options look like on an Evoque? For starters, opting for the Coupe designation will cost you an additional $1,000 over the five-door model, and our tester came laden with journalist-pleasing attributes like the stylish Dynamic package, complete with a unique front and rear fascia, louvered hood and other goodies. Throw in a set of 20-inch alloy wheels and a climate package with heated windshield, steering wheel, seats and windshield washer nozzles, and it's easy to see just how quickly the bottom line can climb.

This begs the inevitable question: Who's going to buy the Land Rover Evoque? At the end of the day, there's no sensible reason to choose this vehicle over the available competition. During our time with the vehicle, we did manage to see up to 25 mpg highway and 21.5 mpg combined, and the Environmental Protection Agency estimates buyers should be able to net 18 mpg city and 28 mpg highway. Those figures are more than respectable for a 4,000-pound CUV with a legitimate all-wheel-drive system, but the vehicle's slim cargo area and steep price tag effectively render the fuel economy value argument null and void.

Fortunately, buying a vehicle in this segment is rarely about what you need, and the 2012 Evoque has a unique knack for making onlookers want to be behind the wheel. With its emotive styling and precise driving dynamics, we could have spent another month behind the wheel without complaint. Land Rover just needs to translate that sort of yearning into actual hard sales. Based on all of the eyeballs that followed our Coupe and the amount of award hardware the Evoque has won so far this year, we don't expect that will be a problem. 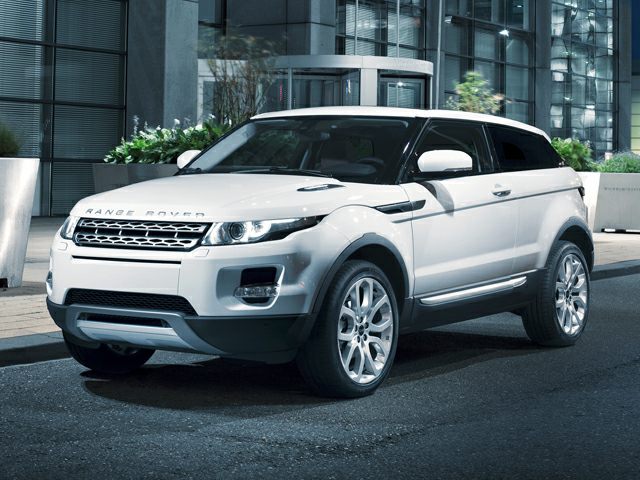