Cadillac has earned itself a gaggle of five-star ratings from the National Highway Traffic Safety Administration's New Car Assessment Program for the 2012 CTS sedan and wagon and SRX crossover. The CTS earned four stars for the rollover test, but five stars in the frontal and side tests, giving it a score of five stars overall. The SRX returned the same results and the rakish CTS Coupe hasn't yet been rated.

Follow the jump for videos of both Cadillacs earning their stars and for a press release with more information.

The Cadillac models were tested under NHTSA's revised New Car Assessment Program implemented for the 2011 model year. The overall rating is based on frontal and side crash tests in addition to rollover resistance testing. Under the new system, the four test conditions are combined mathematically into an "Overall Vehicle Score."

Under this methodology, Cadillac's SRX and CTS sport sedan achieved an overall vehicle score of five stars – the highest rating possible - even though some individual ratings, such as rollover, resulted in four-stars. NHTSA applies the results for the CTS sedan to the sport wagon model because of its similar body structure and safety equipment.

"Receiving five stars under the new rating system is an impressive feat – one that clearly demonstrates the strength of the SRX and CTS advanced structure, overall crashworthiness and effectiveness of the models' state-of-the-art safety technologies," said Gay Kent, GM executive director of Vehicle Safety.

The SRX and CTS sedan and wagon are designed to help drivers avoid crashes, while protecting occupants in the event a crash occurs. Standard safety features include:
- Driver and front passenger dual-stage frontal and seat-mounted side pelvic/thorax air bags and head curtain side air bags with rollover protection that cover front and outboard rear seating rows.
- Rollover sensors which can activate the head curtain side air bags if sensors determine an imminent rollover. In a rollover, the air bags stay inflated longer to provide increased occupant protection.
- StabiliTrak electronic stability control helps the driver maintain control by comparing the path being steered by the driver with the actual response and, when necessary, applying the brakes or adjusting the throttle or a combination of both.
- Four-channel disc brakes with ABS for sure stops and full-function traction control to make the most of available traction.
- Front safety belt pretensioners to reduce forward movement and load-limiting retractors to help manage forces during a collision
- OnStar, which features the Automatic Crash Response System that uses GPS and cellular phone technology to automatically call for help in the event of a crash that deploys the air bags.
- Active front seat head restraints on CTS sport sedan and wagon that help reduce the risk of neck injury in low-speed rear collisions
- Side blind zone alert system on CTS models use sensors to detect and warn drivers of vehicles or objects in the side path of the vehicle.

The SRX is also designed to meet European pedestrian protection standards; and the front bumper is positioned for greater compatibility with car bumpers.

Starting with 2011 models, NHTSA introduced tougher tests and more rigorous requirements for its five-star ratings that provide more information about safety feature performance and crash-avoidance technologies. Changes included a new side pole test simulating a 20-mph side-impact crash into a 10-inch-diameter pole or tree at a 75-degree angle just behind the A-pillar on the driver's side. 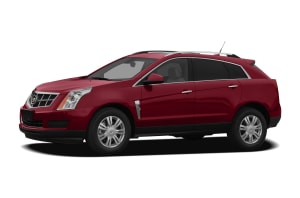