Earlier this year, executive editor Chris Paukert and I were chatting one morning about the 2011 Audi A6 he was driving – a car that would soon be replaced with the sharp new 2012 model you see here. Of course, we discussed how the car's styling was growing a bit long in the tooth, but aesthetics aside, Paukert's overall impression of the 2011 A6 was that it was still "pretty damn good."

Fast-forward a few months, and I'm standing in front of the 2012 A6, its full-LED headlamps glaring at me, its new sheetmetal stretched over a more aggressively styled body, complete with new aluminum components that reduce overall weight. The engine, Audi's 3.0-liter supercharged V6, was carried over from the 2011 model, albeit fitted to a brand new eight-speed Tiptronic automatic transmission. And inside – oh, inside – is a suite of technologies that will embarrass the collective staff of an Apple store.

Let's start at the beginning, or rather, the front, where our test car greeted us with Audi's latest lighting innovation – angular, full-LED headlamps in a style similar to what was first introduced on the A8 and then later used on the A7. The A6's eyes are arguably the most stunning of the bunch, with the nicest overall integration to the front fascia. We won't argue that the other two cars – the A7, specifically – aren't stunning beasts to behold, but there's something about the A6's front end that piques our interest the most.

A quick word about those headlamps – you may notice that some A6 models have what appear to be blank placeholders for fog lights in the lower air intakes, but in reality, it's all a façade. Those are instead the sensors for the adaptive cruise control, and with the optional full-LED lighting system, traditional fog lights aren't available. "With really good headlights, you don't need fog lights," one Audi representative told us. See the full front lighting song and dance in our Short Cut video below.


The rest of the A6's exterior design is simple seductiveness, with shorter front and rear overhangs compared to the 2011 model. That's thanks to a nearly three-inch-longer wheelbase, but an overall length that has actually been shortened minimally. The wider and lower stance of the 2012 model gives it a more enthusiastic aura than the old car, too, and when fitted with the 19-inch alloy wheels of our test car, the end result is an Audi that's chock full of curb appeal. Fit your A6 with the S-Line kit and optional 20-inch rollers and you'll have a car that mimics the upcoming S6 in terms of overall presence.

Around back, the LED headlamps are mimicked with full-LED taillamps that are, again, similar to what you'll see on the Big Daddy A8. S-Line models like our test car get a unique diffuser with dual exhaust tips, and even the subtle, thin red taillamp running lights add a touch of elegance and exclusivity to the A6's rump. Pull up behind one on the road at night and you'll know exactly what's in front of you.

Inside, the cabin is typical Audi goodness, with a sophisticated overall style and fine materials that blend together nicely. Truthfully, we admit that we don't love the glossy wood finish found in our test car, only because we've fallen head-over-heels in love with the natural wood grain available in the A7 and A8. Audi offers the natural wood console inlays as a no-cost option, and if you insist on having wood rather than brushed aluminum, trust us, you'll want the natural, matte finish stuff. It really classes up the joint.

The real pièce de résistance, though, is the amount of technology that's crammed into the A6. Here you'll find Audi's second-generation MMI infotainment system, complete with a touch pad for alphanumeric input (see Rex Roy's first drive for the full demonstration), Google Earth-based navigation and even a mobile wireless hotspot, so you can do as we did, and let your passenger surf the Internet on an iPad while cruising through town. The Jetsons may have had flying cars, but even those didn't have Web connectivity.

The 2012 A6 is powered by the same supercharged 3.0-liter V6 as the previous model, boasting 310 horsepower at 5,500 RPM and 325 pound-feet of torque available as low as 2,900 RPM. In this 4,045-pound sedan with Quattro all-wheel drive, that supercharged force is good for a 0-60 time of just 5.3 seconds with a top speed of 130 miles per hour (electronically limited, of course). Compared to a heavier, less-powerful BMW 535i xDrive, the Audi will reach 60 mph a full three-tenths of a second quicker.

Right now, the supercharged six is the range-topping powertrain in the A6 lineup. Audi offers a 211-hp, 258-lb-ft version of its well-known 2.0-liter turbocharged inline four-cylinder as well, and – pay close attention here – a 3.0-liter turbo-diesel V6 will be offered in the A6 in the not-too-distant future. We're stoked for the oil-burning powerplant to make its way Stateside, but in the meantime, we have nothing bad to say about the supercharged unit currently offered.

We continue to be impressed by the fantastic linearity of this 3.0 TFSI engine, and its similarities to that of a naturally aspirated V8 are uncanny. Plenty of power is available throughout the entire rev range, and the eight-speed Tiptronic unit keeps the car right in its sweet spot of about 3,500 RPM when you're seriously hustling along long stretches of two-lane backroads. Around town and while highway cruising, the automatic is happy to shift up as soon as it can, but is quick to fire off downshifts the moment your right foot digs back into the throttle. Be nice, and you'll have no problem matching the EPA fuel economy ratings of 19 miles per gallon in the city and 28 mpg on the highway. Audi estimates a conservative 22 mpg combined figure, but our numbers were closer to 23.5 after a week of mixed driving.

The beautiful thing about the A6 is how nimble it feels on the road. A comparable BMW 5 Series is almost 200 pounds heavier than the 3.0T Quattro A6, and it's really quite noticeable. The A6 feels like a larger A4 rather than a smaller A8, and by contrast, feels more akin to a BMW 335i than its direct competitor, the 535i. No, no, no – the A6 is not nearly as sure-footed as a 3 Series, but when it comes to things like steering and balance, we'd take the A6 over the 5 Series, no questions asked.

Speaking of which, Audi's Drive Select system allows you to alter just how much involvement you want with things like steering, suspension and drivetrain. After playing with this system for hours to find our perfect combination, we preferred to leave the chassis and steering in Dynamic mode, but kept the engine in its automatic setting, since we didn't want to outright slaughter our fuel economy numbers. Like we said, the 3.0-liter super-six is fantastic on its own, and doesn't need to be shifting and revving all of the time in order to produce a great driving experience. In Dynamic mode, the steering loses the Audi-typical dead on-center feel, and its levels of feedback and directness are top notch.

If a 5 Series is on your shopping list, you really want to drive the A6 before plunking down the cash. The BMW is a fantastic car from behind the wheel, but seriously, this Audi is class-leading stuff.

The 2012 A6 is simply another chapter in Audi's aggressive product rejuvenation strategy, spearheaded by the A8. We've only had nice things to say about it, the A7, and now the A6, and frankly, this car isn't just "pretty damn good" anymore. It's better. 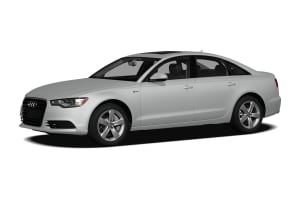