Electric vehicles are comparatively expensive, but Ford bucked that trend

CHICAGO — The single most shocking thing about the 2022 Ford F-150 Lightning when it was revealed was the price. A base Pro starts at just $39,974. The XLT starts at $52,974, and a fully-loaded Platinum at $90,474. What’s so surprising about those prices is how close Ford is flirting with gasoline-engine F-150 price equivalents — and that's before consumers take advantage of federal and state tax incentives. History has consistently shown us that electric cars tend to be more expensive than their gasoline-powered equivalents, but that’s much less the case with the Lightning.

Build out an F-150 XLT to a similar spec as the Lightning — four-wheel drive, Supercrew, EcoBoost V6, big touchscreen — and you’re left with a pickup in the low $50,000 range. That’s spitting distance to the Lightning. A similar thing happens when you perform this same comparison with other trims, too. We’re not calling either the Lightning or the regular F-150 cheap by any means, but the relatively minor price disparity between the two is noteworthy.

The Chicago Auto Show was our first chance at seeing it up close and in-person. While oogling it around the stand, we caught up with Darren Palmer, general manager of Ford’s Battery Electric Vehicles division, to find out how Ford managed its pricing. The answer is largely a simple one — scale — but there are a couple of other choices Ford made to get the Lightning to where it needed to be that we’ll explain later, too.

“But then we work on how we get it for the right price, because I wanted it at a price that is within gas price or nearby,” Palmer says. “Because then the barrier is gone. The psychological barrier in the mind. Once they’ve flipped, they’ve gone for it, they never want to go back. But getting them to flip, because their current truck works pretty well, it’s hard.

“So I knew I had to break that barrier,” Palmer continues. "So the top half of this truck has a scale of 4 million units. That seat, we buy 4 million of. We get the best price in the industry. The front trunk, apart from the unique components, the whole rest of the truck, we get 4 million units.” 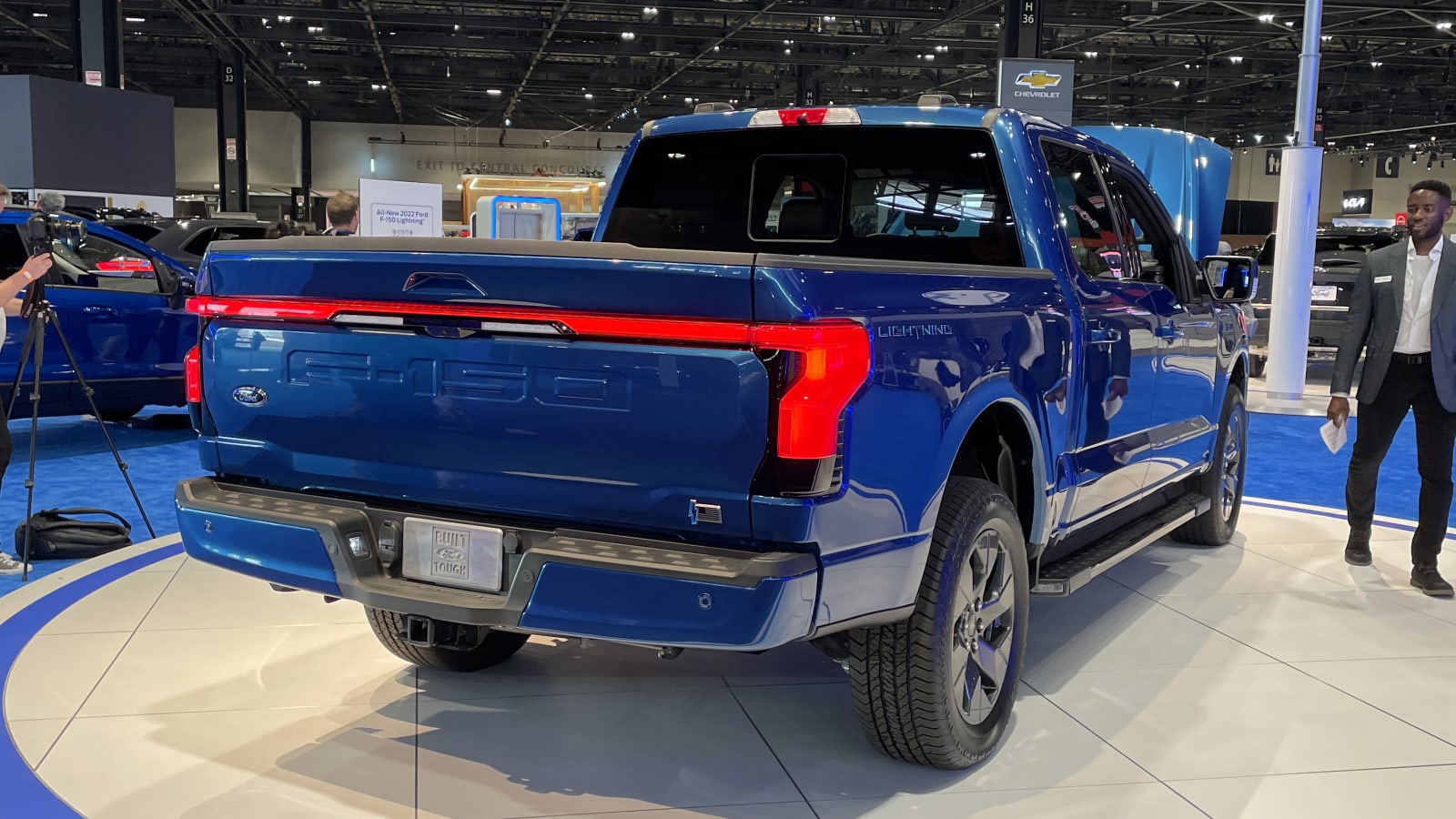 The secret to a low price isn’t much of a secret, really. It’s staring you right in the face with the giant F-150 body and interior that is hardly changed from the gasoline F-150 that is the best-selling vehicle in the country today. A massive number of parts used in every other F-150 are also used in the Lightning, giving Ford scale for an electric pickup that they don’t even sell in scale yet. It just makes sense.

“The frame at the bottom is all-new with all-new suspension, but it’s through the same supplier who makes our other frames,” Palmer says. “And they’ve got the facility, so we work with them to produce the all-new frame, but at a reasonable price point, given the fact they build a million frames for us.”

The list of parts sharing goes on, but what about the expensive electric components and battery pack?

“And then share the motors and ESCs, speed controllers, charging chargers and the battery with many other vehicles in our portfolio,” Palmer goes on to say. “The next-generation of SUVs coming, the larger trucks, and the SK Innovation batteries. So we get great scale, and we share the components and technology in them, which means we get great value in the electric system.”

Yes, Palmer is basically saying that there will be more electric trucks and SUVs in Ford’s lineup that use the battery and electric motors in the F-150 Lightning. That’s exciting to hear, seeing as how all these components are nearing production-ready status. More big Ford and Lincoln EVs are definitely on the way. He went on to assure us that Ford will indeed be making a profit on the Lightning. Otherwise, the bosses wouldn’t approve such a venture, Palmer told us.

There’s one last thing that Palmer mentioned that helps with the price and image of the truck in the beginning. We asked him why the Lightning was only available in a single configuration, and not the unending number of options offered on the gasoline F-150.

“Number one, this is the most popular configuration by far  — that's a 5.5-foot box, full-size truck and Supercrew — that’s one that made it easy,” Palmer says. “Secondly, the cost-saving for taking some of these things out, it’s not worth it to the customer at that price point at the moment. We’re already cheaper than gas. We’re already giving what most people want. We don’t need it yet. One day in the future, we may go for it. We’ll see how it goes, but we didn’t need it just yet. These are gonna be compelling as is. Later on, we’ll see where demand stays.”

Rather obviously again, offering the Lightning in relatively few configurations helps Ford keep the price in check. It also allows Ford to advertise the Lightning as the mother-of-all F-150s. Since there’s no basic rear-drive model, Ford can say that the Lightning (no matter what one you choose) beats the gasoline truck in many key performance metrics like power, acceleration and other capability categories.

In the end, we have the gasoline F-150’s scale to thank for allowing the electric model’s price.

“All those together," Palmer concludes, "means we can offer a product at a price lower than anybody."